DALLAS — A recycling site for shingles in southern Dallas has turned into a mountain over the last three years, now known by the nickname “Shingle Mountain." Residents living near it fighting for its removal are able to breathe a little easier now that the city put out a call for bids to remove it. However, they’re not celebrating just yet, as it could still be several months before the 70,000 ton monstrosity is hauled away.

Nine companies submitted bid proposals to the city of Dallas on Sept. 24 for the job of loading and hauling away 175,000 yards of shingles. The mountain, located at 9527 S. Central Expy in Dallas, will be hauled about a quarter of a mile around the corned to the McCommas Bluff Landfill.

Council member Tennell Atkins, who represents District 8 where Shingle Mountain is located, released a statement Sept. 29 to updated on the progress of finding a contractor. He said the city is on the cusp of awarding a contract worth $450,000 to clean up Shingle Mountain. The city manager recommends the lowest responsible bidder.

"It is my hope that this item passes unanimously when it comes to City Council on October 13, 2020, and cleanup begins soon after,” Atkins said. “I have worked tirelessly to gather together parties to resolve this issue and supported the city when the issue needed to be escalated to get things done. This is a win for southern Dallas, environmental justice, and reaffirms our commitment to protecting the environment.”

Resident Marsha Jackson has spent nearly three years next door to the massive pile of shingles and other debris, and she’s ready to see the unwelcome neighbor go.

"Somebody asked me one time from the city staff, ‘Well, is it the beauty of it that you just don't want?' No, it’s not the beauty, it’s the health. The main focus is the health of the community,” Jackson said.

Jackson has lived in her home off of Choate Road for more than two decades, well before the mountain started forming in January, 2018. She wears long sleeves to keep the fiberglass from irritating her skin, and she’s also going to a pulmonologist now for the first time in her life. 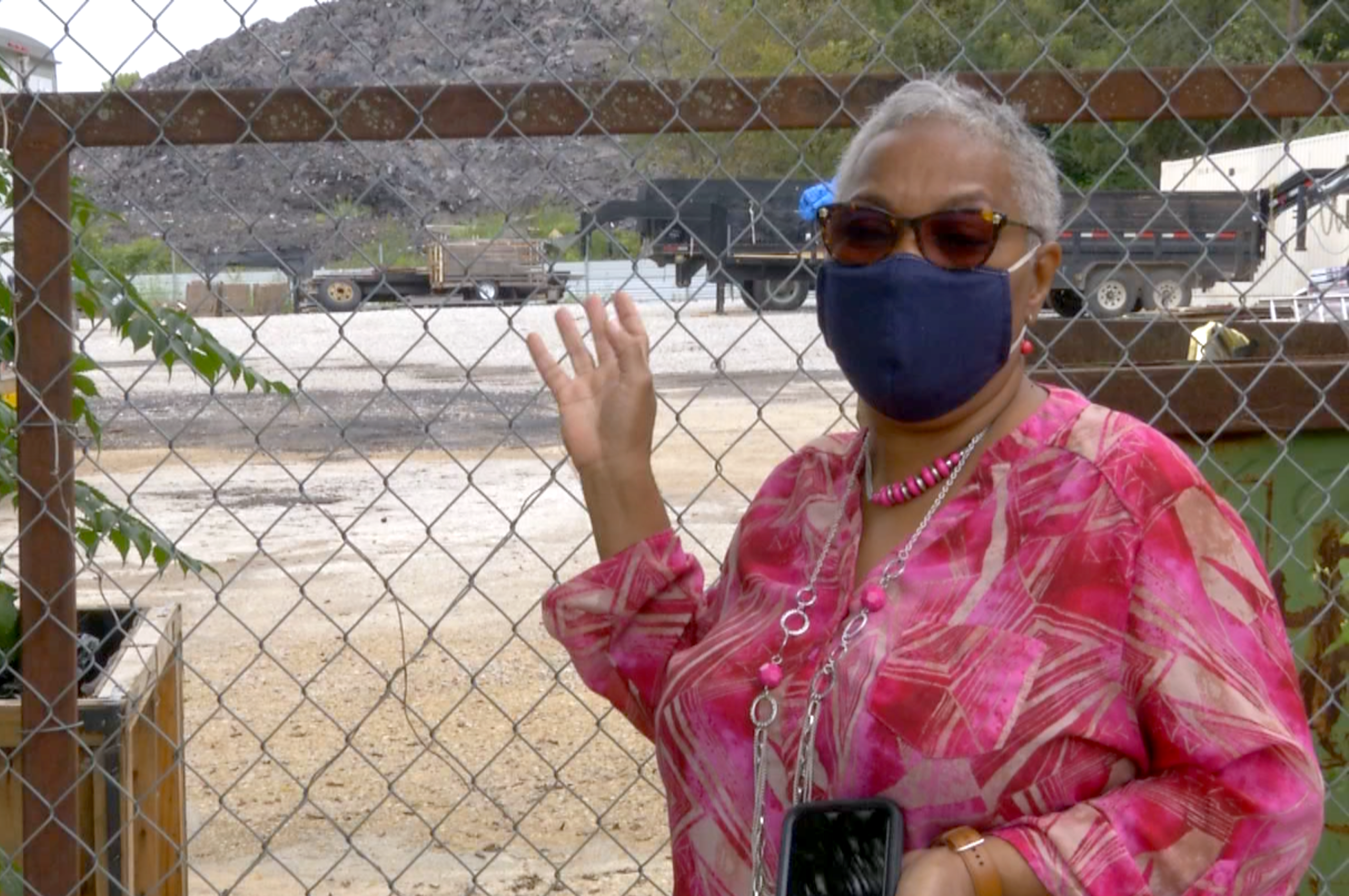 "And I also have an ENT that have gone to, I go to a speech therapist. Because she's teaching me to kind of control my vocal cords, because that starts to get all in between my vocal cords and it’s inflamed just like when you have a flu or a cold. And the inflammation just keeps popping up around my vocal cords every time I talk. So that's one thing that they’re trying to control and trying to tell me how to take a deep breath because I'm putting too much strain on my vocal cords when I tend to talk,” Jackson said.

The mountain is made up of raw shingles and ground up shingles, which is supposed to be recycled to be used in creating asphalt pavement. However, the company in charge of doing so went bankrupt over the last couple years. So, the mountain remains the unsightly neighbor to Jackson and other residents off Choate Road.

"The ground up shingle is airborne and it’s fiberglass. Those pollutants are airborne, you can see how — it takes my voice because the airborne pollutants have been flying, and they fly into our throats,” Jackson said. “[My pulmonologist] told me, ‘Marsha, I hate to say this and it's just honest, that the only way that you really can be improved, either they move that stuff, or you move, or you die. This is a slow killer and they are not understanding it is slowly killing us.” 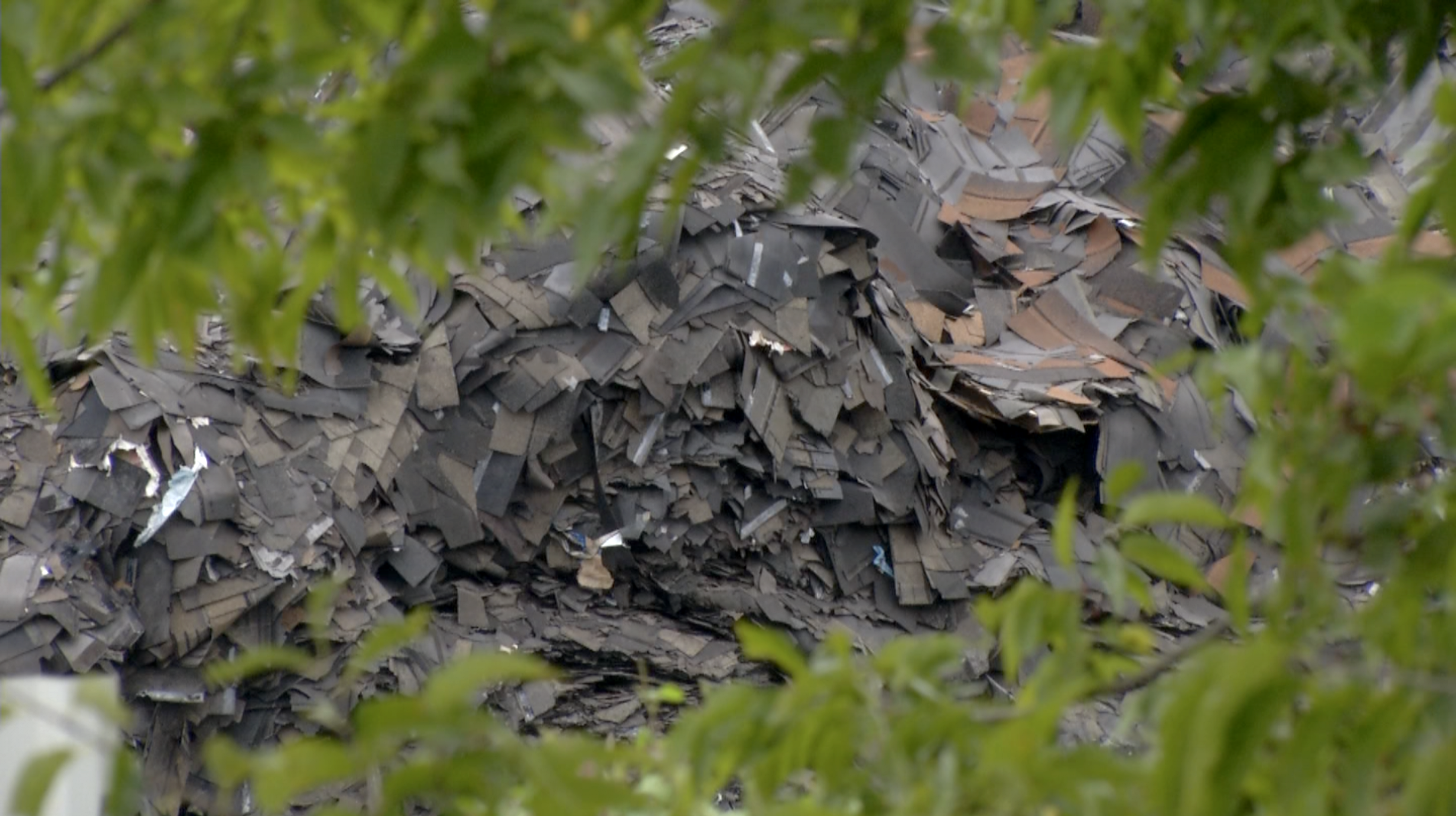 The 70,000 ton mountain is the product of a shingle grinding and recycling operation that got out of hand, says Jackson. The company responsible faces lawsuits from Jackson and the city of Dallas.

This is unacceptable. Dallas has to do better for all residents and communities. https://t.co/briDifEyjV

“They was bringing in too much, and too much business was coming in before they could grind it up. So really, they knew that it was too much business coming in, they should have shut it down instead of trying to worry about getting that money in their pocket like that,” Jackson said. "They said they filed bankruptcy, so they just really walked away, and that I have a problem with. How you allowed them to come over here and destroy this neighborhood the way they do it, destroy our life? And they just walked away."

Jackson said there’s a glimmer of hope now that the city is hiring a contractor to move the pile. But there’s nothing to celebrate until the mountain is hauled away for good.

Jackson and environmental conservation organization Southern Sector Rising has been fighting, protesting, and campaigning against Shingle Mountain. The group feels the mountain is a result of “racist zoning, forcing industrial polluters into predominantly Black and Brown residential neighborhoods." 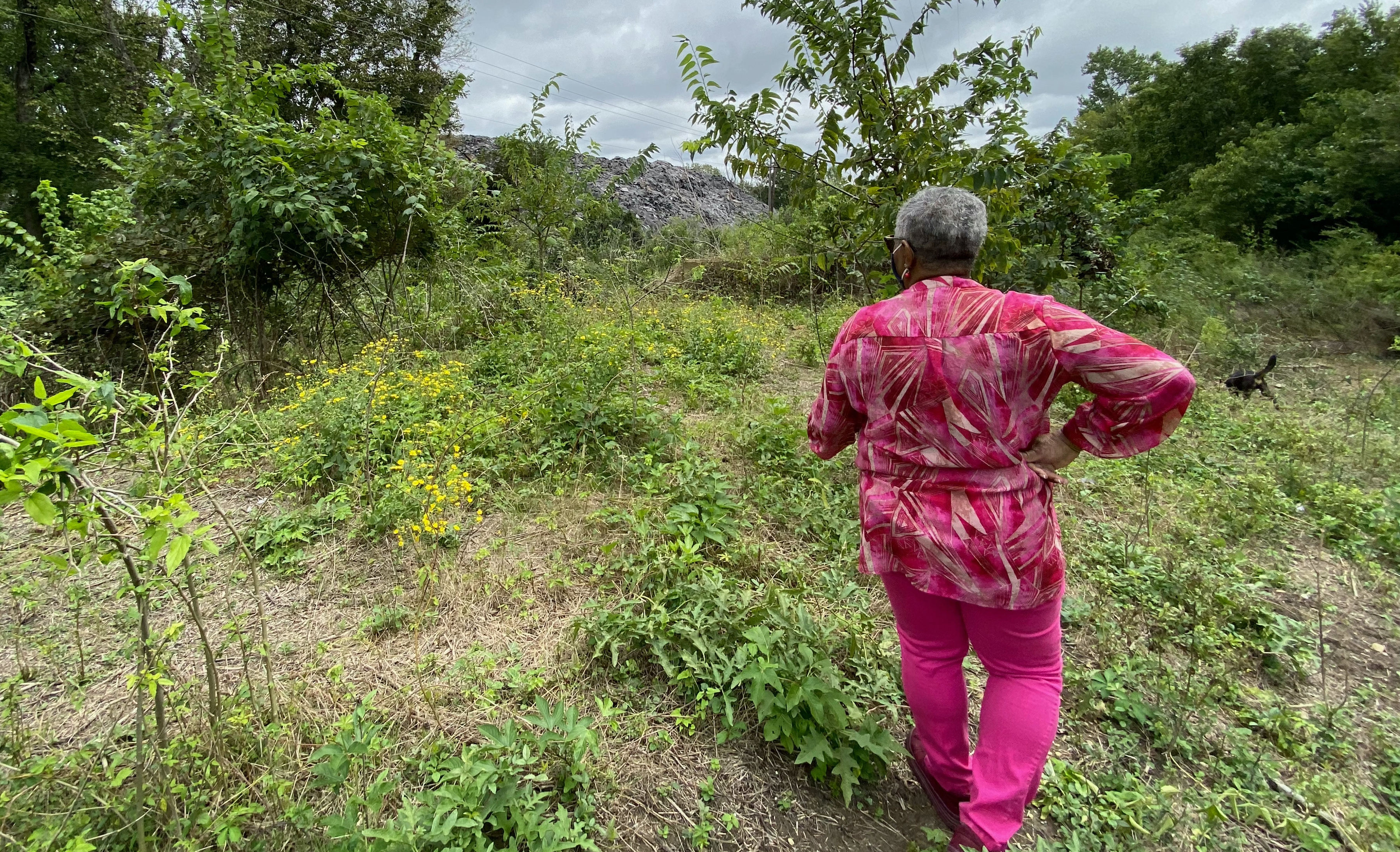 "This is the Black and Brown community. So you know, I guess we're just not important as everybody else,” Jackson said. “[SSR is] working now also to try to get it rezoned because my property is Agricultural. This is over here is for Heavy [Industrial], so you know, this never should have happened at all. Not this close to our family's home. Just imagine, right that that fence, that's less than 50 feet from my bedroom. I’ve been working with Jim Schermbeck and we organized SSR. And our goal for SSR is to continue fighting for nothing like this to happen in anybody else's neighborhood, because it is an environmental injustice. And what people are not understanding, environmental justice is just as important as racial injustice if anything else.”

A grassroots group Jackson is a part of, Downwinders at Risk  is also committed to environmental justice in North Texas. The chairwoman of the group, Evelyn Mayo, published a study called “Poisoned by Zip Code,” which shows the area where Shingle Mountain is located is the zip code most polluted with particulate matter in Dallas. A recent hyperlocal regional air monitoring network was launched, based out of UT Dallas labs and supported by grants from NSF, Earth Day Texas, the US Army, Downwinders at Risk, the City of Plano and the US EPA. The air monitoring service, called “Shared Air DFW,” shows air quality in real time through sensors located in Joppa (South Dallas), West Dallas, Midlothian, around Paul Quinn College, and Plano.

Comparison of PM air monitoring data since 8/31 at two places: Joppa on the left and Eastfield College on the right. These kinds of inequities in pollution burdens are out there waiting to be mapped. U can do ur own comparisons at https://t.co/IzLglWL31m pic.twitter.com/F8xEGN8hKu

"Consider the citizens, their health. Also, understand when you see anything coming like this in your community, put a stop to it immediately. Because if you don't, it's gonna happen the same way that we're doing right now, constantly fighting,” Jackson said.