In June There Were A Dozen Rural Texas Counties With Zero COVID Cases. Now There Are Four.

ASPERMONT, Texas — Stonewall County Judge Ronnie Moorhead sat at his desk with a distraught look only partially covered by his face mask.

For months, Stonewall’s early measures to make social distancing the norm in his county seemed to have kept the coronavirus from reaching its mostly elderly, rural population. While the rest of Texas was seeing daily, record-setting new COVID cases, Stonewall County had remained in a cluster of west Texas counties that had zero cases.

That changed late on July 10, when Moorhead got the call from the county hospital that it had just gotten its first three cases of COVID-19.

Now, Moorhead was worried about how the community would react if he had to impose more unpopular restrictions on social gatherings or to mandate face coverings.

“Everybody is tired of this thing, including me,” he said. “But we gotta do what seems to me is just common sense stuff to protect our fellow citizens.”

His countywide shelter-in-place order in late March hadn’t been very popular. But thanks to his community’s willingness to give it their best shot, albeit begrudgingly, the early actions had “gotten people in the right frame of mind” about the seriousness of the Coronavirus pandemic sweeping across the country, he said.

“But boy, did I take heat for it,” Moorhead said, about his decision to instate a three-week shelter-in-place order in late March. Phone calls berating him for overstepping his authority poured into his office. Anger spilled out on the county’s Facebook page, which, before COVID, kept readers up-to-date on high school sports and severe weather warnings.

Riley Branch, the county attorney who worked closely with Moorhead to draft the order, said his wife’s friends were calling her to ask what it was like to be married to one of the most hated men in the county.

“It was unpleasant,” Branch said.

With just under 1,400 people, Stonewall County is one of the state’s least populated. The county seat, Aspermont, has about 900 people. Its downtown has a handful of businesses, including two restaurants, a Dairy Queen, a grocery store, and a hardware store. The county is about 936 square miles of ranch and farmland dotted with horse head oil pumps. Oil field services are a major driver of the local economy.

Hunters looking for feral hogs discovered the county about 20 years ago, promoting a boom in tourism. In late March, Stonewall’s local state of disaster order suspended hunting to reduce the amount of potential trafficking of the contagious virus.

Moorhead’s tough decision to respond to the global pandemic’s threat to his community underscores how politicized the COVID response has become, right down to Texas’ rural counties.

“I got half my county thinking it’s nonsense, and the media is overblowing it, and the other half worried about their families,” Moorhead said.

“I’m no expert on this stuff, so all I can do is listen to those who are experts on it and take their advice,” he said.

But medical experts’ advice has been contradicted by the messaging coming out of the White House, posing a challenge to Moorhead as he’s tried to convince his county to get on board with his response efforts. Stonewall County, like most of rural Texas, is heavily Republican. Trump carried the county with 79 percent of the votes in 2016. Moorhead, who has served as the county judge for 10 years, is a Democrat.

“It would be a lot easier if the directive on how to respond to this pandemic came from the medical experts and not the politicians,” Moorhead said.

On the state level, Gov. Greg Abbott has gone back and forth on the issue. Texas was one of the last states to shut down and one of the first to reopen on May 1.

Texas is now a global hotspot of COVID, reporting a record number of cases every day.

In late June, as the new case numbers began to spike, Abbott rolled back on the state’s reopening by ordering bars to close and restricting restaurants to 50 percent occupancy.

“The response from the top has been, well, let’s just say inconsistent,” Branch said.

Abbott, on July 3, issued a statewide face-covering mandate for counties with 20 or more COVID cases. For now, Stonewall County remains under the governor’s order saying no face covering are required, Moorhead said.

“I realize that there are many varying opinions about the nature of the COVID-19 pandemic,” Moorhead said in his video address, looking into the camera as he recorded on a Saturday morning from his office in the county courthouse. “What I ask is that we all be considerate of our fellow citizens and take the precautions to protect those in this community that are a part of the vulnerable population that is typically affected more by this virus.”

As of Monday, a face mask was required to enter the county administration building, where Moorhead and Riley spent the day discussing the county’s next response steps.

News of Stonewall’s COVID cases had already seeped into lunch hour at Video Express, a DVD movie rental store that became strictly a pizza restaurant a few years ago. “We’ll sell the DVDs now, but we don’t rent them anymore,” said Mitch Ward, the owner, motioning toward the room next to the counter where shelves housed stacks of former rentals. 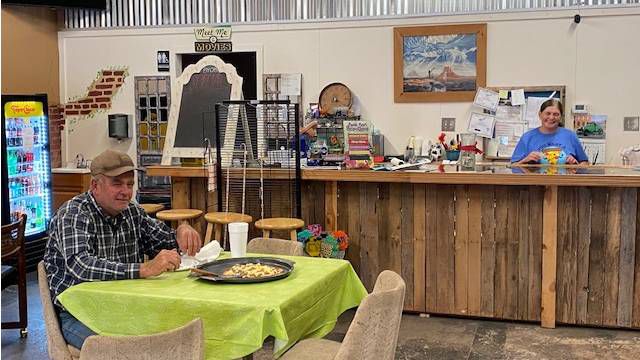 Video Express gets about as busy on a weekday lunch hour as a cafe can get in a town of 900 people. At noon, there were three customers.

The county sheriff had called to say he wouldn’t be joining his usual party that day. On Saturday, he had responded to a call that an elderly woman from another county had gotten in her car and driven off toward Stonewall County. The sheriff found her parked on one of Aspermont’s side streets. The elderly woman later tested positive for COVID, so the sheriff has put himself in quarantine for 14 days at the request of the county health authorities, a customer said.

“If we are going to have to shut down again, a lot of people are really going to go nuts,” Ward said.

Ward said she calculated that her business took about a 13 percent profit cut during Stonewall’s three-week sheltering-in-place order. A grant from the local Economic Development Council allowed her to keep paying her staff, she said.

But pizza is good takeout food, so COVID hasn’t been too bad for Video Express’ business, she said.

“It does feel like you lose your freedom a little bit, but I guess we can’t be too safe,” Ward said.