Here's What Texans Should Expect From the November Democratic Presidential Debate

NATIONWIDE — Now less than 90 days until the Iowa caucuses, Democratic presidential candidates will take the stage Wednesday for their fifth televised debate in their march for the nomination to take on President Donald Trump.

WHERE: The debate will be held at Tyler Perry Studios in Atlanta, Georgia.

WHEN: It will air on MSNBC from 9 to 11 p.m. ET and will be cohosted by The Washington Post.

Former Texas Rep. Beto O’Rourke dropped out of the race since the last debate, and fellow Texan and former Housing and Urban Development Secretary Julián Castro did not qualify, along with Colorado Sen. Michael Bennet, Montana Gov. Steve Bullock and author Marianne Williamson. Former Massachusetts Gov. Deval Patrick did not declare in time to make this debate.

What topics do you want to see discussed at the November debate?

The economy, immigration and climate change were just some of the issues the candidates talked about in last month’s Democratic primary debate. But what do you think they should talk about this time? 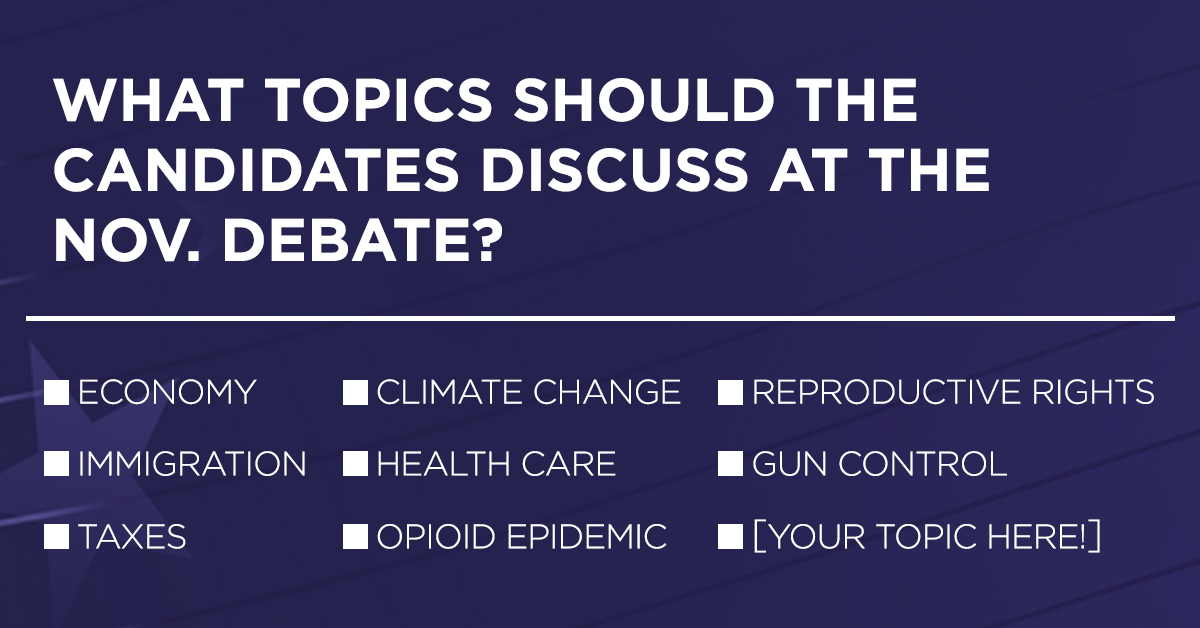 What Has Changed Since the Last Debate?

The much-hyped Elizabeth Warren-Joe Biden clash that was expected in the fourth debate mostly fell flat. But as the election grows nearer, they've each highlighted their respective faults. Biden has spent more time criticizing Warren's platform plans, particularly single-payer "Medicare for All" and a wealth tax, as well as stepping up personal attacks on her relationships with other lawmakers, calling it "just an elitist attitude, that it's either my way or the highway."

Warren has spent the past few weeks not only disagreeing with her Democratic rivals but a number of wealthy citizens who have come out strongly against her plans to tax more of the rich to pay for her programs. She has clashed with billionaire hedge fund manager Leon Cooperman and Facebook CEO Mark Zuckerberg, among others.

After recovering from a heart attack, Bernie Sanders has also received a boost in his tug-of-war with Warren over progressive voters by receiving key endorsements from most of the members of a group of freshman House Democrats seen as leaders of the progressive movement. Reps. Alexandria Ocasio-Cortez, D-N.Y.; Rashida Tlaib, D-Mich.; and Ilhan Omar, D-Minn. backed Sanders for the White House. The fourth member of what President Donald Trump has labeled "The Squad," Rep. Ayanna Pressley, D-Mass., endorsed Warren.

Continuing to hold onto the top tier is Buttigieg, who has performed well in Iowa polls lately. At one point, he said he thought the race was a two-way contest between him and Warren but later walked back those comments. He is also putting a new focus on trying to win over younger voters as well as black voters.

What hasn't changed much since the last debate is the bottom-tier candidates' struggle for attention — and time is running out. Harris, Booker, Klobuchar, Gabbard, Yang, and Steyer also qualified for the Atlanta debate and have begun taking steps to put most of their resources into campaigning in Iowa to make the most of the time left to them in the state.

Impeachment Now in the Spotlight

Since the last debate, the House of Representatives has begun impeachment inquiry hearings against Trump over the president asking Ukraine to investigate Biden's sons. With Biden — who remains a front-runner for the Democratic nomination — on the debate stage, and near-daily updates dominating national news coverage, impeachment is expected to continue being a hot topic.

Biden has been a central part of the conversation as Trump and some Republicans have attempted to pivot the impeachment inquiry to focus on the Democrat. Biden was vice president when his son, Hunter, was on the board of an energy company owned by a Ukrainian businessman. For months, Trump has called for more scrutiny of that period, alleging corrupt motives in the business and government work of the Biden family but without putting forward evidence of wrongdoing.

Biden has dismissed the suspicion, but debate moderators could further press him on the propriety of Hunter Biden's position.

All Democrats partaking in the debate support impeaching the president.

Usually around the one-year mark before a presidential election, there are candidates dropping out of the race. This time, they're dropping in.

In the past week, a sudden presidential campaign announcement came from Patrick, the former Massachusetts governor, and a reconsideration from former New York City Mayor Michael Bloomberg — both of whom thought about a run earlier this year. Patrick has filed to appear on New Hampshire’s first-in-the-nation primary ballot, and Bloomberg has filed paperwork for some Super Tuesday primaries.

Their last-minute decisions have exposed worries some have about the dynamics of the Democratic race. With Biden still leading and Warren and  Sanders on his heels, there has been some concern both among voters and party insiders about the “electability” of the leading candidates when put head-to-head with Trump. Biden's long political history and Warren and Sanders's progressive appeal are considered vulnerabilities by some.

Patrick has strong ties to Wall Street and deep-pocketed Democratic donors. Bloomberg is among the world’s wealthiest citizens. Both may be able to afford television advertising and other campaign operations relatively quickly.

Neither joined the race in time for this debate but could make an appearance in the December one in Los Angeles.

This month, candidates were required to have reached 3% in at least four qualifying national polls since September 13 or 5% in two early nominating state polls since that date, while also having collected contributions from at least 165,000 unique donors, with at least 600 each in a minimum of 20 states. Some have criticized the party's requirements for debate appearance, but Democratic Party Chairman Tom Perez has said that debate slots are not rewards for the amount a campaign raises or spends but a recognition of how much support a candidate has attracted.

What else should Texans listen for in the November debate?