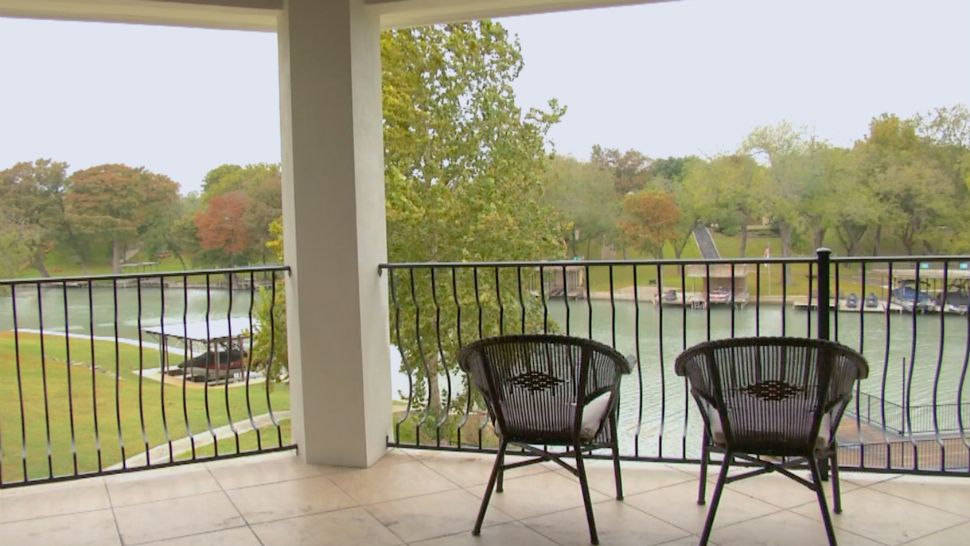 A portion of Lake McQueeney, in Guadalupe County, Texas, appears from the vantage point of a lakefront home in this image from November 12, 2019. (Stacy Rickard/Spectrum News)

The lake association, Friends of Lake McQueeney, has been working to put the request into Texas Commission on Environmental Quality for months now, but the issue of possible lake draining shifted their focus from the WCID.

“We started working on it probably back last July or August, quite honestly, but we had to press the pause button because the lake draining conversation came about, and so it was a distraction from this long-term solution that we were working towards. Our attention has recently been shifted back to it, since we did receive the temporary injunction on prohibiting the draining of the lakes,” said FOLM member Lindsey Gillum.

The WCID is a governmental entity that would create a tax to pay back bonds to repair and maintain the McQueeney Dam in the future.

Gillum said the organization is being proactive by planning for a WCID.

"Time is not on our side from what we've seen with Lake Dunlap and several years ago Lake Wood. Some property owners do not want to give time a chance for McQueeney to be the next in that chain of failures. And so we believe that a WCID is a very viable option that we can put timetables in place to meet and poise ourselves for moving forward in that solution," Gillum stated.

Preserve Lake Dunlap Association recently reached an agreement with Guadalupe Blanco River Authority to repair the dam and restore the lake, with GBRA still owning the dam. Gillum said FOLM has entered into preliminary talks with the agency, but has nothing to announce at this time. PLDA and Citizens United for Lake Placid are also moving forward in creating districts that will ultimately be put up for a vote by property owners next year.

"With the WCID in place, we can put certain restrictions in place, certain operating and maintenance standards that would have to be adhered to and we would be set up to receive financial contributions from parties that would come to the table, including property owners, to be part of the financial solution,” Gillum said.

But some property owners feel they shouldn't be asked to fund what they feel is a state problem and want to wait to fight for funding in the next legislative session.

"And one of the sensitive things that some folks are against obviously is more taxes, right? And so that's kind of a tough pill to swallow. But let's say those other options aren't successful, we would have this in place to be able to move forward instead of letting time go by," Gillum said. “And if God forbid, you know, the McQueeney Dam break in that process, at least we have taken some steps towards a solution."

The creation of the McQueeney WCID is also dependent on approval from the City of Seguin and Guadalupe County.