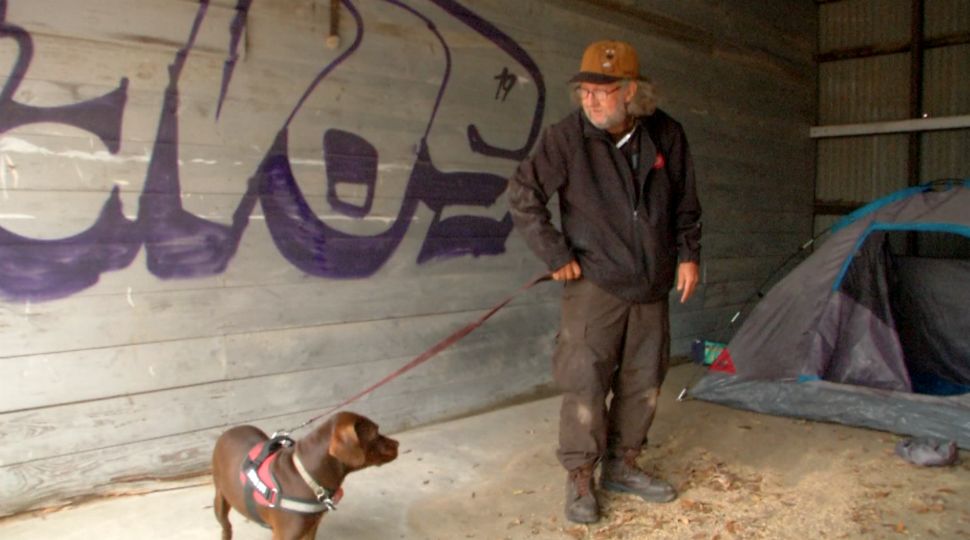 A man dealing with homelessness stands with his dog near a tent in an area dedicated to homeless Austinites November 8, 2019 (Spectrum News)

AUSTIN, Texas -- Austin City Council members are set to consider purchasing a motel with the intention of renovating and converting the structure into bridge housing for homeless Austinites, according to next week's city council addendum agenda.

Mayor Steve Adler confirmed Friday night that the proposed project is estimated to cost roughly $8,000,000, including the purchase of the building, closing costs, renovations and other related fees.

"I'm excited the council is going to be able to consider this for action," said Adler.

According to city documents, the property being considered is located at 2711 South IH-35, and is a property that would be able to provide shelter and support services to those experiencing homelessness.

Rodeway Inn, a Choice Hotels brand, currently has the same address listed on their website.

The city's Office of Real Estate Services reports that the motel is in an ideal location given the proximity to areas where individuals who are experiencing homelessness live, accessible by public transportation, close to major arterials, and within reasonable distance of health care facilities.

"That's how you move people out of homelessness," Adler said. "Ultimately, that's a capacity that we have to build up."

Adler said the motel located near the Oltorf area will be able to house more than 80 people.

While not disclosing where, Adler said the city is examining other potential sites to convert into more housing as well.

The news of more permanent housing for people living on the streets comes roughly 24 hours after Texas Governor Greg Abbott announced the setting aside of five-acres of state-owned land for an authorized temporary encampment for homeless individuals.

Robert Rhodes appeared to be one of just a few people that have taken the state up on its offer, setting up a tent inside one of the garages at the state-sponsored camp site.

"This is a lot better than where I've been," said Rhodes.

It's an improvement from seeking shelter under overpasses and sneaking in and out of buildings, according to Rhodes.

"I was shocked there was nobody else here until two other guys came in after we did," said Rhodes.

The only reason Rhodes said he was able to get to the location near US-183 and Highway 71 was because his friend had a car. Rhodes said he and his buddy missed the turn for the camp several times -- no signage is directing traffic off the busy thoroughfare onto the dirt road leading to the site.

The state did ask Capital Metro to provide transportation for people experiencing homelessness to the site located roughly four miles from downtown Austin.

According to a CapMetro spokesperson, the agency is ready and willing to assist by bussing people to the southeast Austin property, however they're still waiting for guidance from the state on how to proceed.