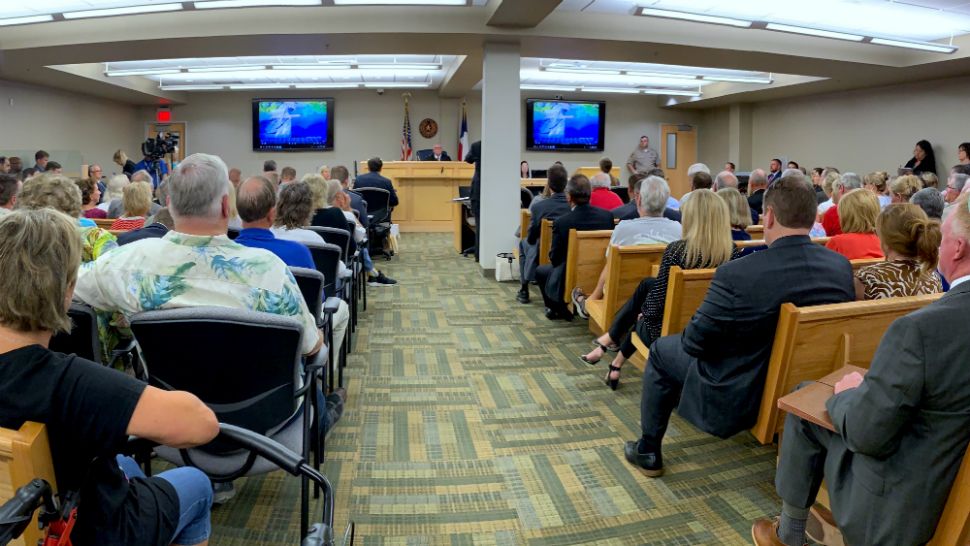 GUADALUPE COUNTY, Texas -- After nine hours of witness testimonies at the Guadalupe County Justice Center Wednesday, a judge has put a temporary hold on the scheduled draining of the four remaining lakes along the Guadalupe River.

The Guadalupe-Blanco River Authority planned to start the drawdown of Lake Gonzales on September 16, following with Meadow Lake, Lake Placid and ending with Lake McQueeney. Now that visiting judge Stephen Ables issued a temporary restraining order until he can make a final verdict, that dewatering won't begin as planned.

The hearing will resume Monday morning in Seguin. Wednesday's courtroom battle was standing room only as concerned property owners along the Guadalupe Valley Lakes flooded in to eagerly await the judge's ruling.

Two attorneys filed separate lawsuits against the GBRA that seek, in part, to stop the drain altogether. Judge Ables combined the pair, as the two attorneys were seeking similar outcomes. The GBRA announced last month that, due to public safety concerns, the only option to eliminate the risk of a dam failure would be to drawdown the four remaining lakes along its dam system.

Property owners and recreationalists have expressed harsh criticism of the GBRA, saying the agency is exaggerating the public safety risk and other options weren’t explored. Plaintiffs’ attorneys said Black and Veatch and Freese and Nichols engineering firms hired by GBRA to evaluate the dams didn’t outright say another failure was "imminent," yet GBRA has used that language repeatedly to justify the need to dewater.

GBRA’s representation said, in a recent engineering report, they were recommended to take all of the remaining dams out of operation. This was due to an inspection done of a hinge assembly from the failed spill gate on Lake Dunlap that was found to be not acceptable for continued use. Freese and Nichols said if the corroded hinge assembly is representative of hinges on the remaining dams, then the dams are not recommended to remain in service because they're all around the same age.

All of the witnesses called to the stand Wednesday came from the plaintiff’s side. Among the witnesses was James Murphy, who is a former GBRA executive. Murphy said he was terminated in June 2016 after not being named General Manager.

Murphy said the agency transferred water rights from the Guadalupe Valley Lakes to Canyon Reservoir years ago. He said that gave the GBRA more of a foothold in the water supply business, and less ability to generate power from hydroelectric dams in the system. The GBRA has said the hydroelectricity produced from the dams does not generate enough revenue to fund dam repairs.

Murphy also testified that many times, there had been talks of letting the dams fail years ago, particularly after Lake Wood collapsed. He said since GBRA was "perpetually underfunded." He wanted to know all the options that were on the table to solve the crisis of funding the dams.

"My own protégé Charlie Hickman brought up the idea that, 'Well, let's just let the dams fail. We'll take the process of creative destruction, we'll do the minimum maintenance and we'll allow them to fail.’ I laughed, it was a joke. I wasn't mad at him. We were asking for every option that's on the table. We just put it out there, right up there with aliens from Mars coming and repairing them. Then you move on to the sensible one which is finding a secure source of revenue. But those were the only two choices. Either you find a new source of revenue, or you let them go. And by default, by not pursuing a new source of revenue that's not otherwise encumbered by obligations, GBRA deliberately chose this path to do away with the lakes. Nothing will change that fact,” said Murphy.

GBRA did not call any of its witnesses to the stand before time ran out Wednesday.

The hearing will resume Monday morning at 10 at the Justice Center in Courtroom 201.