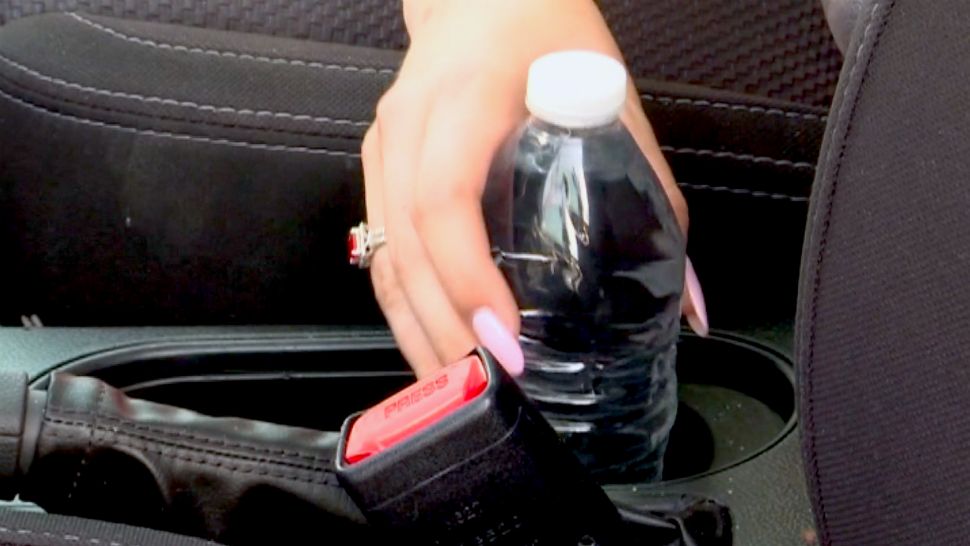 AUSTIN, Texas — Getting through this summertime heat isn't easy, especially when dealing with this long stretch of triple-digit temperatures here in Texas.

Keeping bottled water handy is a good way to stay hydrated, however, a biochemistry professor is warning against drinking from bottled water that may have been sitting in the hot sun for too long.

"We've become accustomed to carrying our water around with us, it's just that the container that we've been using to do that has some safety issues," Cheryl Watson, a UT Medical Branch Galveston professor emeritus said.

Watson advises against storing bottled water in places where it could be exposed to excessive heat. She said plastic is made up of polymers, or chemical-bonded molecules, that are broken down when heated. When the bonds are broken, the chemicals in the plastic can leach out into the water.

"Plastics are polymers. That means they're small molecules that get all linked together to make a very long chain. And that's what gives them a characteristic as plastic solids. But that's a reversible process, and guess what? Heat speeds up processes," Watson said. "You heat it all up and those individual molecules can start to break off and dissolve into the water. The more it heats up, the faster the molecules jiggle, the more they break apart, the more that leaches into the water. I mean, if you kept in the cold, there would still be some leaching out of those molecules. It's over time and the heat speeds it up."

While that bottle of water that's been sitting in your hot car may look enticing if you're parched on a triple-digit temperature day...DON'T DRINK IT! That's the advice I got from a @utmbhealth professor who says in high temps, chemicals can leach from the plastic into the water. pic.twitter.com/MMYk0gjs6g

So what's leaching out? Numerous studies have indicated chemicals released into the water can include carcinogens like antimony or toxic compounds like BPA that could be endocrine disruptors.

A 2008 Arizona State University study conducted on bottled water made from polyethylene terephthalate (PET) plastic​s found that even though small amounts of antimony may be released into the water in hot temperatures, researchers still advise "the use of alternative types of plastics that do not leach antimony...especially for climates where exposure to extreme conditions can promote antimony release from PET plastics.”

A 2016 study in Mexico found "The parameters studied (pH, temperature, and storage time) significantly affected the release of [antimony], with temperature having the highest positive significant effect." The study also found that different bottled water brands that use different PET plastic vary in the amount of antimony that's leached when under excessive heat. "Thus, the appropriate selection of the polymer used for the production of PET bottles seems to ensure low [antimony] levels in water samples."

"Science is like that, it's a messy process. People will do research for years and get different results and then you have to wait until it all dissolves down to the essence of it," Watson said. "The research I did was to test the chemicals that were from plastics in cells, specifically their hormone signaling systems. I found them to be both imperfect and very potent in my cell signaling systems that I was testing them in. How do things impersonate hormones? I wanted to get down to the nitty gritty."

Ultimately, even if it's just trace amounts of the chemicals that could be leaching from the plastics into your water, Watson advises it's not worth the risk.

"For reasons of your own personal health and for the health of the planet, try to avoid it where possible. Encourage the science agencies to please devote some time and money to investigating these plastic monomer that get made into polymers molecules, so that we know what we're actually looking at and we test them before putting them in a product that humanity has to deal with for 20 years before we find out that it's doing something bad," Watson said.

So what about those stacks of water outside of gas stations, or palettes being transported by a semi to the grocery store? Watson said she avoids those too.

"If I am suspicious at all, the bottle of water has been left in the heat, unless I'm just really, really desperately thirsty, I don't drink it out of plastic bottles anymore."

Watson said she made the switch to metal water bottles.

"Filtered tap water, I put it in a stainless steel bottle, and that I can leave my car, no problem. Nothing leeches out of the stainless steel," Watson said.