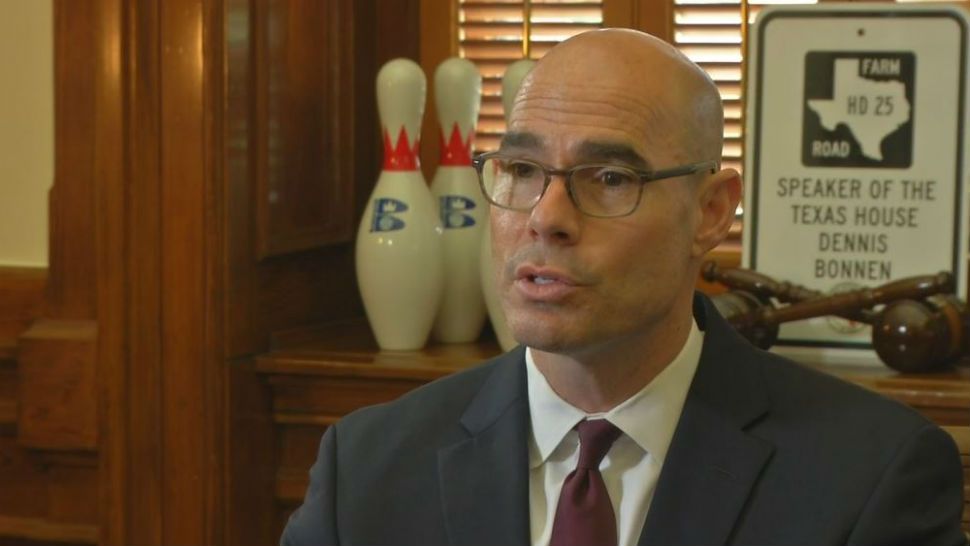 AUSTIN, Texas -- As Texas House Speaker Dennis Bonnen winds down his first session as head of the lower chamber, he’s confident he’ll get his priorities passed. But he didn’t shy away from predicting the Senate will accept the House’s stance on teacher pay.

“I don’t agree with doing a $5000 across-the-board raise,” Bonnen said. “If we just give every teacher $5000, we don’t have the ability to incentivize a teacher who might be willing to go to a more difficult campus.”

For months, teachers and librarians have set their sights on a $5000 pay bump promised by the Senate. But the House’s pay raise is about $1850 per educator and would include all school staff.

But Bonnen said he doesn’t think teachers will be disappointed with what the two chambers negotiate. He also predicted the bill won’t tie merit-pay to testing.

“We in the House do not want any more emphasis placed on high-stakes testing. We think that the testing is out of control and it needs to be slowed or stopped,” Bonnen said.

“I think what they’re going to see is a reduction in their property taxes but it’s not going to be overwhelming, unfortunately, because the money isn’t just available to accomplish that,” he said.

Bonnen also discussed two medical marijuana expansion bills that have passed the Texas House and said he thinks the Senate will get on board.

The House bills would expand the list of patients who can access the medicine under the state’s Compassionate Use Act.

When asked about the Senate’s revival of the so-called ‘save Chick-fil-A’ bill, Bonnen said he supports the bill and predicts it will pass his chamber during round two.

“I think it would pass the House.”

The House avoided debate on the measure last week after the LGBTQ Caucus brought the bill down on a technicality.

But Wednesday, the Texas Senate passed its version of the legislation setting up another chance for the House to debate it.

The bill has been touted by conservatives as an effort to protect religious freedom. As amended, the legislation would prohibit the government from penalizing someone for their membership in or support of religious groups.

Supporters say the bill will help avoid situations faced by Chick-fil-A, which was boycotted and booted from San Antonio's airport for making donations to organizations that oppose expanded LGBTQ rights.

But LGBTQ advocates say it will allow Texans to cite their faith in order to discriminate against them.

Click the video link above to watch our full interview with Speaker Bonnen.