From Big Snow To Warm Temperatures, February Has It All

Although we finally got some persistent cold and snow during the last ten days of January, it has been a mild winter so far.

However, if you are from here or lived a few winters here, you know we can get intense cold and snow during February.


As you can see, February can bring a nice taste of spring but also some brutal cold and snow.

Notice I say 'average.' It is too often that I hear people say, "our normal high is..."

Here is a look at the top ten months of February, broken down by the warmest, coldest, wettest, driest, snowiest, and least snowy.

We can also look at each day and see what the daily February records are. Again, notice what a crazy weather month it can be.

Also, notice the years of the daily records don't necessarily correspond with the monthly records. 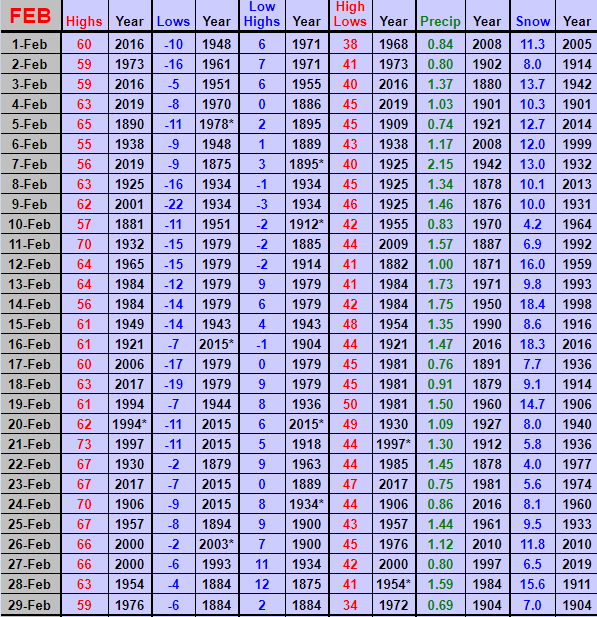 So, what can we expect this February? Predicting the weather is like trying to pick the price of a stock in the future or how many babies will be born. You can have an idea, but there is always a surprise or an outlier event.

After a couple of punches of Arctic cold at the end of January, we expect the first week of February to start cold with below-average temperatures. It will then moderate to average, possibly above average by the 7th.

Snow is always the harder part, as one storm can skew the numbers. Based on how we are roughly 50% below average for snow this season, I don't imagine a big change. With that said, during the days we transition from above to below-average temperatures, we can get significant precipitation events.

I expect February to be along the lines of what we have seen this winter, some mild to warm snowless days with occasional punches of cold.

If we can get the warmer weather developing in the south to head north and meet up with the Arctic cold, we may get one or two big snow events.

While it doesn't happen every year, based on our weather history, February and March can bring some big snow to Rochester and the Finger Lakes.

Another event you will notice is the length of the daylight hours. We pick up 1 hour, 13 minutes, and 21 seconds of daylight!