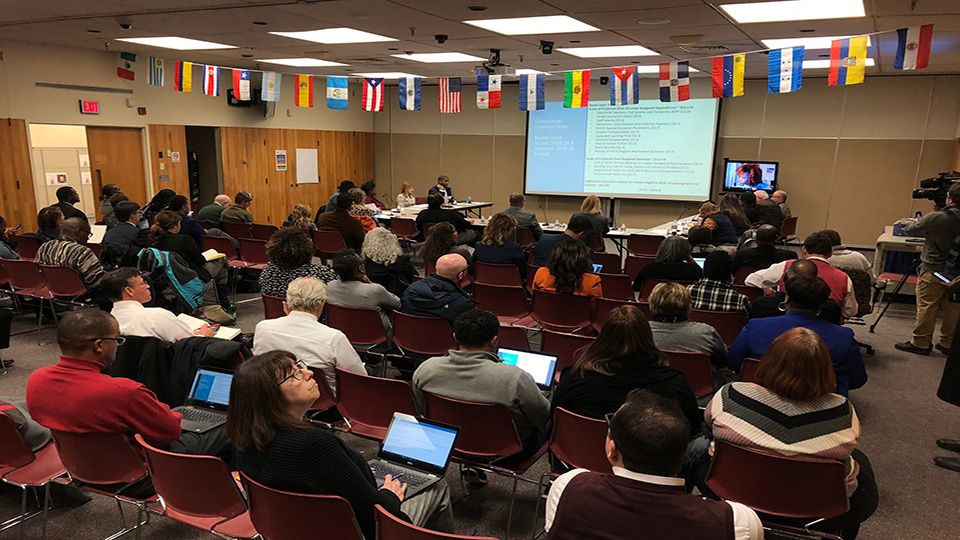 The Rochester City School District has released details of how it'll balance a $30 million budget shortfall revealed this past summer.

"I mean tough decisions were presented today, I promised the community that would provide some specifics with regards to reductions necessary to put us on financial solid ground in addition to moving forward," said Dade.

The district says it'll lobby the state for additional funding to help in the short term. It’s also planning to dip into its cash capital fund for $10 million which will require city council approval. School #2's mid-year move is also on hold.

Dade instituted a hiring freeze earlier this year, but new findings in the 2019-2020 school year budget shows the district under budgeted by $42.3 million, and over budgeted by $13.6 million which could lead to another budget deficit if not fixed.

This triggered Dade to include a 5 percent cut to staffing which is 287 postions throughout the district.

This staffing reduction is based on @TDade recommendation of 5%.
There are 5 different scenarios.

Dade says he would rather have zero reductions, “but that’s not the reality we’re living”@SPECNewsROC pic.twitter.com/LXFhswfOtA

"I do not want a groundhog day experience in this district. We're not going to start next school year with findings of under budgeting and overspending next year, so we had to make some tough decisions based on 18-19 overspending in addition to under budgeting in the 19-20 school year so that's why the change in process moving forward," said Dade.

Board of Education President Van White said Dade is doing the right thing to prevent the district from going into another budget deficit. He believes if nothing is done the $30 million in overspending from the 2018-2019 school year would turn into $60 million by May 2020.

"We've addressed the year we got behind. We're looking at our present year so that way, six months down the road we're not saying 'Oh my god. We got another 30 million we got to deal with.' So we're dealing with that now, and then as this year progresses, we're going to be discussing 2021. So for years, people have been talking about the structural deficit, that's what they're talking about. Always behind the eight ball," said White.

"We have not received the kind of answers that would reassure us that the district is cutting as far away from the classroom and from our students as possible," President of Rochester Teachers Association Adam Urbanski said. "We are very worried that this proposal really will hurt our children and student’s chances for quality learning."

The Board of Education voted in favor of a resolution approving reductions to professional development, substiture teacher cost, and staffing reductions.

There are still cuts in the $28 million dollar proposal by Terry Dade that will have to be approved by the Board of Education, City Council, and Unions.

Looking ahead, nearly $20 million from the 2020-2021 school year budget is expected to be saved from staffing reductions..

"I have every bit of confidence that we’ll just make adjustments as we move throughout this school year, we have amazing staff members who I know will continue to be dedicated to our students and will continue to do great things here in the RCSD," said Dade.

"We've worked collaboratively. I expect we'll be working collaboratively going forward as the district puts their budget together so we'll have a better sense of the numbers that come to us and we will have vetted them better at a staff level before it shows up to council," said Wagner.

The full proposal can be viewed online.