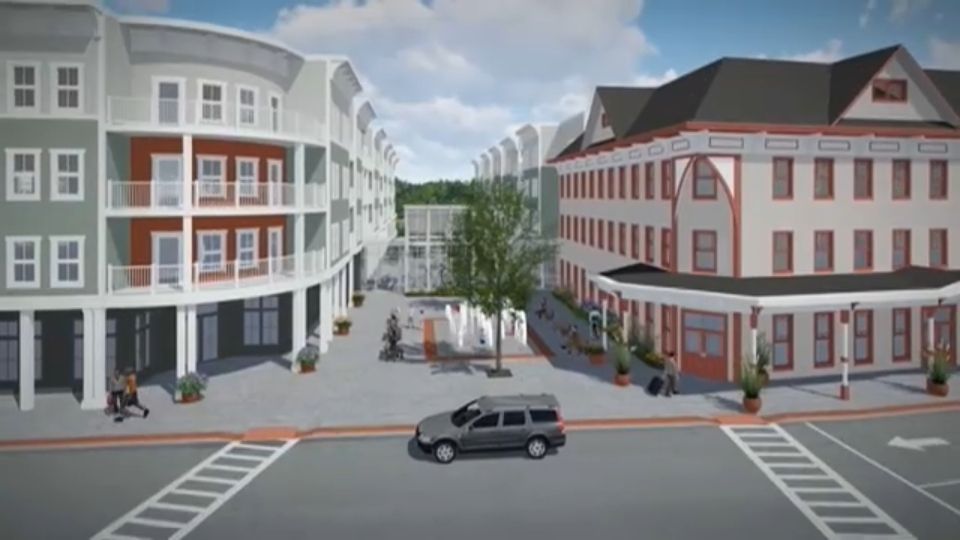 Potential Kingstonian Project Tax Break in Hands of the School Board

With 20 percent of the district’s state aid being held back by Albany, and possible staff cuts ahead, the Kingston school board is being asked to sacrifice potential tax revenue so that a large-scale, mixed-use construction project can proceed in Uptown Kingston.

Reached by phone Thursday, school board President James Shaughnessy said the project developers’ request for a property tax break of $29 million over 25 years is “a big ask” of the board.

The school board will vote as early as October 7 on whether to approve the tax break for the Kingstonian project.

Trustees said under the agreement, the school district would be giving up close to $18 million over the next 25 years.

The project, estimated to cost $52 million, would include an apartment building, a parking garage, a boutique hotel, a promenade, and 8,000 square feet of new commercial space.

Developers of the Kingstonian, Joe Bonura, Jr. and Brad Jordan plan to build the 143 rental units atop the 420-space garage and say it will bring long-term benefits.

Bonura and Jordan said they had to request the PILOT (Payment In Lieu Of Taxes), mainly because of the parking garage.

Since 2016, Kingston city officials had been looking for a developer to provide additional parking for the uptown neighborhood, which is home to the Ulster County government building and several shops and restaurants.

In order to get the garage built without raising taxes, the city partnered with Bonura of JM Development and Jordan of Herzog Supply Co.

The developers agreed to finance the $17 million to build the garage using revenue from the high-end apartments above.

The Ulster County Industrial Development Agency gave the unusual project preliminary approval for a “deviated PILOT,” which requires additional approval from the Kingston Common Council, the school board, and the Ulster County Legislature.

The council already approved the PILOT overwhelmingly. The school board is likely to vote next. Then the legislature will make the final decision on the PILOT, Chairman David Donaldson said. And the school board’s decision will “weigh heavily” on each legislator’s vote.

In place of the $29 million in taxes, the developers have made changes to the project, totaling millions.

The developers are also offering $50,000 in scholarship money to local students and two paid internships.

“The timing is not good. We recognize that, but there’s no negative impact on the schools,” Jordan said of the PILOT. “They won’t get it (immediate, significant tax revenue) if they vote ‘no.’ They won’t get it if they vote ‘yes.’ What they will get is a lot benefits to the community and people who do pay taxes.”

School board trustees criticized the PILOT during a discussion at their last board meeting. Trustee Priscilla Lowe called the PILOT request “mind-boggling.”

“We’re entering uncharted waters,” Trustee James Michael said, referencing a potential $14 million budget shortfall for the district. “We have to look at this more carefully.”

Bonura said the deal can change.

“There may be things the board wants us to do that we can do to help enrich students’ experiences,” he said. “We’re willing to talk and find creative ways to do that. We’ve had some productive meetings. We’d like to have some more soon.”

Kingston Mayor Steve Noble said Wednesday morning he believes the school board trustees will agree to the PILOT “once they have all the facts.”

School board President James Shaughnessy would not say directly how he plans to vote, but indicated the deal needs to change in a key way when asked about the $50,000 the developers are offering toward scholarships.

“The scholarships — they benefit one or two students,” he said. “They don’t benefit the school as a whole.”