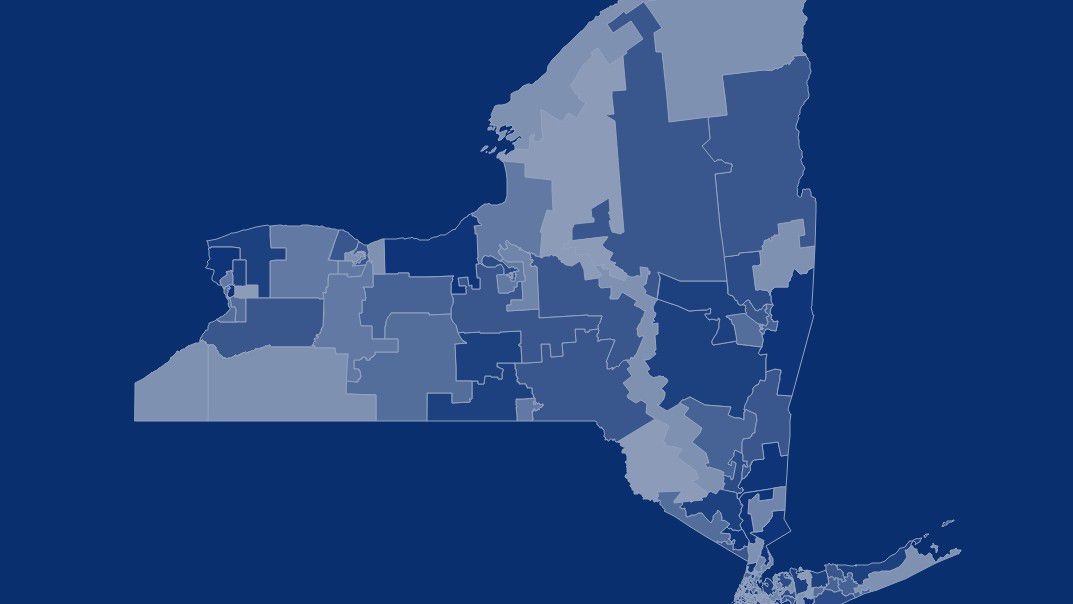 Depending on who you ask, the November election in New York could expand opportunities for same-day voter registration or open the door to voter fraud.

Depending on your perspective, the November ballot could create a new constitutional right to clean air and water or create a glut of litigation that enriches trial lawyers.

And that’s only two-fifths of the story.

There are five measures on the Nov. 2 ballot that voters will be asked to weigh in on in New York.

If that seems like a lot of ballot questions, you are right, according to Dr. Gerald Benjamin, a scholar and expert on local and state government in New York and namesake of the Benjamin Center for Public Policy Initiatives at SUNY New Paltz.

“It is unusual. I think it reflects one-party dominance of both houses. It allows an advance or reversal of long sought reforms, like ballot access and redistricting,” Benjamin told Capital Tonight.  “We are also beginning to see movement on positive rights, like clean air and water, as a sort of entrenched state level insurance policy against national level retreat.”

In the order that they will appear on the ballot, the proposals address redistricting, the environment, voter registration, absentee voting and the Judiciary.

Capital Tonight spoke with various advocates and lawmakers for and against each of the proposals to get a sense of what’s at stake. Here, we examine the first question.

This proposed constitutional amendment would freeze the number of state senators at 63, amend the process for counting the state’s population, delete certain provisions that violate the United States Constitution, repeal and amend certain requirements for the appointment of the co-executive directors of the redistricting commission and amend the manner of drawing district lines for congressional and state legislative offices.  Shall the proposed amendment be approved?

If this was a Vegas boxing match, ballot question #1 would occupy the top of the marquee.

There’s a lot at stake here. Lawmakers have crammed five interrelated issues into one opaque question.

The question is so expansive that even some of those who support the measure aren’t in love with it.

“It’s not like we’ve achieved nirvana, but it’s an improvement over what they passed in 2014,” NYPIRG’s Blair Horner told Capital Tonight, referencing the 2014 constitutional amendment that created the new Independent Redistricting Commission (IRC), which is currently creating new congressional and legislative maps for New York state.

“Unfortunately, we had hoped [lawmakers] would go all the way to [creating] an independent citizen-led commission like we have in Syracuse, but the Legislature was not willing to go there,” said Susan Lerner, of Common Cause.

Instead, even if voters approve ballot question #1, the Independent Redistricting Commission will remain part of the state’s map-making process.

That said, the IRC will undergo some changes.

Additionally, as New York Law School redistricting expert Jeff Wice recently wrote, "the proposed amendment eliminates the 2014 constitutional amendment’s differing rules for legislative approval of a redistricting plan, which now depend on whether the Assembly Speaker and Senate President Pro Tempore (Majority Leader) are members of the same political party, the only provision of the Constitution that provides such varying rules. The amendment would permit approval of the Commission’s plans with simple majority votes instead of making passage requirements dependent on party control of each legislative chamber. In the event the Commission fails to recommend plans to the Legislature, a 60% vote in each chamber would be required for approval."

Practically speaking, since there are Democratic supermajorities in both houses, this doesn’t change much of anything, but Republicans smell a rat.

“It is absurd that the Dem party wants to co-op and strip independence and strip authority away from an independent redistricting process that has never been used yet,” New York Republican Party Chairman Nick Langworthy argued. “They want to co-opt that process and they’re using our constitutional amendment process to do that, in the middle of redistricting. They ought to be ashamed of themselves for even going there. It’s brazen.”

Jack Martins, the Republican co-chair of the IRC, told Capital Tonight that the ballot measure will reduce the need to negotiate with the minority party.

“Because of these changes, one party doesn’t have to work collaboratively or reach consensus,” he said. “Yes, I do think it should be troubling to the public. We want partisanship, but tempered by the other side.”

There is also a split among good-government groups on this question.

The League of Women Voters of New York is urging voters to vote “no” on the measure, describing it as “a rollback to recent redistricting reforms that would weaken the role of the minority party in the Commission and legislative approval of the plans.”

“The problem with the current provision is its shifting standards. From a good-government point of view, we don’t believe that ratios for passage should ever be changed based on the result of an election. There should be one standard that’s clear and this amendment does that,” Common Cause’s Lerner said.

“Sixty-seven percent, 60%. For us, it’s not a dealbreaker, given that there are all these other things in the amendment that we view as good,” he said.

Indeed, the measure is stuffed with some long-standing reforms that good-government groups have pushed for years.

One example: The measure would ensure that the ten-year Census counts incarcerated individuals in their last place of residence rather than where they are currently incarcerated.

While this change is already in state law, if ballot question #1 passes, it will be memorialized in the constitution.

Since many upstate prisons are filled with inmates from more liberal downstate areas, Republicans aren’t too happy about this change.

“I never really understood the argument behind it. The fact is where people are residing is where I think they ought to be counted for the purposes of the census. It’s problematic,” said Assembly Minority Leader Will Barclay. “Ultimately, with the decline in the population of prisoners, it’s not as big of a factor as it would have been ten years ago.”

But Susan Lerner, of Common Cause, calls prison-based gerrymandering “pernicious."

Here’s how the NAACP’s Legal Defense Fund describes the issue:

"African-Americans are 12.7% of the general population, but are 41.3% of the federal and state prison population. Members of the disproportionately minority incarcerated population are largely held in areas that are both geographically and demographically far removed from their home communities: in New York, for example, approximately 77% of all prisoners are African-American or Latino, but 98% of all prisons are located in disproportionately white State Senate districts."

There is another change question #1 would make regarding the Census.

“It would clarify that all maps in the future must be drawn on the basis of the full population figures; there is some ambiguous language in our state constitution dealing with aliens and Indians that would be clarified,” Lerner said.

What Lerner is referring to is the possibility, at some point in the future, that the U.S. Census may exclude undocumented immigrants from the official population count. If that happens, there is a provision in this ballot measure allowing New York state to conduct its own count, which would include that population.

This is a vestige of the alarm that Democrats around the country felt when the Trump administration tried and failed to include a question about citizenship on last year’s Census forms.

Mirroring the national debate, Republicans are not supportive of this provision.

“We have one Census process,” Nick Langworthy told Capital Tonight. “The fact of the matter is, we have a federal standard that our redistricting should be based upon. And New York is trying to change the rules on the fly here and count things differently.”

Ballot measure #1 also caps the number of state Senate seats at 63, and sweeps out of the state constitution some unconstitutional language. 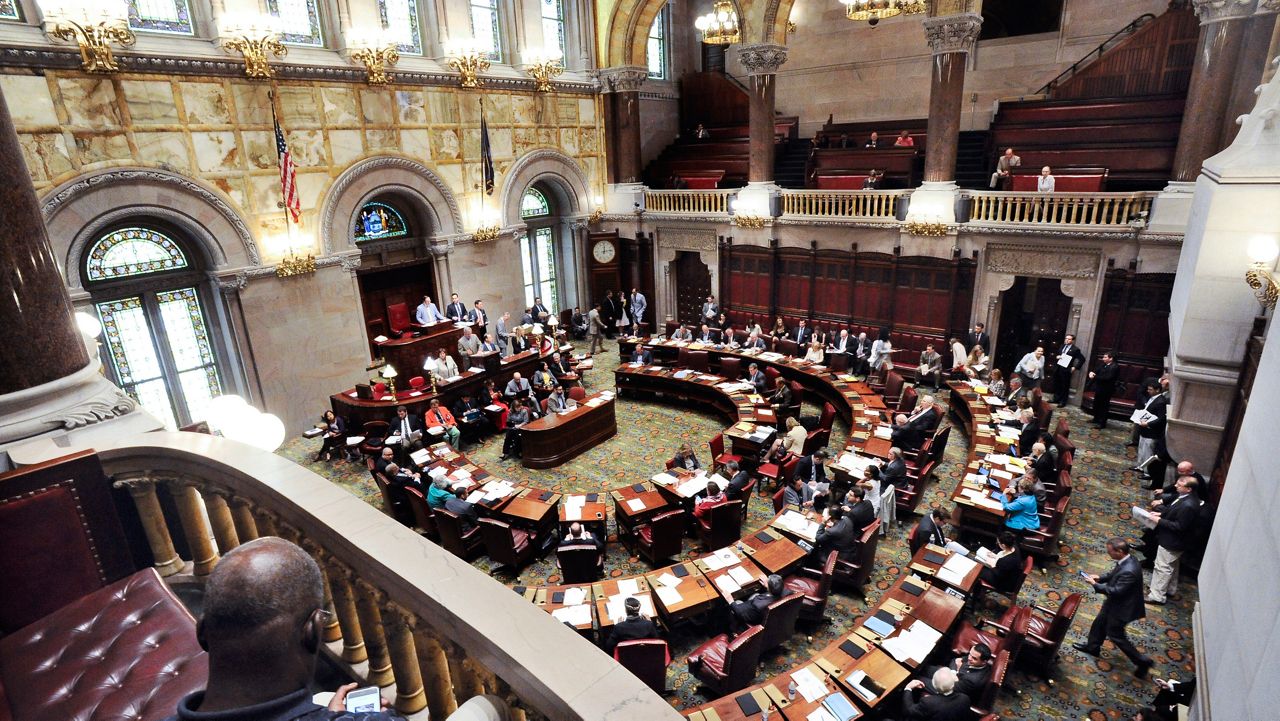 The New York state Senate would be capped at 63 seats if ballot question #1 passes. (AP Photo)

“For example, it used to be that state Senate seats were drawn based on geography instead of population,” NYPIRG’s Horner explained. “All of that got tossed out in the One Person One Vote decision in the 1960s. But the state never changed the state constitution.”

In other words, a “yes” vote would bring the state constitution in line with the U.S. Constitution.

It’s unclear why this change wasn’t made sooner.

“I can remember sitting there with the Cuomo guys and asking ‘why don’t you get rid of this?’ and they said, ‘well, we don’t have the bandwidth,'” Horner recalled. “But it’s unconstitutional."

The final provision in Ballot question #1 deals with the calendar.

A “yes” vote will amend the deadlines for when the Independent Redistricting Commission is required to submit new redistricting maps to the Legislature.

“Since we moved up our primary to June, you can’t have your maps finalized the same day that people start to circulate nominating petitions,” Susan Lerner noted. “That doesn’t work.”

There’s a domino effect at play here, sparked by the combination of the state’s new, earlier June primary and the delay in releasing the Census numbers caused by the COVID-19 pandemic.

The Legislature needs to complete action on the new maps, with the governor’s approval or with a veto override, by the end of January or the beginning of February.

The timetable currently in place allows for the IRC to submit its first plan by Jan. 15. If that plan is rejected by the Legislature, the commission has until Feb. 28 to submit a second plan, which runs right up against the beginning of the 2022 petitioning period for the spring primary.

However, if ballot question #1 passes, the IRC’s deadline is Jan. 1 for the first-draft maps.

If the IRC doesn’t present maps by Jan. 1, then the Legislature takes over the drafting of the maps immediately.

If the commission presents maps to lawmakers by Jan. 1 but the Legislature rejects those maps, then the commission has until Jan. 15 to submit a second set of maps.

Again, if ballot question #1 fails to pass, and the IRC fails to submit new maps to the Legislature by January, then the Legislature will have time in January to draw maps of its own. But that’s a big “if."

Regarding ballot question #1 in its entirety, NYPIRG’s Horner said the stakes are high because New York is one of very few states where Democrats control the redistricting process.

“Where this really matters is the congressional lines,” Horner explained. “That’s really where the historical impact will occur, however the lines are drawn in 2022, how New York draws congressional lines could have an impact on who controls the House.”