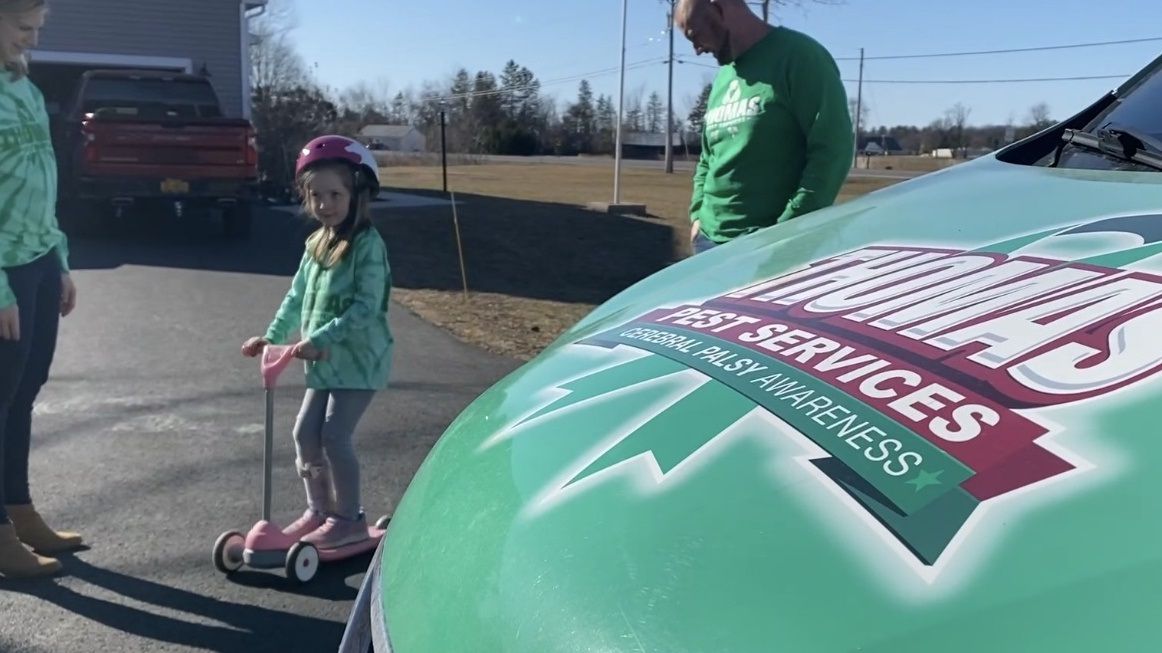 Couple Is Raising Funds for Cerebral Palsy, a Cause That Hits Close to Home

You may have seen a lot of people wearing green on Thursday. No, it’s not St. Patrick’s Day again, but rather, it’s actually Cerebral Palsy Awareness Day.

It’s an important day for Bill Clark and Sarah Thomas-Clark of Thomas Pest Services. Their entire office is decorated in green throughout March. Every employee also wears green on Fridays for this special cause.

“Customers might ask them why they’re wearing green, or especially tie-dye, which is not normal, and it’ll just spur a conversation and our efforts will reach more people,” Thomas-Clark said.

This cause means a lot to the Clarks because of their 6-year-old daughter, Riley. When she was 1 1/2 years old, Riley was diagnosed with right-sided spastic hemiplegia cerebral palsy.

“Sometimes, she has trouble putting on her socks, for example, or pants that are tight. We still have issues trying to jump with two feet,” Thomas-Clark said.

It’s been a challenge for Riley to improve her coordination and fine motor skills. Three times a week, she’ll do physically therapy, while also getting Botox quarterly, all to help with her muscles.

But Riley is a fighter and continuously working to improve her conditions, all while still being a kid and playing with her brother.

This month, the Clarks have launched a campaign to raise awareness and funds for cerebral palsy with a virtual walk.

“The more education and over time, I’m sure she’ll be a pro and learning every day, just like we are,” Thomas-Clark said.

Participants are asked to walk 3.25 miles for Cerebral Palsy Awareness Day on March 25. Photos and videos of the walk can be shared on the Walks for CP Facebook event page.

“When people reach out to us and they tell their story about their son, their daughter, their aunt, and so on, that’s when you really know you’re doing a good thing,” Thomas-Clark said.

The Clarks say it’s been rewarding to see all the support. Raising money and awareness to not only help their daughter, but also all those affected by cerebral palsy.

They’ve launched a virtual walk, asking participants to walk 3.25 for CP. Thomas Pest Services is also donating 10% of sales from this month for CP. Story tonight on @SPECNewsAlbany. #GoGreen4CP