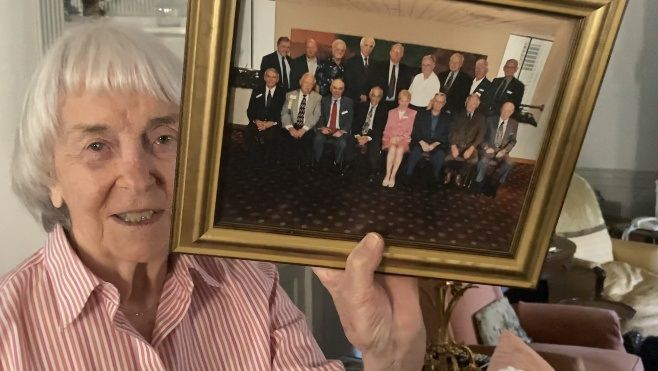 Women's History Month: Exploring the Life of an Engineering Pioneer

For much of Dr. Nancy Deloye Fitzroy’s life, if she wanted to do something, she figured it out.

“One day, daddy came home and he plunked down a turntable, speakers, a bunch of components, a wiring diagram, and a soldier, and said, 'you want a record player? Make it.' And I did,” said Fitzroy.

During World War II, Fitzroy told her parents she didn’t want to go to college, but her high school math teacher made a suggestion that would change the trajectory of her life.

“He said, ‘have you ever thought of being an engineer?’ And I said, ‘What? Can girls be engineers?’ And that’s how it happened,” said Fitzroy.

Fitzroy graduated from RPI in 1949, and she said no one wanted to hire her. Eventually, she landed a job at General Electric Research Lab as an engineering assistant. She specialized in heat transfer and fluid flow research on nuclear reactor cores and space satellites.

Fitzroy went on to participate with her late husband, Roland, in work on the Hermes Project in Malta.

“German V2 rockets, we had one, and I was calculating the trajectory of how it would fly,” said Fitzroy. She quickly became an expert in her field.

In her 37-year career, she wrote more than 100 technical papers. She holds three patents and became the go-to problem solver in the GE lab. Along the way, Fitzroy made some of her earliest childhood dreams come true.

“When I was really little, what I really wanted to do was be like Amelia Earhart. Could I ever do that? Well, it turned out, it was very easy,” she said.

Fitzroy is a licensed airplane pilot, and in around 1962, she became the first woman helicopter pilot in the Capital Region.

“People say, ’Why were you always first?’ It didn’t occur to me I was first. It was just doing what I wanted to do,” said Fitzroy.

“These are engineers, remember, no way they’re going to have a woman president. Surprise, surprise,” said Fitzroy.

Four years later, she was inducted into RPI’s Alumni Hall of Fame. Most recently, ASME awarded her with honorary membership to recognize the lasting influence she’s had on the mechanical engineering profession.

When it comes to advice for women in science, technology, engineering, and mathematics (STEM), Fitzroy’s message is clear: Don’t let anyone tell you no.

When asked what advice she has for women in STEM, Nancy says, “If you have something you want to do, just go do it. Don’t wait for somebody to tell you it’s okay.” pic.twitter.com/imBylLURxK