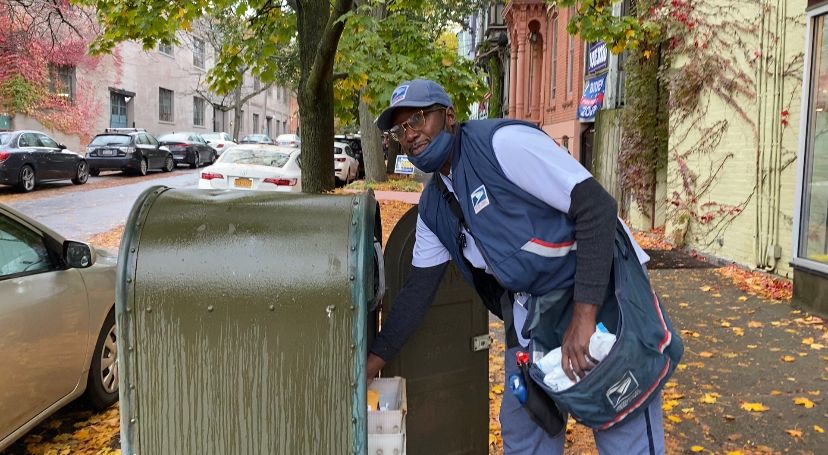 Getting to Know Your Neighborhood Postman

Khalil Dalrympel makes his rounds in Albany every week with a smile.

“You have to be a people person to be a mailman,” Dalrympel said. “I’m out here for about six hours a day."

But he’s so much more than just a letter courier. First of all, he knows the community he serves like the back of his hand.

“I memorize everything by name recognition, especially if you have a last name of a famous star,” Dalrympel said.

“My uncle said if you have a good spirit, dogs won’t bite you.”

“I take care of myself and eat a lot of salads and take a lot of vitamins.”

Most impressive, Dalrympel is a bit of an historian:

“A Black man he invented mailboxes,” he said. "Most people don’t know that.”

He’s right. It’s a little known fact that Philip B. Downing received the patent for the original street letter box in 1891, saving people a trip to the post office.

Downing’s invention unwittingly laid the blueprint for Dalrympel’s mobile office. It’s the green box shaped like a regular mailbox you see on street corners. That’s where the mail for his routes are stored and where he keeps supplies for his break.

“I have tissues in there, my thermos when it gets cold for my tea, because I don’t like coffee. I got cough drops, hand sanitizer,” Dalrympel said. “It’s like an office. It’s the best office in the world because there is nobody here to bother me.”

But his years of service, 17 to be exact, date back much further than the start of his postal career.

“I was also in the military, I’m a combat veteran and I fought in Iraq,” Dalrympel said.

He joined the military just before 9/11 and went on to fight in Operation Iraqi Freedom.

“I thank God I made it back because I lost a few friends and it still troubles me to this day,” he said.

Dalrympel, who now lives in Niskayuna, said leaving his Brooklyn home to serve his country kept him out of trouble. He credits his career success to the military and the the Postal Service’s record for hiring Black people.

“With the history of the post office and Black people, this is one of the first places to give us an opportunity when other places wouldn’t,” he said.

So the next time you see your neighborhood post man don’t hesitate to show your appreciation.