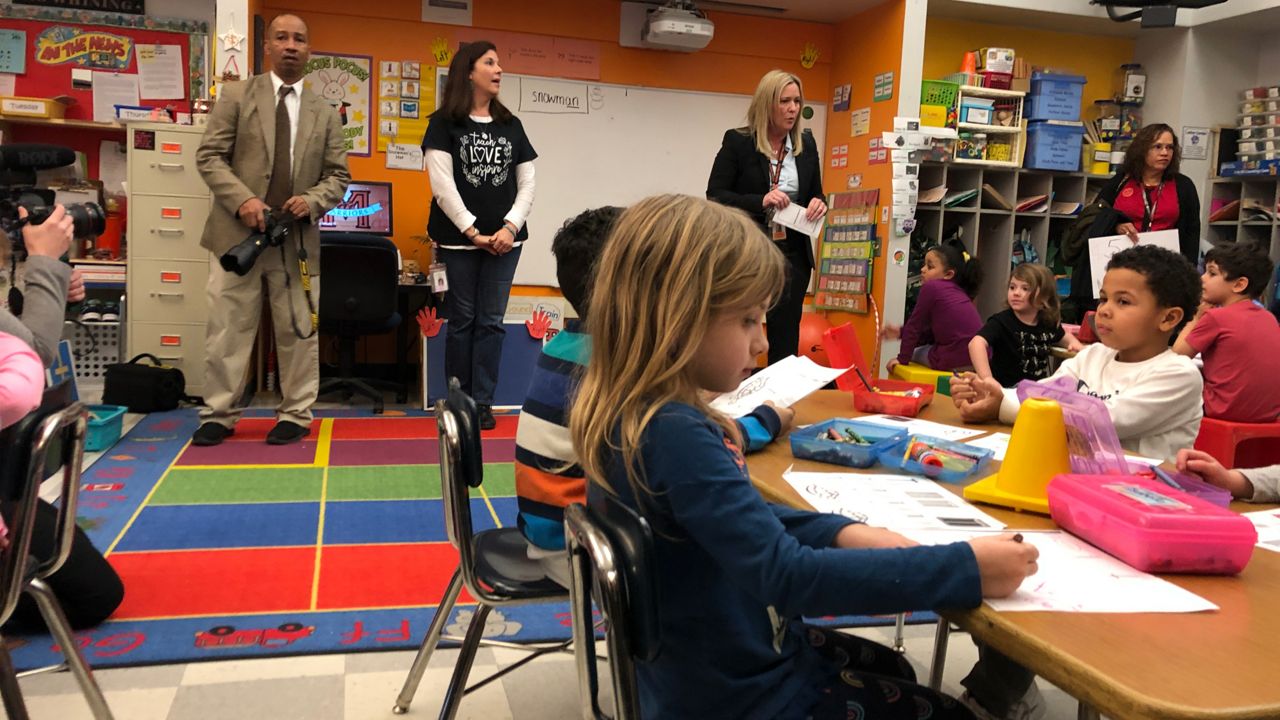 Lawmakers, Educators Call for Foundation Funding for Schools Across the State

Dozens of lawmakers crowded around the Senate steps at the Capitol on Wednesday to advocate for foundation funding for schools all across New York state, and along with NYSUT, took a tour of one district suffering at the hands of budget cuts.

"This is the year we need to fully fund Foundation Aid and make sure the priority of teaching our children gets to the top of the heap," said Sen. Shelley Mayer (D-Yonkers).

The Fund Our Schools bus has arrived at Bradt elementary school where we’re about to tour @SPECNewsAlbany pic.twitter.com/KrPa7QpKKH

Sen. James Skoufis (D-Woodbury) said for the first time ever, the Washingtonville Central School District, was able to transition from half-day kindergarten to full-day, because they never previously had the funding to do it.

"We need to stand hand in hand with NYSUT and raise hell," Skoufis said.

On Long Island, Assemblywoman Taylor Darling (D-Hempstead) has a district that spans some of the most impoverished and crime-ridden communities on the island.

"You've probably heard about my school districts," Darling said. "We are owed hundreds of millions of dollars in aid."

Sen. Jen Metzger (D-Rosendale) says her district, one of the most rural in the state, is in major trouble — not meeting the needs of its students in rural communities.

"My district is owed $138 million in Foundation Aid," Metzger said.

And while about $4 million in foundation aid owed to the Mohonasen School District is much less than other districts, Superintendent Shannon Shine says the money makes a major difference from class size to staffing and more.

This is the library. The librarian here is split between here and Pine wood because of budget cuts. @SPECNewsAlbany pic.twitter.com/OxKjgILLgN

"Any special classes that you have over 30 students, we are really not providing the individualized attention we can give half of that population in a classroom," said Maria Pacheco, a Mohonasen High School Spanish teacher.

Pacheco has been teaching ninth grade Spanish at Mohonasen High for more than three decades. She says about five years ago, they had 10 full-time teachers in the foreign language department, now they have five. And she says the district has changed. With more students living in poverty, nearly half the students in the district qualify for free and reduced lunch.

"We need more teachers, more nurses, more school guidance counselors, psychologists because the needs are really great for these new demographics that we are encountering," Pacheco said.

Staffing in the district has been cut 10 percent. A librarian at Bradt splits time between there and Pinewood Elementary and students only get 40 minutes per week in the library. The principal says that's the only time kids can take out books unless their parents exchange books for them during certain designated times.

Arts programs were slashed last year — with the exception of string instruments after community uproar.

"People are saying, 'Is harm being done?' Yeah, harm has been done and what we're really worried about is we'd like to avoid doing more profound harm," Shine said.

Shine says the best way he sees this being feasible both for the school districts, as well as for lawmakers, is to phase the funding in over the next three years.

Lawmakers and NYSUT are touring schools across the state for the next six weeks to find out how districts have been affected by budget cuts.