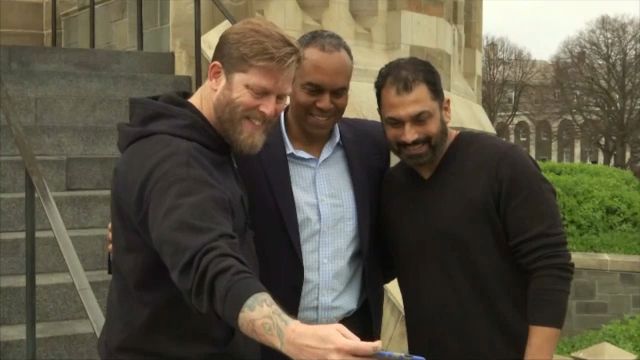 Inside a Union College building, an unlikely pair worked Monday to bridge the divide of hate.

"I want to take every obstacle to be an opportunity," said Serve to Unite Founder Pardeep Singh Kaleka.

That opportunity came in the form of tragedy in 2012. Kaleka's father was one of six people killed in a mass shooting that year. Two months later, he started to do some deep soul searching.

"I honestly needed to heal myself and understand why people do what they do," Kaleka said.

That's when he reached out to Arno Michaelis, who was the leader of one of the largest white supremacy organizations in the world and founder of the hate group that murdered his father.

"We exchanged phone numbers and then met for dinner and had a really amazing conversation," Michaelis said.

That conversation was the catalyst for a Sikh and long-time white supremacist to see eye to eye.

"When I reached out to Arno, I not only found the answers to what I was looking for, but I found a brother who said, 'You know what? I'm not only going to take accountability for what happened, but I'm going to walk with you going forward," said Kaleka.

In 1994, Michaelis decided to no longer represent hate, but to become a face of compassion. The two have since teamed up to speak out against hate, through forums, podcasts, and books.

"The more people have the courage too reach out to people who seem to be different and to have a conversation, the more people will see they have a lot more in common," Michaelis said.

The pair say an anti-hate message is more important now than ever.

"We can't say forgiveness is going to look the same as us, but we could say that this is a journey worth taking," Kaleka said.