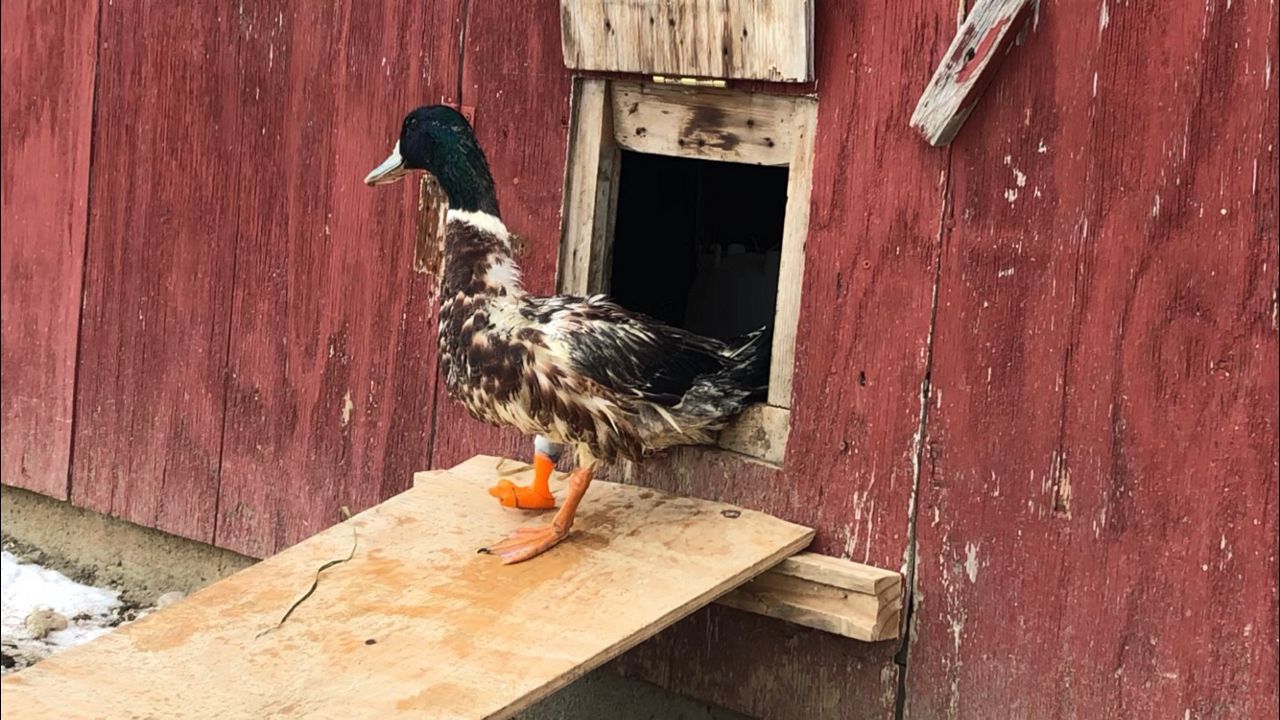 Welsh Harlequin ducks are on the endangered species watch list, and in the 1980s they were listed as critically endangered. Ron McEvilly says at one point there were less than 200 in the world.

This past fall, Ron and his wife Renee McEvilly decided they’d bring ducklings to their homestead, McEvilly's Homestead at Erin's Acres in White Creek, after a friend encouraged them to breed Welsh Harlequins to help bolster the North American population even more.

Right around Thanksgiving, Renee says she went out to the coop to find their ducklings had been attacked.

"I came down one morning to do the water and there were two ducks, one was deceased and one was attacked, so the one that was attacked that survived was Stumpy," Renee said. "So I brought him up [to the house] and we threw him [in] the tub because my first thought was we have to assess what his damages were. We saw that his leg was still kind of holding on a little bit but there wasn’t any function."

Stumpy was OK. Renee said when she found them, Stumpy was actually trying to help the other duck who was already gone.

"It was a long-tailed weasel, they're called, that was involved," Ron said. "They are common in the northeast [but] we weren’t expecting it, and it was very shocking and heartbreaking."

Renee put her skills as a nurse into action, helping rehab the surviving duck their family named “Stumpy," after his leg fell off at the joint.

Besides just healing Stumpy's leg, he's mending hearts all over the area.

"He’s quite the duck," Renee said.

The McEvillys love all their "Welshies" as they call them, but Stumpy gets a little more TLC than the others.

"Define 'spoiled,'" Renee said. "We hand feed him, he takes a nice hot bath in our bathtub, we wrap him up and we rock him to sleep."

Renee said they will often bring one of the other ducks in for special treatment so that Stumpy has a playmate. Stumpy also has a special spot in a hutch in the family's garage where he's being rehabbed.

Renee said it's been almost two months since the attack, but she's still keeping his leg clean and changing his bandage often. She said the only challenge was building trust when Stumpy first got hurt, because even though she's an LPN, treating a duck is a little different than treating a person.

"We don’t speak the same language as a person. A person you can kind of talk with, 'What hurts? What doesn’t hurt?' You really have to pay attention to his body language, how he moves, if he seems a little bit more standoffish, if he seems a little bit like he’s uncomfortable. I'll tell you it’s a little bit easier caring for a duck, and a lot more hands," Renee said. "It teaches the kids compassion. They can see how when they get hurt, there’s not much difference between him and the other ducks. It’s just he’s lacking a leg and we’re fixing it and he’s working on it."

After watching Stumpy struggle to keep up with the flock, the McEvillys brainstormed how else they could help him.

"Then it was a discussion of, 'What do we do to help Stumpy have the best life he can?,' and I called up on my great friend Morgan Hamilton who is great with 3D printing," Ron said.

The pair have been friends for more than 20 years.

"Well, first off you have to get a little backstory when somebody asks you they’re like, 'Hey we have we have a duck that lost a leg do you think you can 3D print something?" Hamilton said.

So Hamilton took a "quack" at it, creating 3D printed prototypes for Stumpy's new prosthetic leg. Hamilton co-owns a company that creates S.A.F.E. Act compliant grips, so he had never printed a leg for an animal before.

"The first couple prototypes weren’t even fit [for Stumpy's leg], we didn’t take any measurements, we just said, 'Hey, is it possible?'" Hamilton said. "They’re just geometric shapes, and then we moved to something that was a little more organic. We came over here a couple of weeks ago and tried out really the first real one."

Hamilton said he thought he'd maybe seen a 3D printed beak for an eagle, but otherwise, this was the first time he knew of anyone printing a prosthetic limb for livestock or animals.

"Prosthetics for animals isn’t something that’s normally done because most animals or livestock, they’re not endangered species," Hamilton said.

But Hamilton said it doesn't feel like they're "pioneers" of 3D printing animal prosthetics.

"We’re not really pioneering we’re just helping a duck!" Hamilton said. "I think that with the technologies that we have today, it’s not actually pioneering, it’s pretty simple stuff. With all the STEM things going on right now, children are learning how to do this stuff with some software and a 3D printer. Anybody can just make anything for any animal."

The most recent leg Hamilton printed is the leg Stumpy is still wearing today.

"We’re still working on it," Hamilton said. "There still are a lot of improvements we can make."

On Sunday, Hamilton discussed adding length to it, thinning out the material and adding holes to the prosthetic to drain water, so his stump stays drier while Stumpy's learning how to just be a duck again. But the McEvillys say Stumpy is actually teaching them.

"Stumpy brings something special to this world and he brings an example a positive example that hopefully can help someone else maybe get over or help them through a situation that’s making them feel a little less," Ron said. "Because we all have our humps and hurdles in life and sometimes maybe even a duck can help us get through it."

And that's not where this duck's tale ends. Stumpy is getting a book. The McEvillys said they're working with Renee's uncle, who is a well-known illustrator, to help create a children's book about Stumpy's perserverance and his travels, which they expect to release later this year.

Renee also takes Stumpy all over the area to different schools to meet kids and teach them that it's OK to be different and overcome challenges. And also to teach them about STEM education and let them know that creating a leg for a duck is just the beginning of what technology can do.

A recent viral video of Stumpy on Facebook has more than 5,200 views. The McEvillys say they welcome requests for Stumpy to visit on their Facebook page.