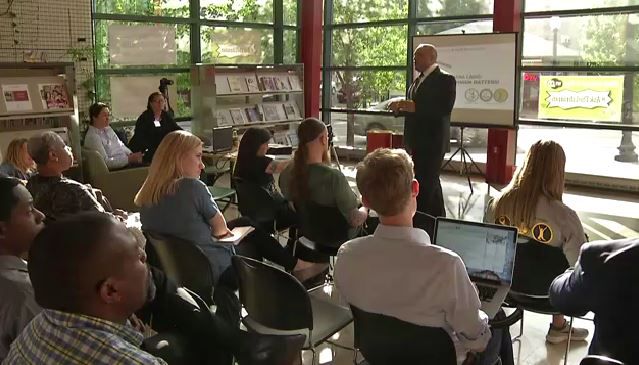 ALBANY, N.Y. -- City resident Charles Robinson says the war on marijuana has landed him and those close to him in trouble.

The 58-year-old says if lawmakers decriminalize marijuana and start to market regulate it, the money should to go back into communities like his affected by the war on pot.

"Just take a journey in my neighborhood," Robinson said. "I tell people all the time, it's like somebody dropped a bomb here."

He was one of the residents speaking out during a public meeting on the future of marijuana laws held at the Albany Public Library on Henry Johnson Boulevard. It's was the first of five meetings being held this month by Albany County District Attorney David Soares.

"This is the kind of dialogue we expected and we're looking forward to capturing a lot of what was said," Soares said.

He says these conversations will show where county residents stand when it comes to legalizing marijuana. Soares also says there are a lot of issues to consider with decriminalization.

"Taking a look back for all those folks that had been prosecuted and continue to experience the glass ceiling of advancement in their careers because of a conviction," Soares said.

These meetings come with a state health department report on marijuana legalization due out at some point this month. Sources told Spectrum News last week that the report -- commissioned by Governor Andrew Cuomo in January -- highlights the benefits of legalization, but does not outright endorse it.

"My hope is that from these grassroots meetings that we do have a grassroots movement that can go and articulate these issues to our assemblymen," Soares said.

The next meeting will be held in Berne on Monday. Other public meetings will be held in Guilderland, Delmar and Cohoes. There's also an online survey at the Albany County District Attorney's website.