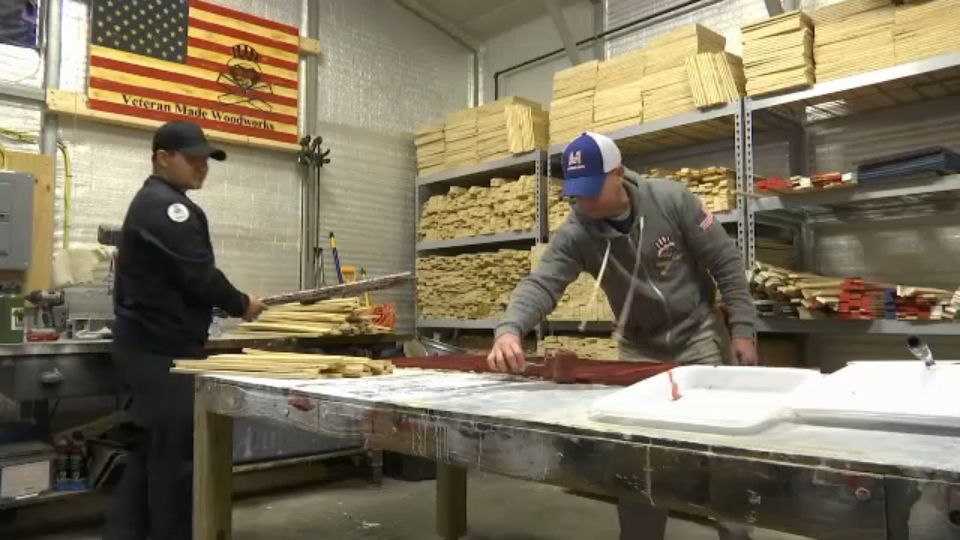 A Meaningful Purpose for Veteran Made Woodworks

Anthony Guadagnino started making handcrafted wooden American flags three years ago. It started as a gift for a friend, but quickly turned into something more.

"When I gave it to him, some of the guys there, just kind of, bells and whistles started turning and we said, 'Well, maybe we have something here,' " Guadagnino said.

Three years later, Guadagnino and his team have made more than 3,000 of these wooden flags. Orders come in from across the country, usually as a gift for someone in the military or law enforcement.

"We take it very seriously," Guadagnino said. "There’s a lot of meaning, a lot of symbolism; something that’s going to be hanging in someone’s home.”

It also means a lot for Guadagnino and his team to make these flags.  They're also veterans. Guadagnino joined the Marines in 1999 and deployed to Iraq in 2003.

"Making the flags, it means something to us, it’s important to us," Guadagnino said. "So it’s got an emotional factor.”

The emotional factor is what drives them to make sure every little detail is done right. It also brings them together to paint, wax, and engrave these flags in their free time.

Today, Guadagnino serves in the Army, working at the Watervliet Arsenal.

"It’s a team of guys that get together and you know we have a blast, some camaraderie," Guadagnino said. "That’s what the military is all about.”

With the holiday season in full swing, orders are beginning to pick up. Guadagnino expects to make more than 1,200 flags for 2018.