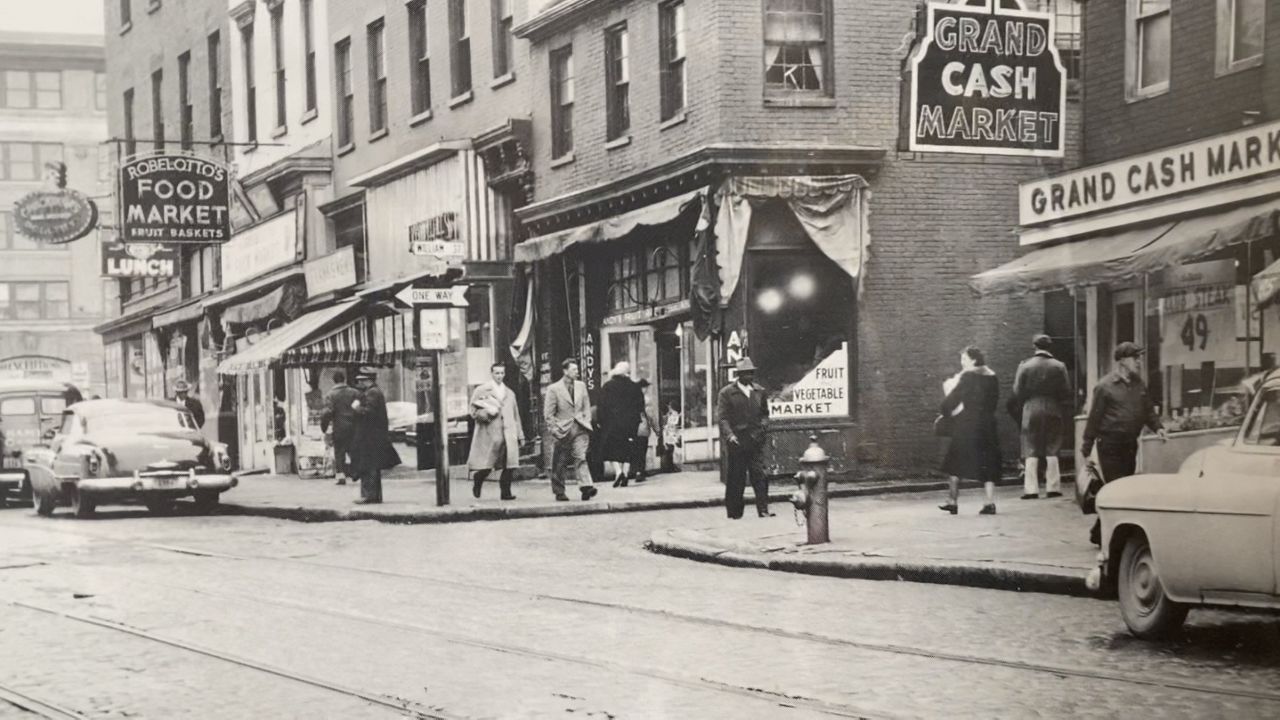 The Empire State Plaza has been part of the Albany skyline for half a century. The project took several years, cost millions of dollars and the eminent domain of one neighbor. That process got underway 60 years ago.

It’s a good thing Angelo Kontis still has many old photos throughout his home.

“This is the Eagle Theatre, which is a block and a half from where the house was,” Kontis said. “I spent many Saturdays there watching westerns.”

They’re the only thing left, other than his memory, to bring him back more than half a century to the Albany neighborhood he grew up in.

Kontis can recall all of the immigrants who settled there in the early 20th century, including his father, who came from Turkey and later opened a shoe repair shop.

“In addition, the back of the store was a small importing grocery store,” Kontis said.

His father owned the building on Hudson Avenue. His family lived upstairs. Kontis attended nearby Philip Schuyler High School where he played basketball. Life, as he says, was good there.

“Because of its diversity and because of all the vibrant going on on a day-to-day basis,” Kontis said.

Today, Kontis’s old neighborhood has been replaced by state buildings. His old home sat in between what is now The Egg and the Corning Tower.

On March 27, 1962, residents and business owners of this neighborhood were told their properties has been appropriated by the state via eminent domain for the future site of the Empire State Plaza.

“As a young person, it was upsetting to me. I do remember that because I kept thinking of all of our childhood friends, my parents’ friends," Barbara Lucas-Roberts, who grew up on Jefferson Street, said. "It was such a connected neighborhood."

Her old home is now the location of the New York State Museum. She was 12-years-old when her family was forced out of their home.

“When you think back to ‘Wow, I used to sleep over here at this museum,’ yeah it was quite strange,” Lucas-Roberts said.

“Certainly in the 40s and 50s, the South End of Albany was a wonderful, wonderful place to live and to grow up,” said Michael Mullen, another former resident.

His parents owned a cathedral shop at the corner of Madison Avenue and Eagle Street. He was 15-years-old when his parents wrote a letter to then-Mayor Erastus Corning pleading for relief from this takeover.

“For them, it was very difficult,” Mullen said. “They put their life’s savings into the business.”

In total, about 7,000 residents and business owners were forced to relocate. The state seized 98 acres of land for the plaza project.

“We realized that we could tell a different history of urban renewal, one that was a social history focused on the people affected,” said David Hochfelder, one of the founders behind the blog 98 Acres in Albany.

Documenting and sharing the stories of lives that were uprooted, the site analyzes several other urban renewal projects around the country and how they have impacted cities.

“This project took north of a billion dollars,” Hochfelder said. “Typical urban renewal projects were around tens of millions.”

He says there are many lessons to take away from the construction of the Empire State Plaza, like the permanent impact tearing something down has, as well as how this action will affect future generations.

“I often say that was a full-circle moment,” said Lucas-Roberts said, who ended up working for the state at the plaza.

He does, however, occasionally go down to the plaza for July 4 and other events. For Kontis, it’s an opportunity for him to reflect on the neighborhood that he once called home.

“Inevitably I’ll pause and look around and say this is where I try to recall what it used to be like and what it is now,” Kontis said.