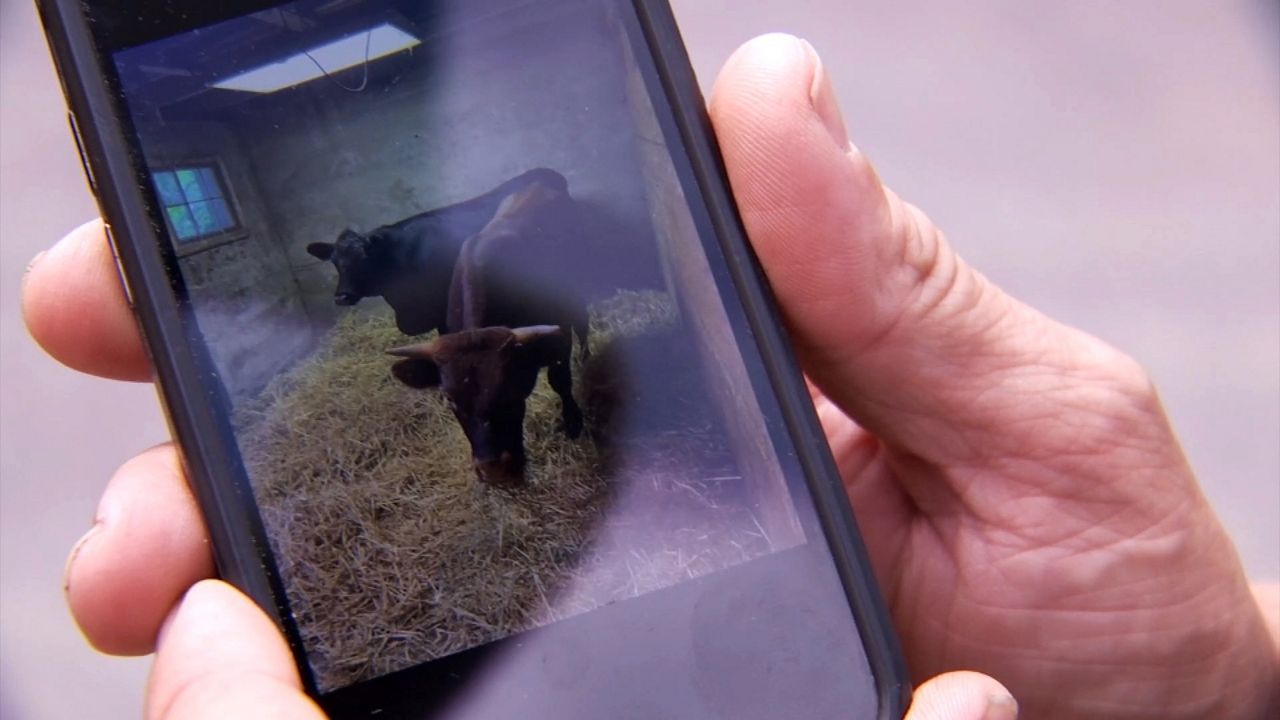 NEWFANE, N.Y. — The owner of a farm sanctuary in Newfane found herself behind bars Tuesday, after State Police say she refused to give two cows back to their owner — a beef farmer.

Tracy Murphy has since been released without bail, but there is a gag order in place — stopping her from discussing the issue any more.

But the story doesn’t end there.

“We finally got our cows back,” said Scott Gregson, the owner of McKee Farms.

The Gregson family was reunited with their two cows after over three weeks.

It was a time during which they became the focus of the community and news reports throughout the nation.

“Never in a million years would I expect this,” Gregson said. “I thought I would simply knock on the door, and get my cattle back and that would be the end of the story.”

But that’s not what happened.

It led to a dispute that put Tracy Murphy, the president of Asha’s Farm Sanctuary, behind bars Tuesday, charged with grand larceny in the third degree. That results from the theft of over $3,000 worth of goods — a felony that carries a sentence of up to seven years in prison.

Tracy Murphy was arraigned tonight. her lawyer tells us she was released without bail, but there is a gag order and plays preventing her from discussing this issue further. Full story on @SPECNews1BUF pic.twitter.com/EMUNdY4AtL

“They saw it as a threat to their way of life and everything else, but that's not what this is,” said Matthew Albert, an animal welfare lawyer representing Murphy and Asha’s Farm Sanctuary.

He says the story doesn’t end there.

“She's innocent,” he said, adding that Gregson hasn’t proven that he’s the owner, despite a judge signing off on those criminal charges.

“I had plenty of evidence showing that they were my cattle,” said Gregson. “I gave that evidence to the New York State Police.”

Even in that case, Albert says they will continue to try to get the cows back through civil routes, specifically Section 183 of the Lien Law.

“If you're pastoring or boarding any animal, as Ms. Murphy was, then you are entitled to hold on to that animal until your boarding fees are paid,” Albert said. “It’s the law.”

Gregson said typical boarding cost for cows would be anywhere from $2.50 to $5 per day.

He expects charges from Asha’s to be closer to $100 per day, which could lead to another civil matter.

“These are cows, they […] aren't guppies,” said Albert. “You're not feeding them little [pieces] of food.”

As for where the cows are now…

“I'm not telling,” Gregson replied. “We're keeping the cattle at a secure location. We're just worried about their safety and my family’s safety.”

Murphy's lawyer says he will continue to pursue every legal resource possible to get them back.

In the meantime, Gregson is just ready for this drama to be done.

“Whatever the court decides should happen to her will happen to her,” he added. “I'm also hoping to bring the message to the community […] of the struggles that farmers face in regards to activist groups.

“We're hoping that this is the closing of the story.”

Last week, Gregson told Spectrum News 1 that he would have considered selling the cows to the sanctuary, but only after he got them back.

Naturally, the relationship has only gone further downhill from there.

We asked him today if selling them to another sanctuary might still be on the table. He said he would have to think about that.

Protesters say they want the facility to be dissolved over worries the same situation could happen to somebody else.

A member of the sanctuary’s board said they plan on meeting in the near future to discuss next steps.

#breaking New York State Police confirm the two cows that were being held by @AshasSanctuary have been retrieved and the sanctuary’s owner, Tracy Murphy, was taken into custody today. Background: https://t.co/tAWtK7OMK2@SPECNews1BUF pic.twitter.com/I1YQcQToxY