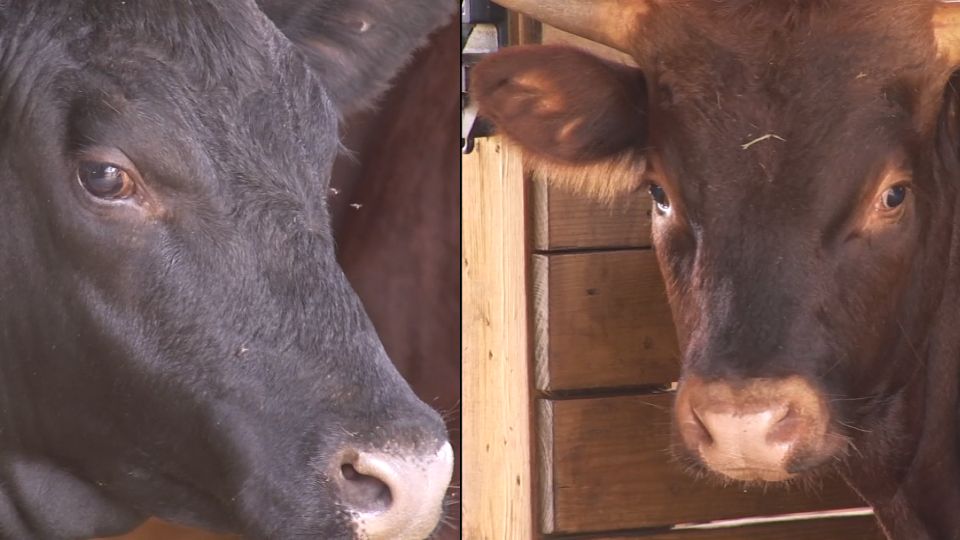 In the age-old question “where’s the beef," the answer is pitting neighbors against each other in Niagara County.

Not long after, two cows were found by an animal sanctuary down the road and that’s where they're staying.

“I see an animal that needs help and I'm gonna help them,” said Tracy Murphy, the president of Asha's Farm Sanctuary.

At Asha’s, animals set to be slaughtered are rescued.

About 50 of them live there, Murphy says, from geese and goats to roosters and cows.

“They never get to live out their whole lives. They have short lives. Very, extremely short lives," said Murphy about animals raised for food. "It's a violent, horrible death and they want to live. They’re kids. They love. They have fun.”

Two of the latest additions are Little Willow and Ishmael.

“These cows actually wandered onto the property of Asha's Farm Sanctuary," explained Murphy. "I was extremely afraid that they were going to run into the woods and they would be lost forever and get injured.”

The problem is, right down the road, Scott Gregson knows them as Blackie and Hornee, two beef cows named by his two kids. Worth noting, while his children do participate in 4-H, these are not 4-H cows.

“They enjoy going out and seeing them running out and checking on them in the morning, feeding them the best they can,” he recalled.

“I can't find any breaks in the fence line. The gates were all closed and the electric fence was on," Gregson said. "I don't know how they got out.”

Murphy called law enforcement when she found the cows.

“He said that he was going to come over that Monday, and I asked him not to do that," Murphy said. "I said, ‘please just call me and let's just see if we can work something out.’”

“She mentioned that that she would like to purchase [the cows], but I first wanted my cattle back," said Gregson. "Once I got them back, then we can make the decision.”

For now, the cows remain at Asha’s.

Murphy says no legal owner had been identified yet, just an alleged one.

When Spectrum News 1 asked what would be needed to do that, she directed us to her attorney.

We also asked if the cows had any tags. She said they didn’t.

However, two former employees at the sanctuary, speaking on the condition of anonymity, said they saw at least one cow with a tag when it got there. Days later, they said the tag was gone.

They couldn’t speak to what happened to it.

“If this guy, the alleged owner, is able to prove the legality, in that scenario, as much as you've grown to love these animals and wish that they would be able to live out their lives, would you give them back?” asked Spectrum News 1.

“So these are good questions that you have," responded Murphy. "Right now, we are exercising all of our legal rights and that would be my answer.”

Gregson also couldn’t give any more specifics either because of an ongoing investigation.

“We're in the country. Cattle do get out and that's a fact of life being a farmer," he said. "When it happens, we take care of each other.”

For now, it’s the community stationed outside the sanctuary that's speaking up for him.

They say they’ll be here 'til the cows come home.

“The people that are down there supporting me, I don't even know most of them," said Gregson. "We cannot thank them enough.”

Meanwhile, Murphy continues to care or the animals she has.

“The animals need me. They need us. They need us to feed them, to water them, to clean out their barns," she said. "I can't be distracted by all these things.”

She says she’s still willing to talk to Gregson and work things out.

His message is simple: "We just want our cattle back.”

In the meantime, both sides in this debate are feeling the impact.

Murphy says it’s impacting her sanctuary, with visitors and volunteers feeling uneasy coming in with the demonstrators outside.

Gregson has since moved all his other animals out of the county because of safety and security concerns.