The Justice Department expects to unseal charges in the coming days in connection with the 1988 bombing of a Pan Am jet that exploded over Lockerbie, Scotland, killing 270 people, including 35 Syracuse University students.

That's according to a person familiar with the case. In all, 270 people died on Dec. 21, 1988, including the 35 Syracuse University students, two SUNY Oswego students, a couple from the town of Clay, and 11 people on the ground in Lockerbie.

"Like all of the families, friends, and loved ones of the victims, we eagerly await the day when all those responsible are brought to justice, no matter how long it takes," Syracuse University Chancellor Kent Syverud said Wednesday in a statement. "As we approach the 32-year anniversary of the Pan Am terorr attack, we pause to remember and reflect on the legacy of those lives lost. It is our sacred promise that they are never forgotten."

SU normally holds its annual "Remembrance Week" for the victims in mid-October.

The bombing spurred global investigations and produced sanctions against Libya, which ultimately surrendered two suspects wanted in the attacks for prosecution in the Netherlands.

The announcement of a third prosecution would likely carry personal significance for Attorney General William Barr, who held the same job when the Justice Department revealed criminal charges nearly 30 years ago against the two Libyan intelligence officials. 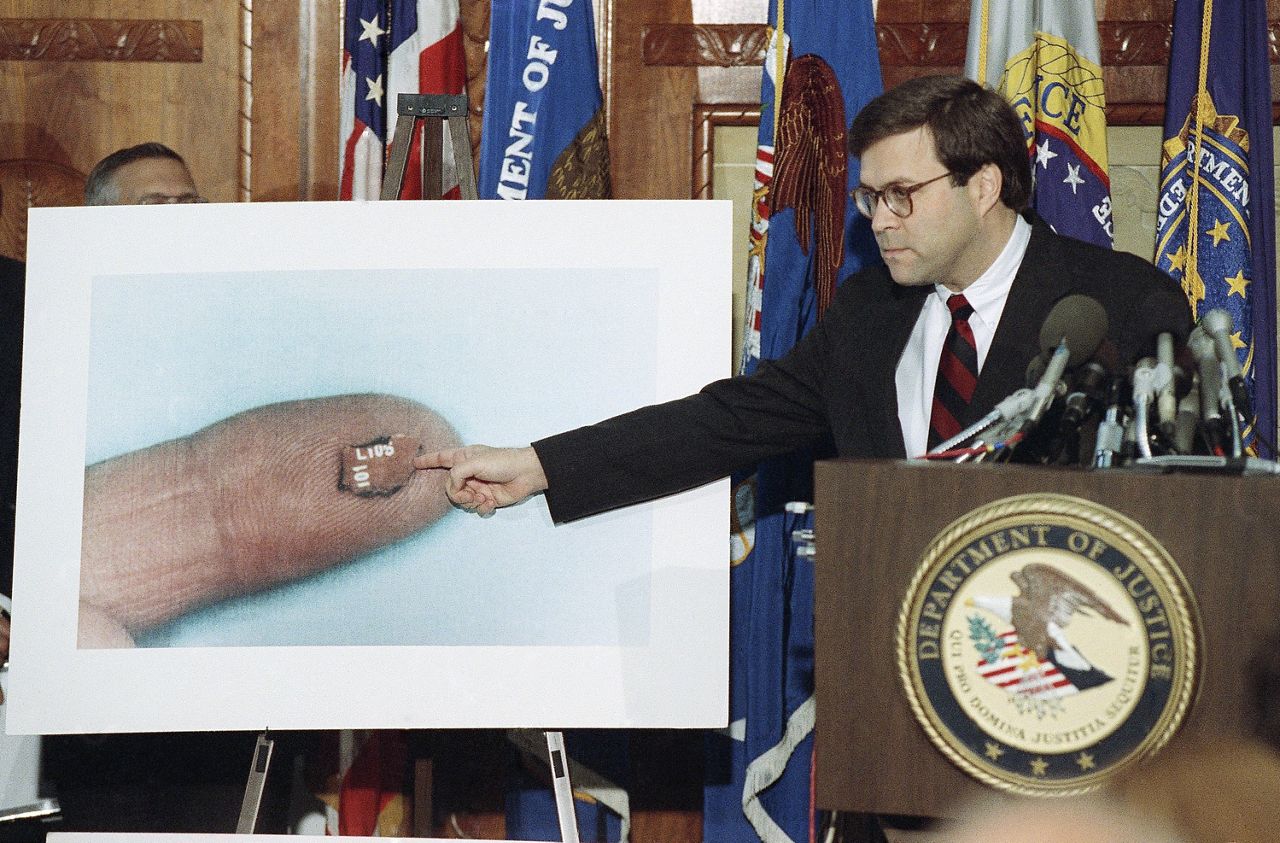 Acting U.S. Attorney General William Barr points to a fragment of a circuit board during a news conference on Pan Am Flight 103 in Washington, Thursday, Nov. 14, 1991.

“This investigation is by no means over. It continues unabated. We will not rest until all those responsible are brought to justice,” Barr said at a 1991 news conference announcing the charges. “We have no higher priority."

The head of the Justice Department's criminal division at the time was Robert Mueller, who went on to serve as FBI director and as special counsel in charge of the investigation into ties between Russia and the 2016 Trump campaign.

Libya refused to extradite the men to the U.S. but ultimately agreed to a deal to put them on trial in the Netherlands.

News of the expected criminal case was first reported by The Wall Street Journal and The New York Times. A person familiar with the Justice Department's plan who was not authorized to discuss it by name confirmed it to The Associated Press on condition of anonymity.

The New York-bound flight exploded over Lockerbie less than an hour after takeoff from London on December 21, 1988. Among the Americans on board were 35 Syracuse University students flying home for Christmas after a semester abroad.

The attack, caused by a bomb packed into a suitcase, killed 259 people on the plane and 11 on the ground.

In 1992, the U.N. Security Council imposed arms sales and air travel sanctions against Libya to prod Colonel Moammar Gadhafi, the country's leader, into surrendering the two suspects. The sanctions were later lifted after Libya agreed to a $2.7 billion compensation deal with the victims' families.

One man — former Libyan intelligence official Abdel Baset al-Megrahi — was convicted of the bombing, and a second Libyan suspect was acquitted of all charges. Al-Megrahi was given a life sentence, but Scottish authorities released him on humanitarian grounds in 2009 when he was diagnosed with prostate cancer. He later died in Tripoli.