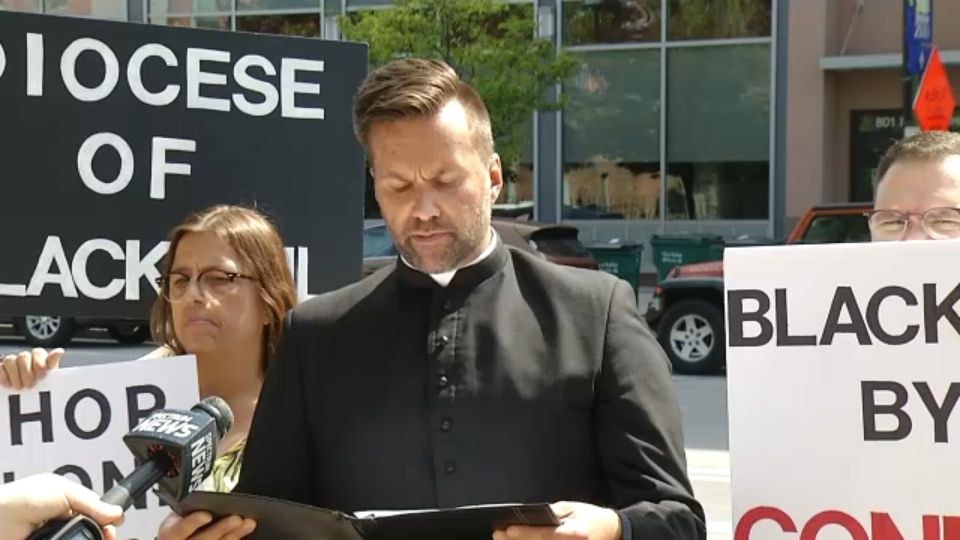 Matthew Bojanowski announced he is stepping down as academic chair of the Executive Counsel at Christ the King Seminary Tuesday morning.

He is the second person to resign from Christ the King in the last week, joining Dean of Seminarians Stephen Parisi.

Bojanowski says before coming to the seminary, he was persistently sexually harassed by Father Jeffrey Nowak.

He says it only got worse after he rejected Nowak's advances.

"I had to endure many months of revenge and retaliation by father Nowak and two other members of the clergy including slander and emotional abuse. They are my superiors. They control my future," Bojanowski said.

Bojanowski says he filed a complaint to Bishop Richard Malone last November and sent a follow-up letter in January.

He says no action was initially taken against Nowak.

Nowak was placed on administrative leave after Bojanowski's mother detailed the alleged abuse in a WKBW television interview earlier this month.

"This is exactly what was going on last year when I worked for Bishop Malone. He always wanted to just ignore and avoid problems and hope they'd go away, and wouldn't deal with them," O'Connor said.

The Diocese released a statement on Nowak being placed on leave on Sunday:

"Earlier today, while many Catholics were attending Sunday Mass, three individuals chose to gather in front of St. Stanislaus Church and Bishop Malone’s residence.  These individuals were within their rights, and displayed various poster signs.  The Diocese of Buffalo, has responded to these topics previously and it is unfortunate that some have not received or understood the responses.    It is necessary that the truth, even if not accepted by some, be shared again:

Bishop Malone has never allowed any priest with a credible allegation of abusing a minor to remain in ministry.  He has stated it is his responsibility to lead the Diocese of Buffalo and he will continue to do so by continuing to offer opportunities to bring healing to victim-survivors of abuse and renewed trust to the people of the Diocese.

In addition, there has never been an accusation that Bishop Malone violated the seal of the confessional.  Mr. Parisi and others make the outrageous and unsupported claim that Bishop Malone has not honored the seal and ignored a complaint that Fr. Jeffrey Nowak violated the seal of the confessional.  Bishop Malone has never ignored this complaint.  To the contrary, Bishop Malone has initiated an investigation of the complaint.   When the individual who made the complaint was first questioned, his response was vague and needed follow up.  Fr. Nowak has been removed from ministry while the investigation continues.  The Office of Professional Responsibility has tried to contact the individual making this complaint but he has yet to respond.  The Diocese will continue to pursue this claim and take additional action if necessary.

Finally, in reference to Mr. Parisi’s recent interview statements regarding seminarian personal finances, students accepted in the Program of Priestly Formation (PPF) for the Diocese of Buffalo sign promissory notes for 0 (zero) percent interest  loans for tuition, room and board expenses.  Upon ordination to the priesthood, these loans are forgiven.  For those without medical insurance, a policy for students is provided.  Men discerning the call to enter the PPF are informed of  these provisions.  Some candidates have chosen to delay their entry into the program so they can be adequately prepared for their time of discernment and study.  Seminarians who graduate from Christ the King Seminary graduate with a Master’s Degree and, like their counterparts in the secular world, it is not unimaginable that they will incur student debt which focusing on their studies.  The Diocese of Buffalo and Christ the King Seminary has assisted seminarians with emergency funding when possible."

Parisi, Bojanowski, and O'Connor joined together Tuesday in calling for Bishop Malone's resignation.

Bojanowski says Christ the King should also be closed.

"It is currently a fraudulent enterprise. It should be only reopened when it seeks to serve Christ rather than Bishop Malone and his lackeys," Bojanowski said.

The Diocese sent a statement late Tuesday night addressing the issues raised by Bojanowski, which can be found below.