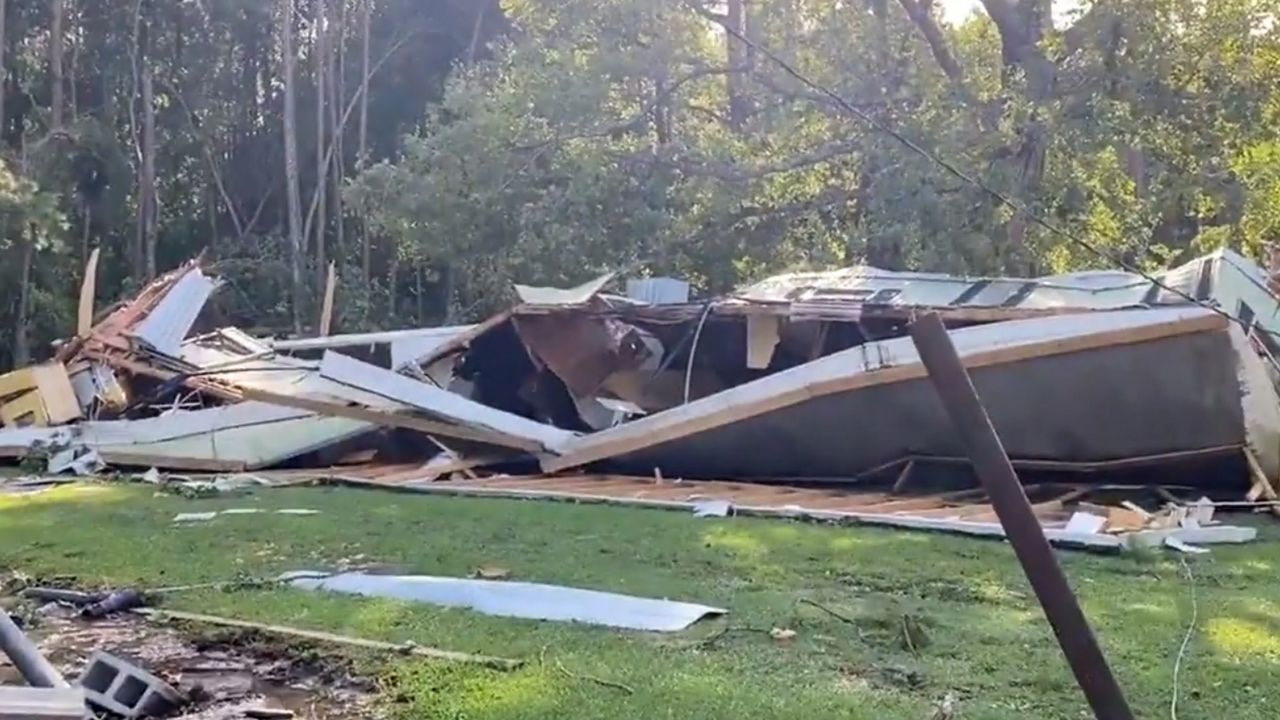 A car destroyed by a tree in Windsor, North Carolina.

5-Year-Old Girl With Autism Among Those Killed by Isaias

SOUTHPORT, N.C. — At least nine people were killed after Hurricane Isaias made landfall late Monday night south of Wilmington and spawned a deadly tornado as it cut through North Carolina.

Two people died and 14 others were injured after an EF3 tornado destroyed several mobile homes in Windsor, N.C. shortly after 1 a.m. Tuesday, according to the National Weather Service.

Several other deaths have been attributed to Hurricane Isaias.

Three people were killed Tuesday by falling trees toppled by the storm in Connecticut, Maryland, and New York City.

Another person died in Pennsylvania when their vehicle was overtaken by water and swept downstream. The Lehigh County Coroner’s Office says the 44-year-old Allentown woman was killed after encountering high waters on a street in Upper Saucon Township that swept her vehicle downstream Tuesday afternoon.

In Delaware, one person died when a tree branch fell on them, and a woman was found dead inside a New Hampshire house Tuesday evening.

On Wednesday, authorities in Philadelphia also say they found the body of a 5-year-old girl with autism who went missing during the height of the storm Tuesday. Authorities say they believe she was swept away by rising floodwaters behind her home.

Before making landfall late Monday, Isaias also claimed the lives of two people in the Caribbean and battered the Bahamas before brushing past Florida.

“It doesn’t look real. It looks like something on TV. Nothing is there,” Bertie County Sheriff John Holley told reporters. “All my officers are down there at this time. Pretty much the entire trailer park is gone.”

The storm brought heavy rains to central and eastern parts of the state.

The National Weather Service has confirmed four tornadoes so far in North Carolina. Tornadoes have also been confirmed in Virginia, Maryland, Delaware and New Jersey.

The storm raked across North Carolina coastal communities in Brunswick County, the southernmost county in the state, where Isaias made landfall. In Southport, boats were piled against each other in the marina Tuesday morning. A facade was knocked down from a building in the city’s historic downtown, leaving a pile of brick on the sidewalk. 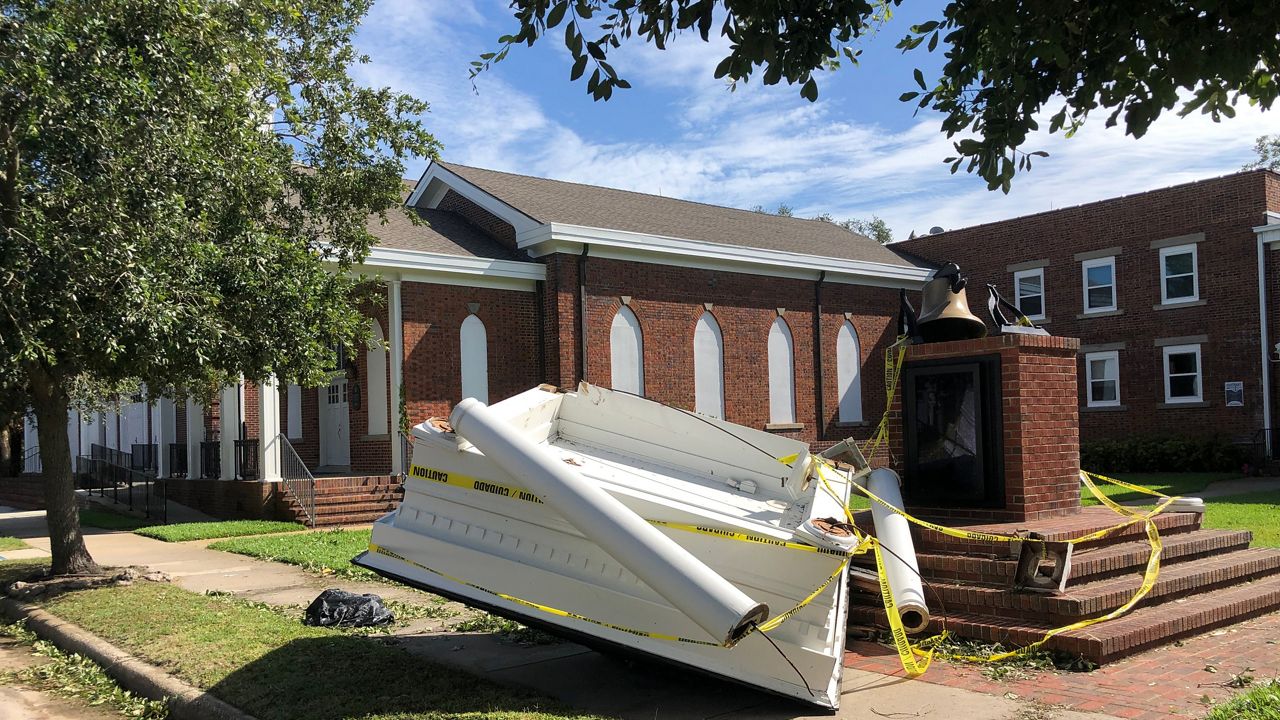 A roof covering a historic bell at the Southport Baptist Church blew off and was flipped over on the ground.

Officials in Bertie County said two people died and 20 people were taken to a hospital when a tornado touched down in a trailer park. Bertie County is a rural area along the Albemarle Sound in northeast North Carolina.

Isaias made landfall as a Category 1 hurricane at 11:10 p.m. Monday near Ocean Isle Beach, the southern tip of the North Carolina coast. The storm had maximum sustained winds of 85 mph when it came ashore, but quickly dropped to 70 mph as it moved inland. 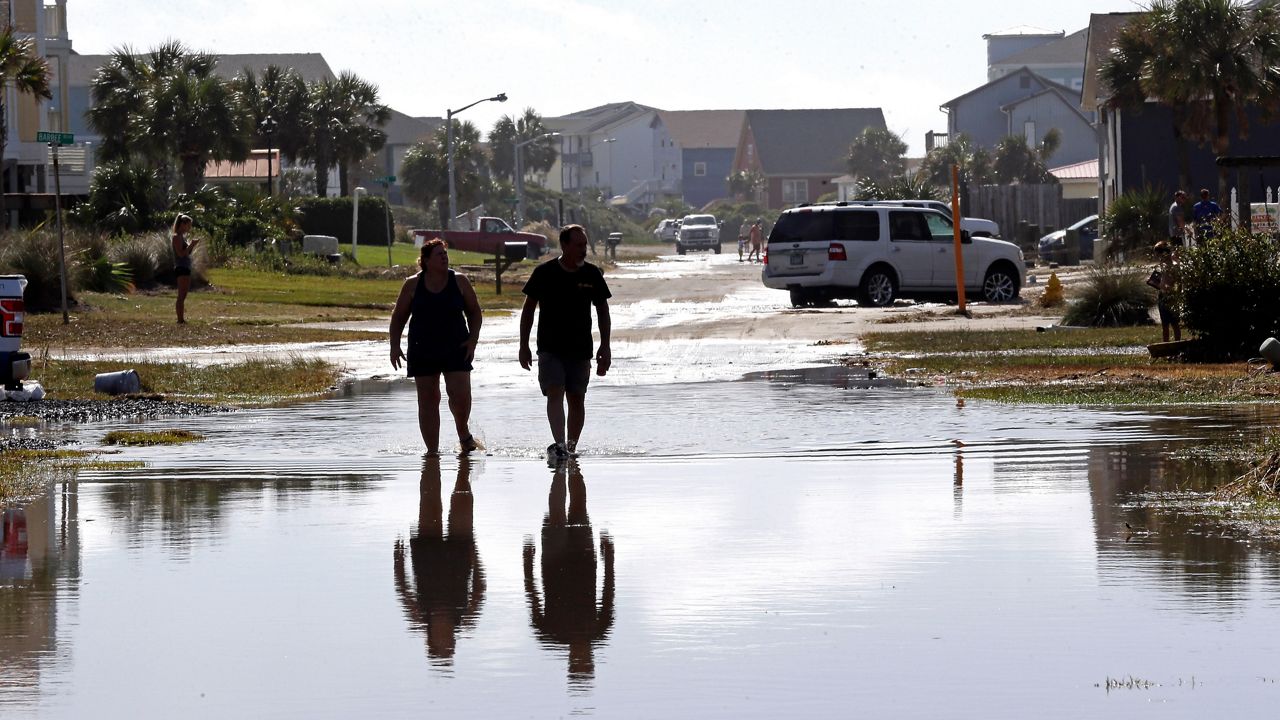 The storm dropped two to four inches of rain as it moved up along the Interstate 95 corridor, with some higher rainfall totals in local areas. More than three inches of rain fell as far inland as Wake and Durham counties.

Isaias may have been a small storm for a hurricane, but it did cause some damage along the coast. In Ocean Isle, firefighters from neighboring Horry County said they helped respond to “multiple structure fires” overnight. Photos shared by the department show a beach house engulfed in flames.

Up the beach, the Brunswick County Sheriff’s Office said they rescued four adults, five children and one Basset hound from Oak Island.

On the southern end of Brunswick County, just over the border from South Carolina, the damage was not nearly as bad.

Becky Kapland, who has owned the Sunset Beach Pier for 27 years, said she lost a couple boards off the pier. But she said other piers in the area, including Oak Island, had a lot more damage.

"This was a baby hurricane," she said. "Anytime you can come out with just a couple boards missing, you're in good shape," she said. She said she lost 75 feet off the pier from hurricane Fran in 1996 and even more from Floyd in 1999.

In Southport, the cleanup is already well underway. Crews are out picking up fallen limbs and downed trees, but the city extended its curfew until 7 p.m. Monday as it works to clean up the waterfront that took the brunt of the storm.

Royce Potter, a fifth-generation seafood purveyor and owner of Potter’s Seafood in Southport, said he rode out the storm on a boat docked near his business after he got the impression from forecasters that his area would be spared.

“They got this wrong,” he said, visibly shaken. “I’ve ridden storms out here for years.”

Across the sound from Southport, the tide came over the dunes on Oak Island, flooding streets along the barrier island.

Kevin Kirby, who was cleaning debris outside of his Oak Island home, said the ocean came up quickly into his neighbrohood with the high tide overnight. "You had the high tide, you had a full moon, and we caught the northeast side of this," he said,. He said the water came up higher than during Hurricane Florence. 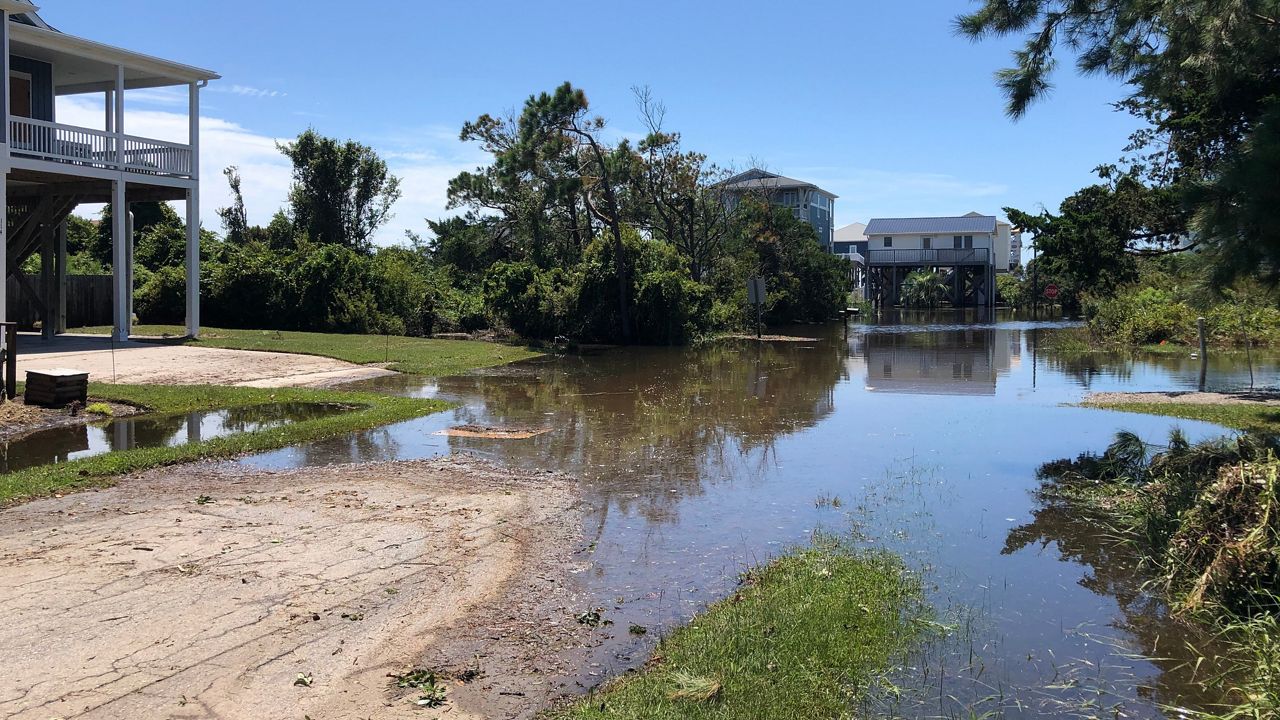 He said the neighborhood watched as a house down the street burned at about 2 a.m. Tuesday, sending burning embers flying over surrounding blocks.

The hurricane's top winds dropped to 70 miles per hour (117 km/h) by early Tuesday. But forecasters said hurricane-force gusts were likely in the Chesapeake Bay region, and tropical storm conditions were expected across New England Tuesday night.

“Potentially life-threatening urban flooding is possible in D.C., Baltimore and elsewhere along and just west of the I-95 corridor today,” the National Hurricane Center also warned.

“We don’t think there is going to be a whole lot of weakening, we still think there’s going to be very strong and gusty winds that will affect much of the mid-atlantic and the Northeast over the next day or two,” hurricane specialist Robbie Berg told The Associated Press.

At least two other tornadoes were confirmed by the national weather service, near Kilmarnock, Virginia, and Vienna, Maryland. As the heavy rains and wind felled trees, power outages spread Tuesday. More than 650,000 customers lost electricity, most of them in North Carolina and Virginia, according to PowerOutage.US, which tracks utility reports. 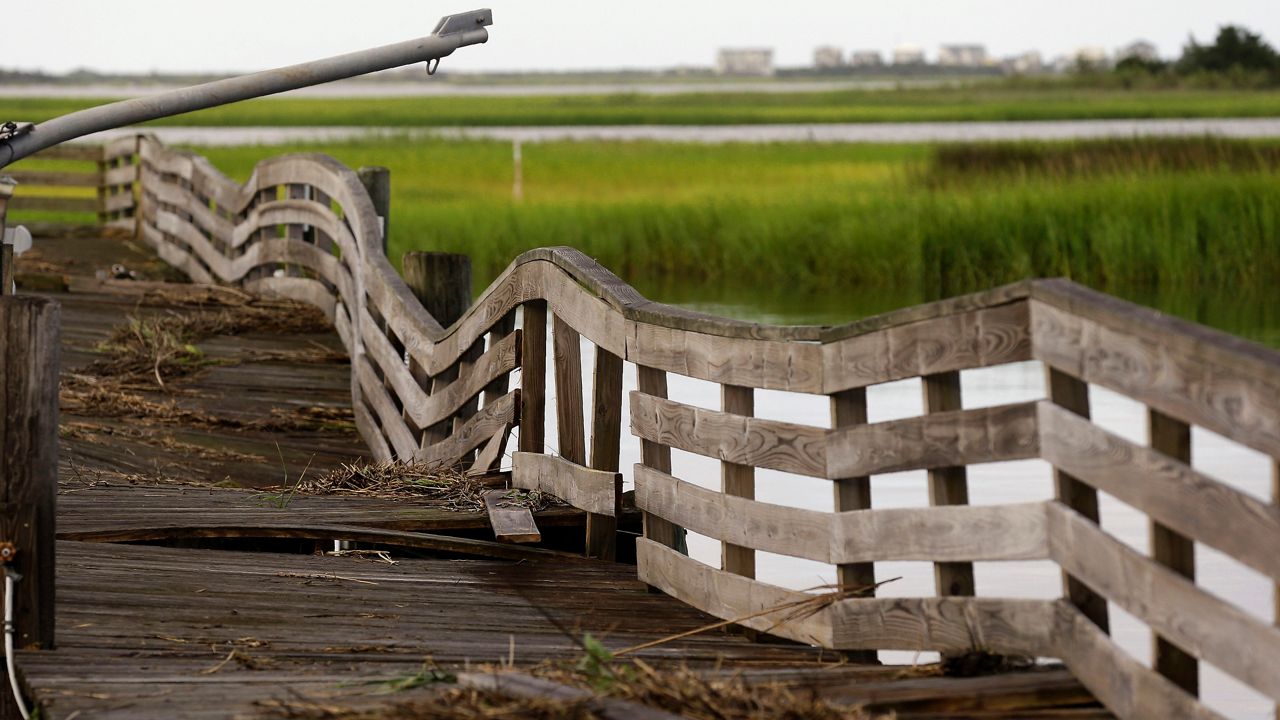 Isaias toggled between tropical storm and hurricane strength throughout its path to the U.S. coast, killing two people in the Caribbean and trashing the Bahamas before brushing past Florida.

Some coastal communities in North Carolina and Virginia woke to significant damage, mostly east and north of where the hurricane's eye struck land.

On North Carolina's Oak Island, deputies had to rescue five adults and three children after the storm hit, causing damage along the beachfront and knocking electricity and sewer facilities offline, authorities said.

Further up the coast, about 30 people were displaced by a fire at a condominium complex in Surf City, news outlets reported. It wasn't immediately clear if the fires were connected to the storm. No injuries have been reported. 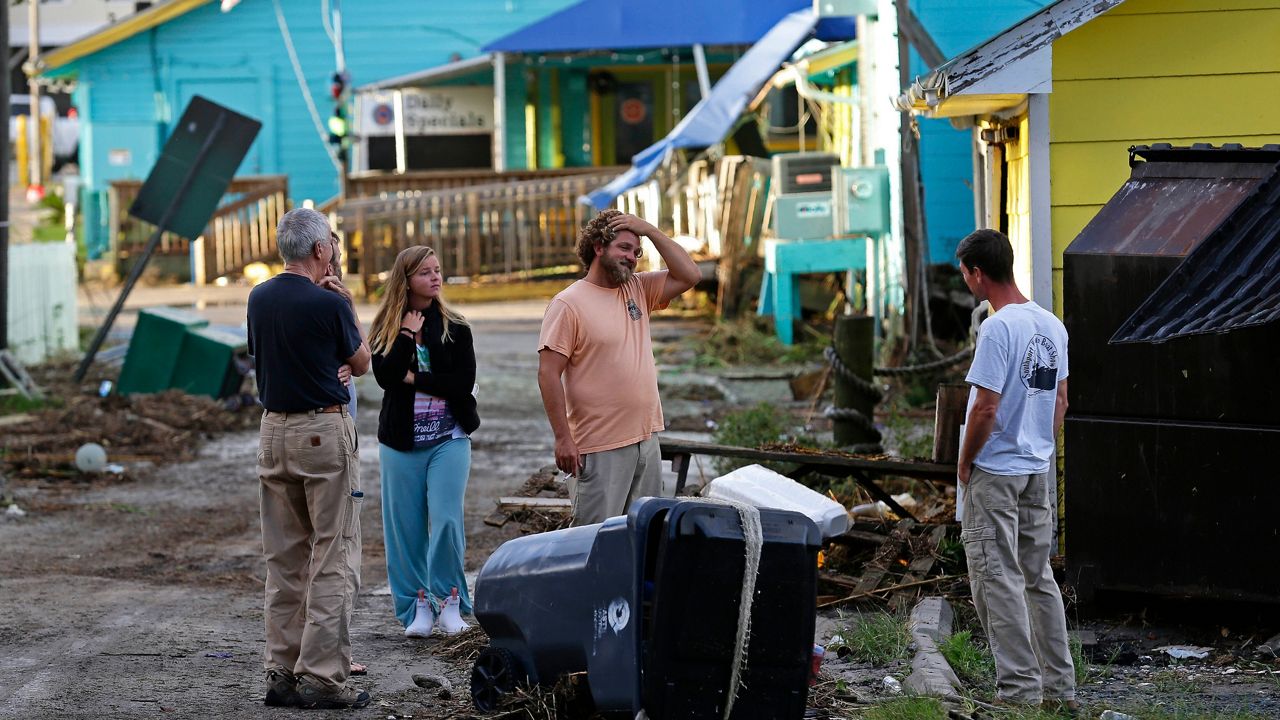 And in Suffolk, Virginia, near the coast, multiple homes were damaged by falling trees, and city officials received reports of a possible tornado. A fire station downtown sustained damage including broken window. A photo posted by city officials showed a pile of bricks lying next to a damaged business.

As the storm neared the shore, a gauge on a pier in Myrtle Beach recorded its third highest water level since it was set up in 1976. Only Hurricane Hugo in 1989 and Hurricane Matthew in 2016 pushed more salt water inland.

“All those rains could produce flash flooding across portions of the eastern Carolinas and mid-Atlantic, and even in the northeast U.S.,” said Daniel Brown, senior hurricane specialist.

The Associated Press also contributed to this story.