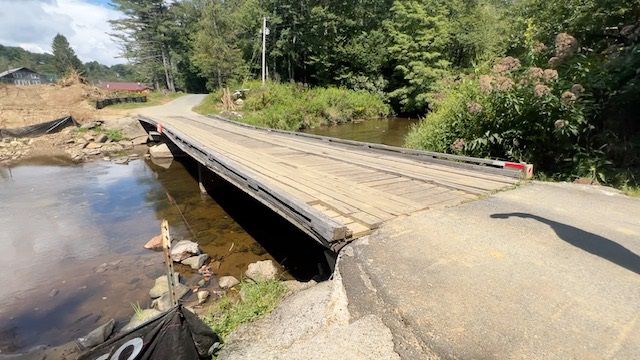 AVERY COUNTY, N.C. — Pastor Bryan Chestnut has been coming to Camp Linn Haven in Avery County since 2004, and now it's a place he calls home.

The camp has 12 weeks of programming a year for areas like youth groups, special needs, adults, art and quilting. Visitors stay in cabins, and many come back year after year.

A room at the camp is filled with paintings are made each week by visitors. One piece stands out, a painting of a bridge that will soon disappear.

"There are people that are very attached to the bridge," Chestnut said.

One year ago in August, Tropical Storm Fred brought major flooding to the mountains. Mud covered areas like their tennis courts and playground, which was cleaned up by the fire department.

The bridge was underwater. It's the only way in and out of the campground.

"What it does is it cuts the property off, so people were inside the camp and thank the Lord we didn't need any emergency help," Chestnut said.

Chestnut said the bridge may look peaceful most of the year, but it's different when it floods.

"It looked like some part of the angry ocean is coming down," Chestnut said.

Chestnut said while the bridge is currently safe to drive on, it needs to be replaced.

"Having access to emergency vehicles is critical," Chestnut said.

They are in the process of building a bridge but say they have raised only half the money they need so they are in need of donations.