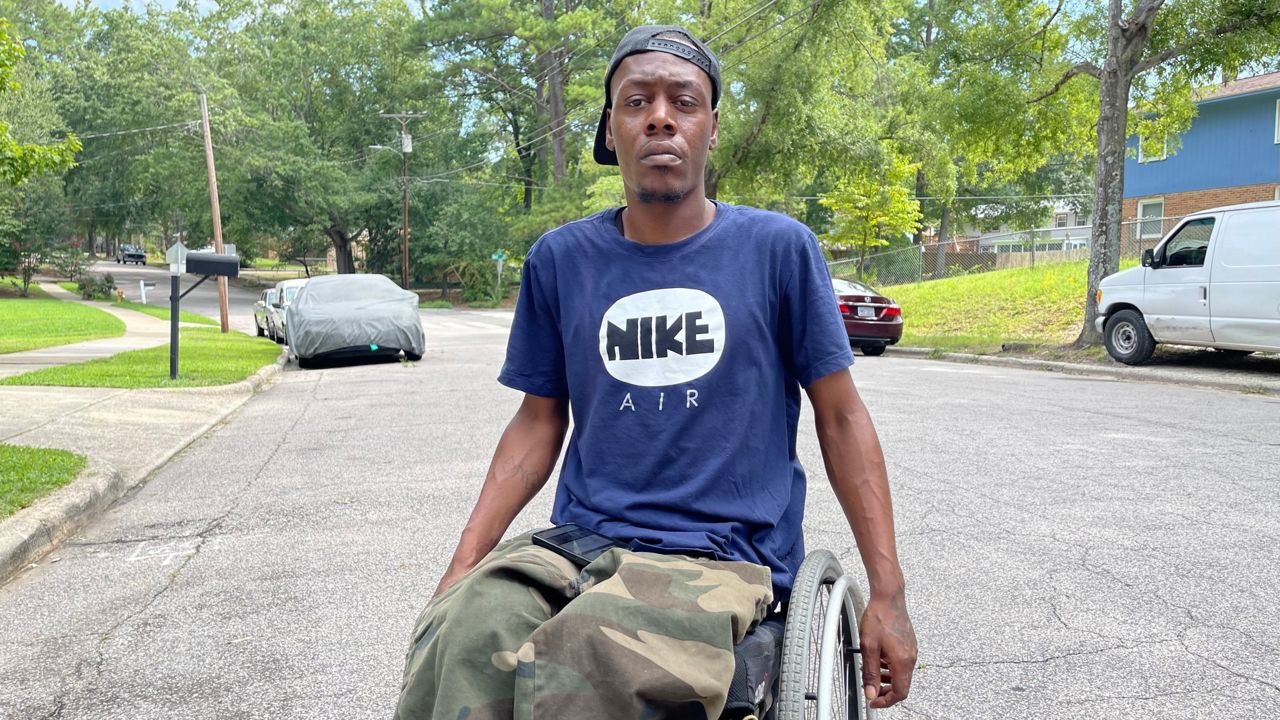 Darren Goode uses a wheelchair and stresses the importance of being self-reliant, but also the need for accommodating working conditions. (Noorulain Khawaja / Spectrum News 1)

The Americans with Disabilities Act has been in place for more than 32 years, and one North Carolina worker, who uses a wheelchair, is using his experience to help raise awareness for people with disabilities in the Tar Heel state.

He works at Amazon and has complaints about some of his working conditions. The company says they are working to accommodate him

It took Darren Goode years to adjust to his new life.

“At first, I didn’t wanna drive. Well, it’s time to get out and drive, I wanted to get a job, things like that,” said Goode, who is an Amazon worker in Garner.

He works hard to be self-reliant.

“You don’t have to call nobody, nobody gotta come pick you up. You can get in your car, go, freely, just like everybody else,” Goode said.

He's found his independence. Goode is a survivor of gun violence that left him paralyzed from the waist down after being shot in the back 13 years ago.

As a single father to his 16-year-old son, Goode has to work to support his household, but he believes he's been passed over for jobs because of his disability.

Nine months ago, he was hired by Amazon to be a packer in the Garner fulfillment center.

“I’m grateful they gave me the job, an opportunity, but it’s just how you treat people, employees with disabilities. These people on staff have to be trained, know how to deal with people, come to nobody, violate their rights, or harass them. It’s harassment, telling me I don’t meet the qualified rate, which why you didn’t put me in place where I don’t have to worry about rate?” Goode said.

The rate he is referring to is the number of packages an Amazon employee is expected to fill each week, and he says he's been written up before for underperformance.

Goode says he knows his rights under the Americans with Disabilities Act, which prohibits discrimination against people in several areas, including employment.

He claims Amazon managers are in violation of the ADA by not doing more to accommodate him. His request for a guaranteed accessible parking spot was denied, he says.

He also says he hasn't had a dedicated workstation with an adjustable desk, something that would make it easier for someone with a disability to do their job.

Goode adds that he has brought all his issues to management, and said all he's been told is that "they’re working on it.”

Spectrum News 1 reached out to Amazon to get a response to Goode's allegations.

In a statement, Amazon spokesperson Steve Kelly said in part:

“…At Mr. Goode’s request, he was provided a custom workspace to meet his specific needs. The leaders at the Garner fulfillment center continue to support Mr. Goode by fine tuning his workspace accommodations and addressing other issues where possible and in accordance with applicable law.”

Amazon goes on to say all its senior leaders at the Garner facility have been through ADA training, something they do yearly, adding the company was recognized as one of the best places to work for disability inclusion this year by the Disability Equality Index.

This index, run by Disability:IN and the American Association of People with Disabilities, is a rating tool to help give businesses a way to measure inclusion and provides a roadmap to improve.

“Some people give up when they get disability, they give up in life. No, don’t give up, keep going. That’s why I go to work each day, why I drive, be independent as possible, because I might motivate the next person," Goode said. "Yeah, we got disability, but we wanna be treated the same way, like everybody else.”

The Disability Equality Index gives companies a score from zero to 100 with those scoring over 80 recognized as one of "the best places to work for disability inclusion."

Goode says he hasn't filed an official ADA complaint yet, but is making calls to lawyers to see what is best.

Spectrum News 1 reached out to an employment lawyer to learn more about the challenges of an ADA case, especially when it comes to interpreting the law.

“There is subjectivity, and these have to be handled on a case-by-case basis, so the employer needs to go ahead and look at these accommodations and determine what’s reasonable," Michael Kornbluth, an employment attorney said. "And the employee needs to understand what is an undue burden. They have to work together. But there’s a lot of subjectivity potentially in one’s interpretation and that leads to potentially a lot of problems in litigation.”

Kornbluth says if an employee feels they're getting mistreated, the first step is to speak to management or human resources. And if that doesn't help, they should contact an agency, like the Equal Employment Opportunity Commission or an attorney.