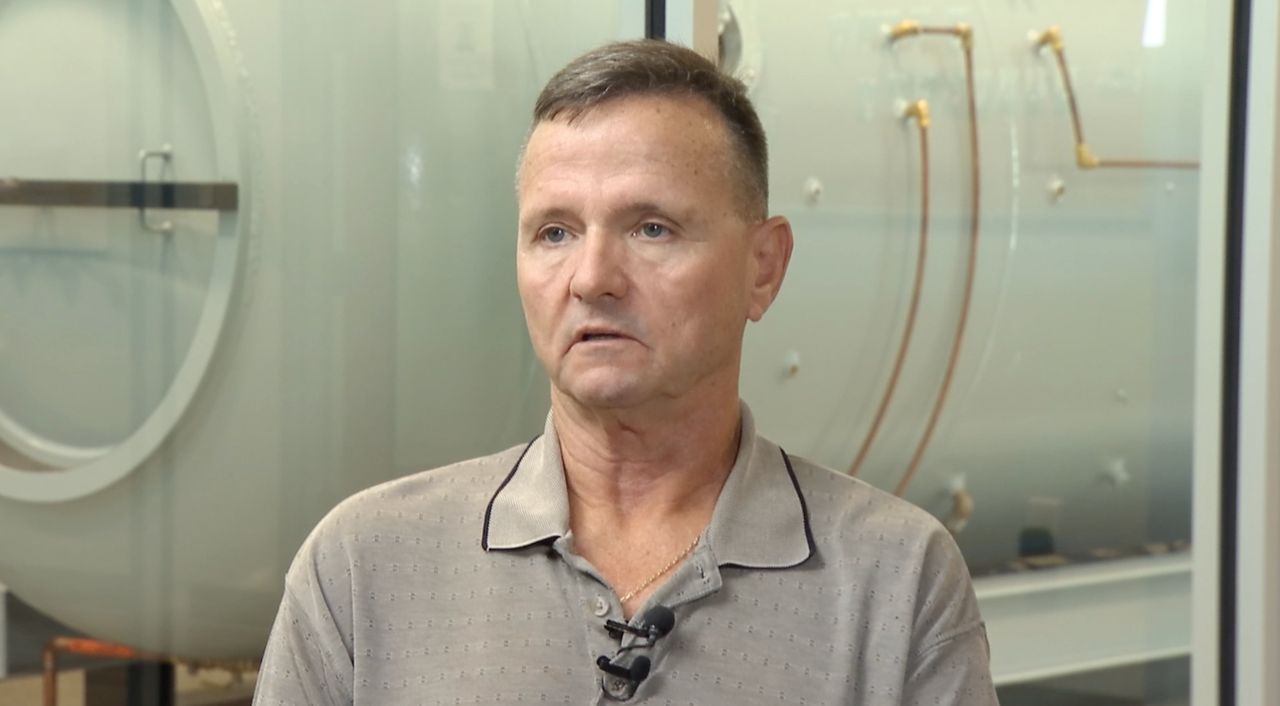 RALEIGH, N.C. — Post-traumatic stress disorder and the lack of care for it are two issues plaguing the veteran population. Now, there’s an option: hyperbaric oxygen therapy. The option became available after the state legislature designated funding for this purpose.

Some who are retired from military service are giving it a shot.


Malvin “Chip” Haubenstein takes civilian life one day at a time. The retired marine has a new regimen.

“There’s no such thing as light duty,” Haubenstein said.

His mission now is to arm his mind and body against post-traumatic stress disorder.

Part of doing that is through his new HBOT (hyperbaric oxygen therapy). The other part is to unlearn some of the habits and mindsets of toughness instilled into him as a soldier.

“It’s like being a drill instructor. You’re standing there and it’s 12 degrees and you’re in short sleeves. You’re not cold. You’re a manikin. You’re infallible. Nothing bothers you. That’s more or less the way it was when I was coming through the ranks,” he said.

Haubenstein isn’t battling alone. The state assembly set aside $150,000 in public funding for veterans living with PTSD to use the HBOT program. When N.C. Senate Bill 442 became law, it was designed to give those who have served their country a better therapeutic option. Haubenstein made use of the opportunity.

“I used to get up in the morning and walk like a mummy to the bathroom. Now I can just get up and go to the bathroom and do whatever I have to do throughout the day,” Haubenstein said.

Haubenstein says he was diagnosed with PTSD toward the end of his military career. He said his fight with the disease began in the Gulf War, during Operation Desert Storm.

“They were shooting missiles into our fobs (forward operating bases) and stuff. We were sitting in bunkers. Here, I’m sitting there a little upset myself, and [I’m] taking care of [an] 18-year-old young kid there. I had a young lady sitting right next to me. She’d just turned 18 and was already over there,” Haubenstein said.

The former master gunnery sergeant also suffered a traumatic brain injury, or TBI, on an aircraft carrier when jet engine exhaust swept him off his feet.

The TBI can amplify his PTSD symptoms by causing mood shifts and flashbacks of the incident.

“I got blown into the nets and split my cranial wide open,” he said.

Extivita is the company who provides this therapy to veterans like Haubenstein.

The nurse practitioner said breathing pure oxygen up to 90 minutes at a time significantly reduces side effects of both conditions.

The treatments, known as dives, are in a highly pressurized chamber. The experience is similar to diving underwater.

“The energy level is just ridiculous whenever I come out. It’s kind of like being binged up and bouncing off the walls. Like I just drank three cups of coffee or something,” he said.

“Folks who come in with traumatic brain injury with post-concussive symptoms, like the ones like Chip for instance and many more. They actually improve in terms of quality of life, processing speed, cognitive function, executive function and their sleep improves dramatically,” she said.

The 60-year-old tried counseling in the past but always refused prescription medications.

“Most military people that I come into contact with from my era do not want to take all these pills. It’s nothing but take a pill for this, take a pill for that, everything has a pill for it. This is something that is a natural way of healing,” he said.

After 30 years of serving his country, now his service is to his own health.

“It’s one of those things that it doesn’t make any less of a man or a woman to go and get the help you need, because it’s well more worth than sitting and drowning in your own sorrow,” he said.

The Community Foundation of N.C. East is a nonprofit organization designated as the financial custodian of the HBOT program.

“Some of them who have thought about suicide no longer think about that,” Schertz said.

The treatment is $75 per session if you are in the military or a military spouse. It costs twice that amount for anyone else. Certain conditions apply for insurance coverage.

Schertz said Exitivita is now following up on the vets who started this therapy in March.

The medical pro said the benefits are for more than just the patient.

“It saves some marriages, I’ve heard and they go back to society and function,” she said.