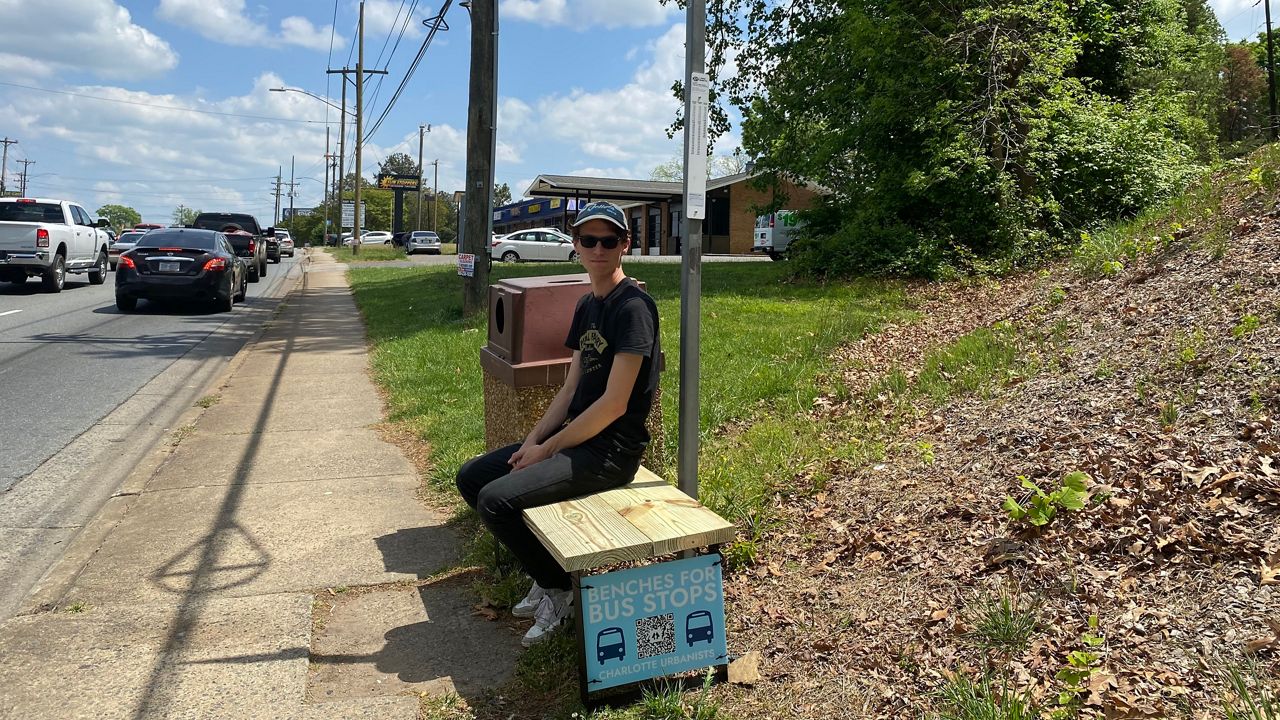 CHARLOTTE, N.C. — A grassroots organization is helping add benches for bus stops in the Charlotte area.

In the Charlotte area, 21% of bus stops have seating and or covers

Jacob Unterreiner and John Holmes are the organizers of Charlotte Urbanists, a group started earlier this year with the goal of making Charlotte a better place to live. The organization is passionate about public transit, sustainable development and safe streets for users.

According to Charlotte Area Transit System, as of March CATS had 3,104 bus stops and approximately 652 bus stops or 21% of all stops have seating and or covers.

A CATS spokesperson said in the past amenities have been placed at bus stops primarily based on ridership levels.

Charlotte Urbanists placed many of the benches in locations where most of the riders requested it. As soon as they’re built, people use them.

Unterreiner started paying attention to bus stops when he worked as a truck driver in Charlotte last year.

“I would've just noticed ‘wait a minute that person is standing right there in the sun or in the rain without any bench or anything.' As someone who is passionate about public transportation. I thought this would be a low-cost way where we can really help make the transit experience better,” Unterreiner said.

The UNC Charlotte graduate lives in Salisbury, but he spends a lot of time in Charlotte. He usually uses his car to get around the city, but he would rather bike, take the bus or light rail.

“I would love to see Charlotte become a place where you can get around without a car in many cases,” Unterreiner said.

Charlotte Urbanists have built 30 benches thus far with the support of an online fundraiser.

“Everyone who is riding transit deserves the dignity of a place to sit, at the very least,” Unterreiner said.

Each bench costs $80 to build.

Riders, including Rodolfo Mora, are grateful for this effort.

“Elderly people can use them when they’re waiting for the bus,” Mora said.

He said the group is using the concept of tactical urbanism, which uses low-cost temporary solutions to demonstrate and test concepts for improving the city.

“Ours are temporary. There are more to make a statement and to in a low-cost way provide the solution,” Unterreiner said.

CATS said it’s aware of the efforts of Charlotte Urbanists and their conversation is on going.

He said he hopes CATS considers getting access to more funding to improve public transit and find ways of doing it in a cost-effective way.

According to CATS, the agency is working to add more factors taken into consideration when deciding if a bus stop needs amenities, including wait time, destination and equity.

Metropolitan Transit Commission, which is the policy board of CATS, will consider the new strategy during its next meeting.

The Gofundme.com site is not managed by Spectrum News 1. For more information on how the site works and the rules visit  http://www.gofundme.com/safety.