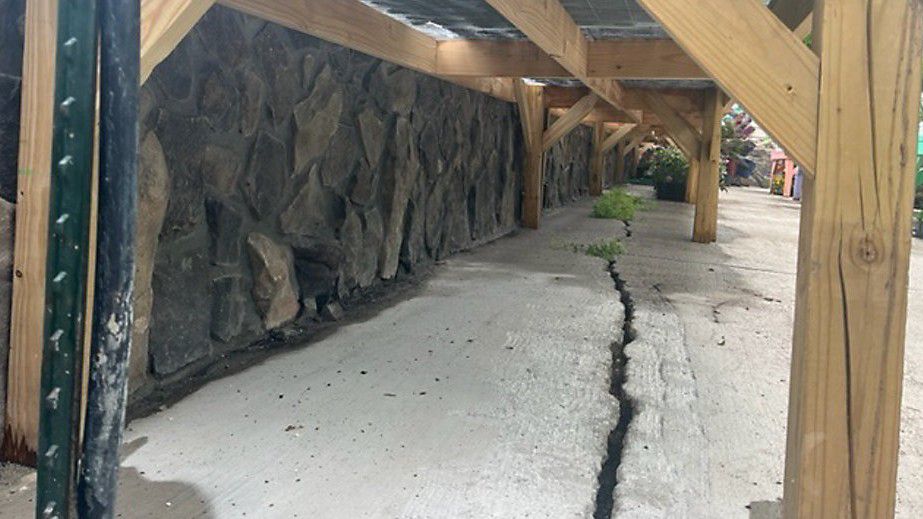 SPARTA, N.C. — Residents and business owners are working to rebuild after a 2020 earthquake caused damage.

And, just recently, a discovery of a fault line was made.

Local business owner, Scott Smith, says the crack in his greenhouse was not there before 2020.

"That cracked just lowered it about four inches," Smith says.

The earthquake shook Sparta in August 2020 and caused major damage to his business.

"We weren't here. We were at home but we had calls that people had come in and said it shook our doors wide open and busted a lot of stuff," Smith said. "It shook our building and busted all the toilets in this building and that building. It broke like $5,000 or $7,000 in inventory."

Smith says for 25 years he has owned a lawn company. Back in 2017, they built their business and it grew fast.

"We just started out mowing yards and landscaping," Smith said. "Now we're into storage and everything else.

Smith says the fault line runs directly under his business.

"You're 16 inches different from here to there. The fault line comes right across here and the back of that building," Smith said, showing the crack.

Smith says he has to leave the damage.

"We can't take down our buildings and start over," Smith said.

Appalachian State University Professor Scott Marshall says it’s impossible to predict when another earthquake will hit or where. He has been studying them for years.

Marshall says the fault line that was found is not technically new, just new to research.

Faults are areas where earthquakes occur, according to the USGS.

"All you would see in many areas where there are active faults is maybe a hill, and as you know, in the Appalachians hills aren't uncommon so it's more that this fault is new to geologists that are mapping things," Marshall said.