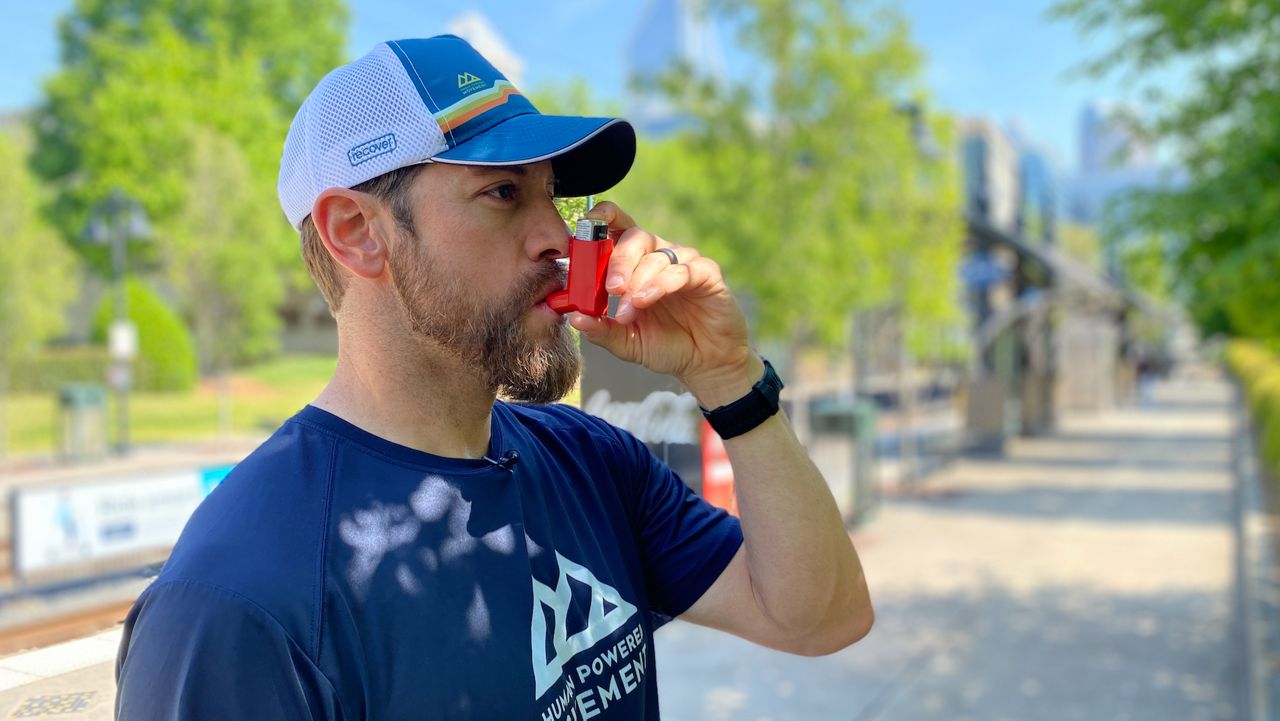 CHARLOTTE, N.C. — Mecklenburg County is the most polluted county in North Carolina, according to a recent report by the American Lung Association. The good news is that it’s an improvement from last year.

Mecklenburg County received an F rating in ozone pollution, according to a report by the American Lung Association

Ozone pollution or smog happens when pollutants emitted by cars, refineries and other industrial places chemically react in the presence of sunlight

Mecklenburg County received a B in particle pollution, which is caused by construction sites, unpaved roads, smokestacks or fires

Charlotte is tied as the 41st most polluted city, which is an improvement from last year when it was ranked 34th

Adam Bratton has a routine every time he goes running. First, he stretches and then he takes his inhaler. Bratton was born with asthma. He loves running. But some days in Charlotte it’s hard for him just to breathe because of ozone pollution.

“Think of it like a restricted airway,” Bratton said. "You are only operating at about 50 to 60% of what you normally would, so it’s harder to breathe, and I don’t get as much oxygen.”

According to the EPA ozone pollution can damage the airways and make it difficult to breathe. It can also increase the likelihood of an asthma attack. A report from the American Lung Association shows Mecklenburg County had 15 code orange days in the last three years. This is unhealthy air quality days for sensitive groups like those with asthma.

The report gives Mecklenburg County an F rating, which is the worst in the state. In comparsion Wake County, where Raleigh is located, received a B rating in ozone pollution and zero orange days. Lyerly says there could be some graphraphic reasons for this.

“Charlotte is just behind Birmingham, Alabama [in pollution rank], and that area is low-lying and has some hills and mountainous regions around it that traps the air,” Lyerly said.

“While we believe assigning Mecklenburg County a grade of 'F' each year is misleading and ignores the significant improvements in local ozone concentrations, we agree that continued improvement in air quality provides additional health benefits for county residents,” Green said. “That is why Mecklenburg County Air Quality is working to continue the long trend of air quality improvements in the county through programs like Grants to Replace Aging Diesel Engines and Breathing Room. These efforts are good for public health and decrease the likelihood that our region will violate the health-based standard in the future.”

Bratton says we all can play a role in reducing air pollution. His work recently biked 100 miles to pick up a product instead of having it shipped.

“It was another way to avoid the automobile if we can,” Bratton said. “If we all did one thing each day, that can compound and result in a big change.”

The American Lung Association is calling on the Biden administration to strengthen the national limits on both short-term and year-round particulate matter air pollution. The report didn’t measure pollution in all counties in North Carolina because it either had incomplete monitoring or there was no data collected. Most of the highly populated counties were measured.