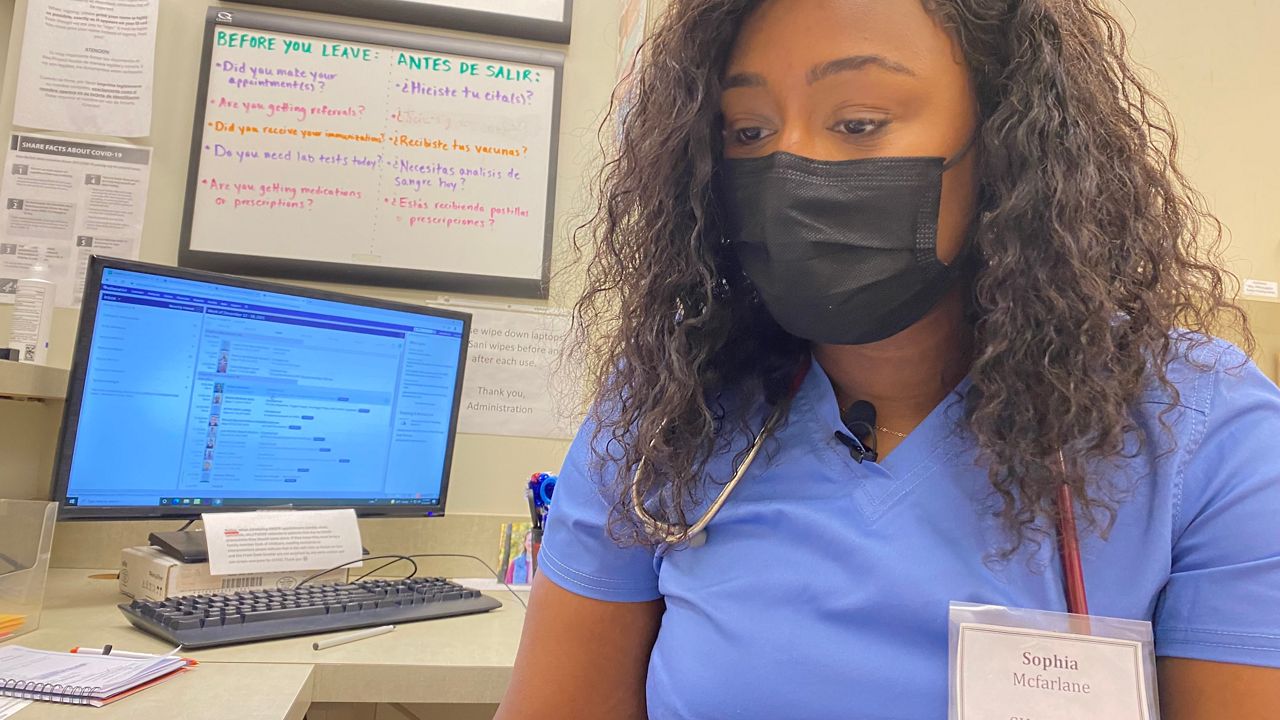 CHAPEL HILL, N.C. — Knowing the human body is crucial to practicing medicine. Some knowledge is only skin deep.

A Nigerian medical student, Chidiebere Ibe, posted an illustration of a Black fetus on Instagram

In an Instagram post that’s gone viral, a Nigerian medical student created an illustration of a Black fetus, a rarity in medical imagery.

What is more common is for medical students like Sophia McFarlane to be looking at textbooks primarily full of only white-skinned people.

“I want to go into obstetrics and gynecology. That’s why the illustration was great as a Black woman,” McFarlane said.

McFarlane is in her third year at UNC-Chapel Hill Medical School. If her dreams come true, she would become an OB-GYN. Underrepresentation in medicine is nothing new, so when the work of another medical student caught her eye, it resonated with McFarlane on many levels.

“It was also a depiction of a field that I'm interested in and I've been studying fetuses in mothers, and I just never had seen it depicted in a Black person. So that’s definitely why I liked the illustration,” McFarlane said.

Continued: Pictured below are McFarlane’s parents. She told me her father immigrated from Jamaica and her mother is from Trinidad. You can see them pictured below.
(Courtesy: Sophia McFarlane). @SpecNews1RDU pic.twitter.com/RbE8KZ1tNq

There are real-world implications for a lack of diversity represented in textbooks. Black physicians interviewed for this story said bias in medical education creates a bias in medical treatment and worse health outcomes for patients with darker skin.

A 2018 study looking at anatomical imagery from the Journal of Social Science and Medicine revealed less than 5% of all textbooks used at top U.S. medical schools included dark skin tones.

Spectrum News 1 followed the aspiring doctor around at a clinic for overlooked demographics called Urban Ministries. The health clinic was created for people falling through the cracks in the American health care system.

“I want to work with the urban underserved,” McFarlane said. “It just shows me the dynamics of being a physician in a low-resource setting and being able to run a community-based clinic. I think (it) is just a unique opportunity to be a part of the community.”

It is a perfect setting for a Kenan Scholar enrolled in UNC’s Medical School. There are two Kenan Scholar programs at the medical school: one for urban settings and one for rural settings. Urban Ministries gives McFarlane the chance to see up close the challenges people living in cities face when finding care.

“When did you step on a nail? Do you remember the date?” McFarlane asked a patient.

McFarlane said she is continuously learning about patient care as she learns about the human body. One of the parameters of her time spent at the clinic is serving patients who may not be insured and may not speak English. Typically, a translator stands in the room as McFarlane or one of her peers is assessing the patient’s symptoms. The 24-year-old said this is not uncommon.

“I mean I feel like my school well-prepared me for it,” McFarlane said.

So did life because historically, from colonialism through Jim Crow into the present, she said Black people have been underserved too.

“One of the great things about Urban Ministries is that it takes a holistic approach, which I really like working in this clinic,” McFarlane said.

Outside of the clinic, too often McFarlane said she and her classmate Dylané Davis are flipping through medical textbooks full of people who don’t look like them.

McFarlane pointed to a McGraw-Hill textbook she uses for class.

Davis, 29, grew up in Fayetteville and echoed what her friend said.

"It's just really disappointing in my opinion. If you're unable to identify certain conditions and things on different skin colors, tones, shades, backgrounds, things like that, then you are going to miss it," Davis said.

When the pair isn’t studying, she is practicing medicine back at the UM clinic. Each time McFarlane is finished looking at a patient, she goes over a patient treatment plan with Dr. Elizabeth Campbell, who runs the clinic.

“Yeah then I present to her my plan and my ideas, then she tweaks it to help me understand how much medicine to give. Then we go back, and we talk to the patient together,” McFarlane said.

The third-year med student can relate to the patient she met at the beginning of this story; McFarlane is a first-generation American whose parents immigrated from Trinidad and Jamaica.

“Representing that with my family and just seeing the struggles of navigating the U.S. health care system as a citizen is hard,” McFarlane said.

Being a woman drives her as well.

Davis reiterated her passion for entering a space she has lived in her own life at times.

“It’s frustrating. Sometimes you sort of have your back against the wall and have to focus on what you can do now for them, but that’s why we came. We knew it wasn’t going to be easy. We have been through it. Our friends have been through it so who better to do it than us,” Davis said.

The pair said these factors are the ingredients they will carry with them into every patient’s room.

“Being able to be that bridge or make patients feel comfortable when they see us talking to them in (the) clinic. It’s like they are talking to a family member,” McFarlane said.