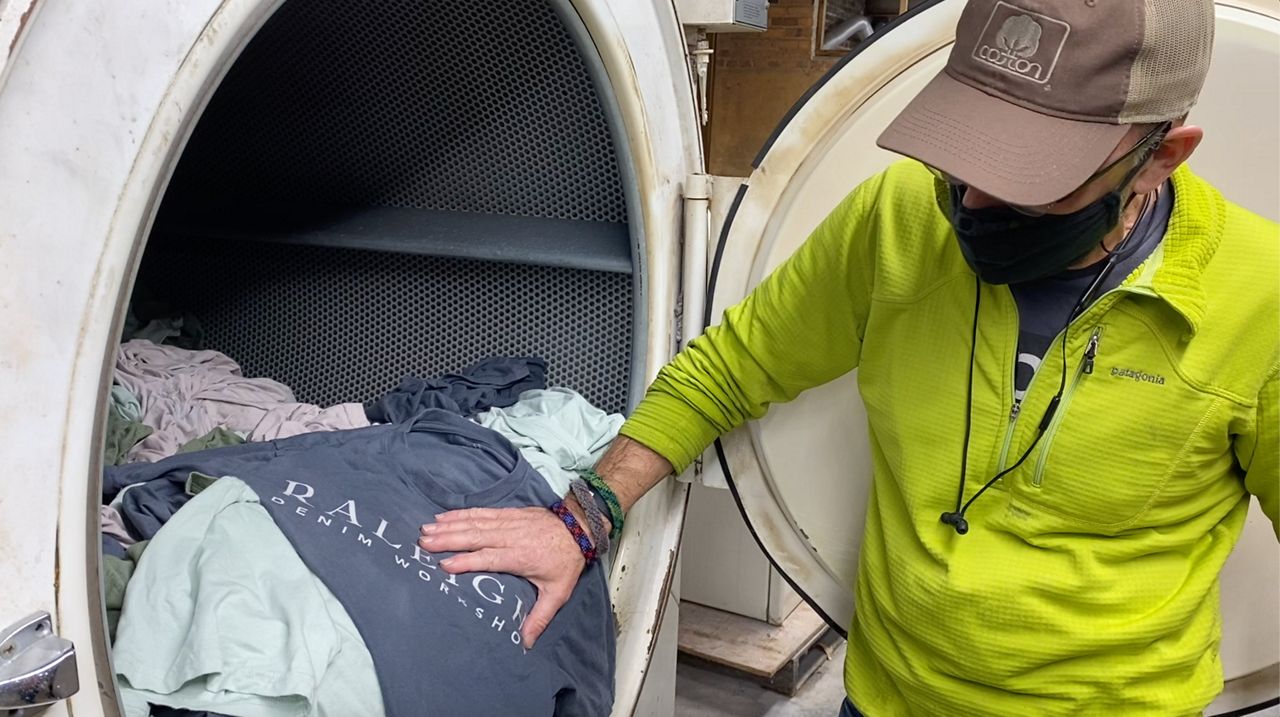 BURLINGTON, N.C. — According to the United States Department of Agriculture, the U.S. is the third largest producer of cotton in the world, but it’s also the world’s leading exporter of raw cotton.

However, one Burlington company is working to reclaim the phrase “Made in the USA” with a focus on being environmentally friendly.

The USA is the world’s leading exporter of raw cotton

A lot of thought goes into Solid State Clothing’s fairly simple looking tie-dye t-shirts, specifically on how to make them sustainable.

SUSTAINABLE CLOTHING: The USA is the 3rd largest producer of cotton in the world but it's also the world's leading exporter of raw cotton 🌎 I spoke with Eric Henry, the founder of Solid State Clothing, about why he's working to change that 👕 Full story on @SpecNews1RDU pic.twitter.com/1aXpdZIalW

“You know this was locally sourced cotton all made in North and South Carolina,” Courtney Lockemer, the brand manager for Solid State Clothing, said. “We dyed it with plant-based dyes that are nontoxic. Pomegranate rind extract and the green color comes from adding iron.”

When all is said and done, customers can scan the QR code on the shirt and track the entire supply chain.

“We want people to look at clothes as an investment. Not just a spur of the moment thing they wear three or four times and then throw away,” Henry said.

Henry insists there’s no reason to outsource anything. The shirts he makes travel less than 600 miles from where the seeds were planted on a farm to his Burlington warehouse.

“Compare that to a normal imported t-shirt, which is probably domestic cotton because we grow great cotton in this country. You’re looking at a t-shirt that’s probably going to travel 13,000 to 15,000 miles. And you have no idea what’s behind that supply chain. You’ll get that last country of origin where it’s made. It could say China but it could be U.S. cotton. You have no idea,” Henry said.

Henry admits his shirts could be made cheaper in a foreign country but he believes that’s cheating the system. He says this is part of a trend towards more ethical and responsible clothing.

“You’re investing in your local economy. All these people are in the Carolinas, so when you make this investment, you are supporting people that live in your community. 97% to 98% of the clothes we’re wearing are made overseas. That typically benefits the brand but the consumers or the manufacturers don’t participate because they’re made somewhere else. This is all done right here,” Henry said.

“It’s very similar with what happened to the farm to fork movement. People realized the value of connecting with their local farmer and supporting that local farmer and understanding the whole food process. I think people are starting to take that relationship with clothes because we buy a lot of clothes,” Henry said.

Henry says because he uses all locally sourced products and labor, his company was able to avoid supply chain issues during the pandemic.