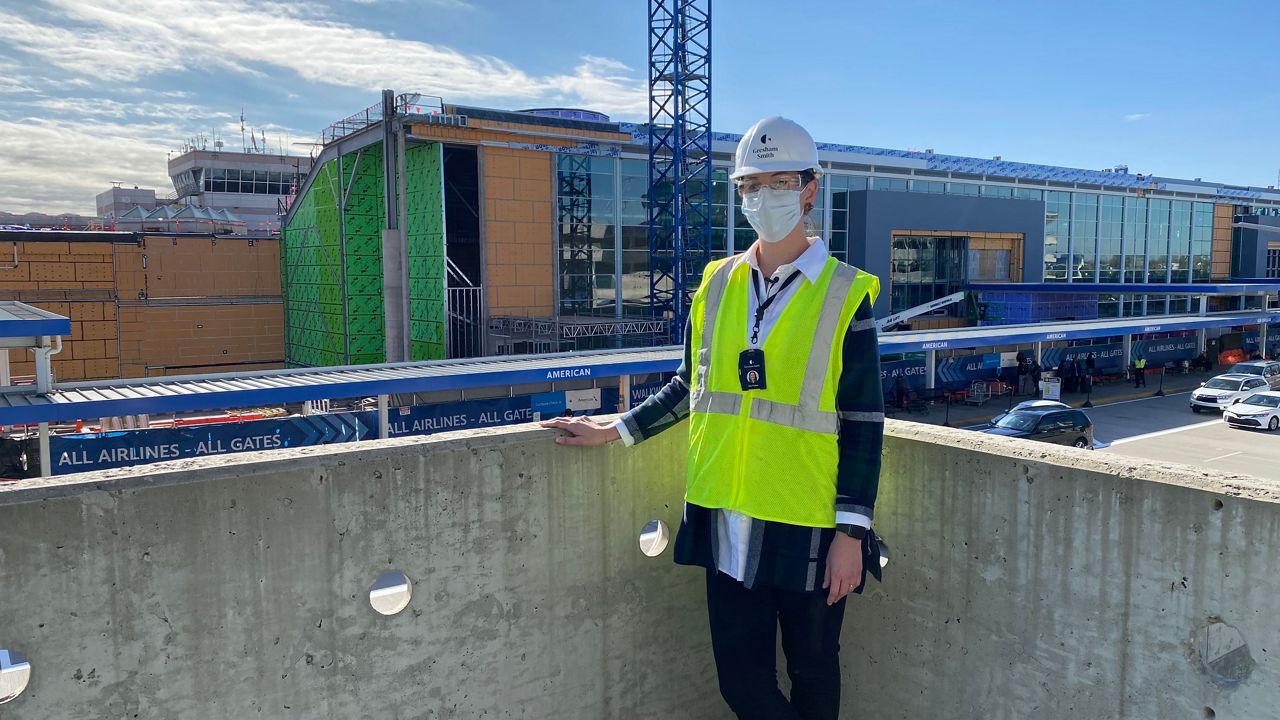 Zoe Fisher is the lead architect on the $600 million airport expansion project that’ll connect the parking garage directly to the terminal.

CHARLOTTE, N.C. — Zoe Fisher, an architect with Gresham Smith laces up her work boots and heads to the office, but it’s not your typical office.

There’s a growing number of women entering the architecture industry

She works in the male-dominated side of the industry: construction

The Charlotte Douglas International Airport is still a familiar site to all Charlotteans and those visiting the Queen City.

Fisher’s the lead architect on the $600 million expansion project that’ll connect the parking garage directly to the terminal.

“It is very surreal to be a key player in this project,” Fisher said.

It may be surreal to Fisher, but wearing a hard hat is nothing new.

“I have basically been on a construction site since I could walk,” she said.

Her dad was a general contractor. She followed his footsteps and kept the family legacy going in an industry where women are few and far in between.

“I think there was always that, ‘oh, you’re a woman and you’re going to be doing architecture, there’s only men that do construction,'” Fisher said.

A majority of architects in the U.S. are men. However, data from the National Council of Architectural Registration Boards shows women are catching up. Last year the percentage of female architects jumped to 41%, a 3% jump in one year.

The construction industry overall has diversified over the years, including more women.

Demi Knight Clark started the organization She Built This City, which is geared toward creating more equitable work environments for women. It has programs for girls as young as 9 years old and for adults who are already working in the industry.

LaToya Faustin, executive director of the organization, said the number of women working in construction has grown since She Built This City was created. Women represented less than 9% of the industry before the organization was started in 2019, to about 13% today.

It's a significant increase from when Fisher started in the industry 10 years ago, but she pushed through anyway.

“Fighting every imposter syndrome message that my brain was giving me and understanding that my voice had power,” she said.

When Fisher’s done at the airport, she trades in her work boots for suede fall boots and goes into her actual office and continues to pay it forward.

She says this is the first office she’s worked in where women outnumber men.

Women make up 67% of the workers at this Gresham Smith office.

“One of the wonderful things about working at a firm that takes diversity so seriously is that it brings and encourages every voice to be heard,” she said.

The terminal expansion is scheduled to be complete in 2025.