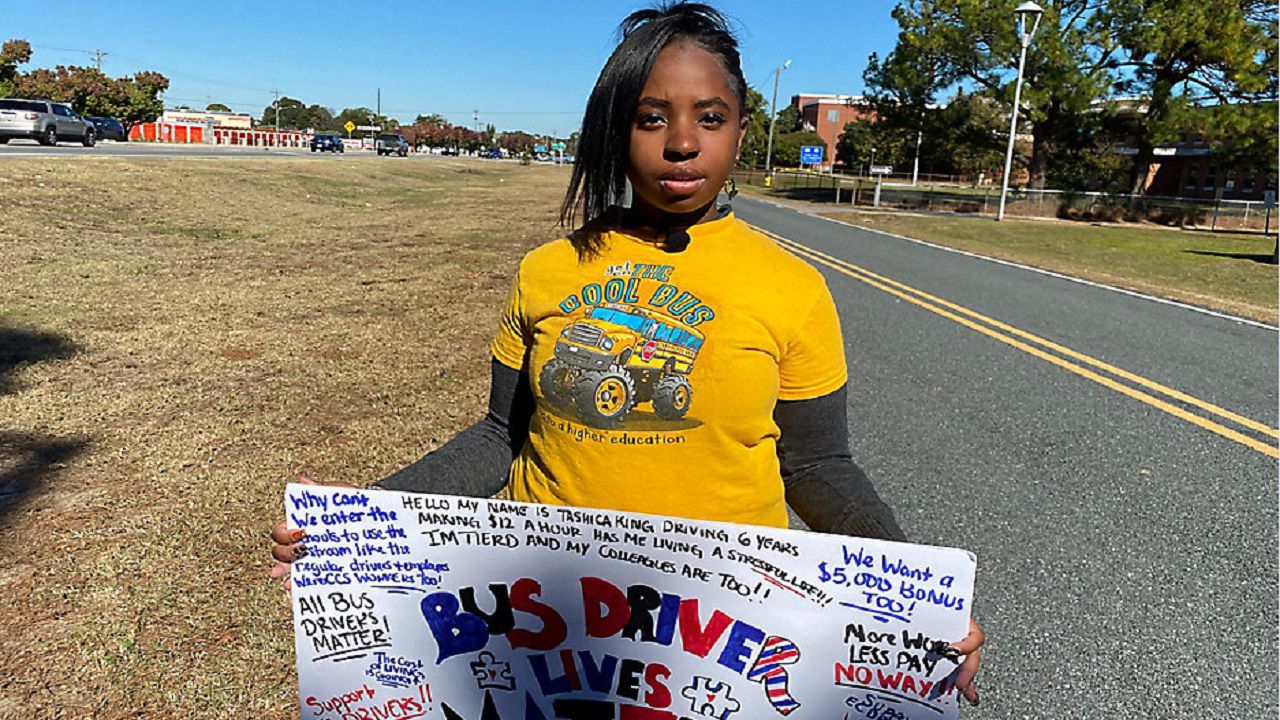 Tashica King, 26, is one of the bus drivers in Cumberland County protesting over low wages.

'We aren’t able to afford the cost of living right now': More than 100 bus drivers on strike in Cumberland County over low wages

FAYETTEVILLE, N.C. — More than 100 bus drivers in Cumberland County are on strike, including those who operate buses for special-needs children. With a starting pay of $12.21 per hour, bus drivers say they are protesting low wages.

Starting pay is $12, which is around the amount that 26-year-old bus driver Tashica King makes

Tashica King, 26, is one of the younger bus drivers who called out sick. King, who has been a bus driver for six years, wants fair compensation for the long hours and hard work.

“The low wage. We aren’t able to afford the cost of living right now,” King said. “We’re not able to live. Like me, I donate plasma to get back and forth to work. I shouldn’t have to do that.”

As a government employee and state worker, King feels she deserves more. She drives a bus for kids with special needs, and she relishes her time with them.

“When I’m with them, like all of the issues that I could be having that day, it all goes away,” King said. “I enjoy my kids, and I enjoy what I do.”

However, she says the demands of driving a bus for special-needs children can be a lot for one person.

“You shouldn’t be on a bus having to deal with that all by yourself,” King said. “I could be strapping down a wheelchair, which I’ve done before. There was a time when I had three wheelchairs on my bus, and I was by myself, and I had a student that was in a harness, and I couldn’t watch him. And he got out.”

Even though King makes above minimum wage, she is not one of the top earners. King says she is not going to stop protesting until the group’s demands are met. School officials say there is a chance that protests could continue into next week, and they are asking parents to be prepared for that.

School leaders acknowledge there is a need to raise salaries for employees.

King has not seen a raise since she started. And, while she feels undervalued by school officials, she is glad to have full support from the parents.

“It wasn’t one parent that I had on my route that didn’t support me,” King said. “And that means the world to me.”

School leaders say they plan to take up the topic of raises at the Board of Education Finance Committee meeting on December 7.