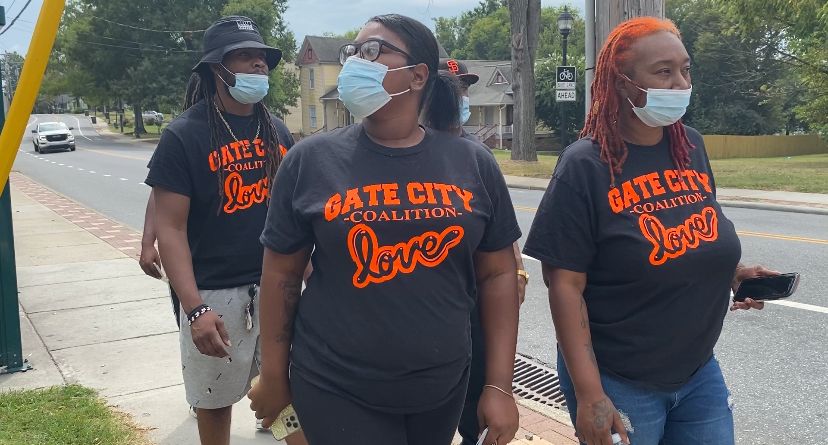 GREENSBORO, N.C. — A Triad woman is leading the charge against violence in her city as program manager of Gate City Coalition.

Gate City Coalition started in 2018 in response to a string of shootings that claimed the lives of a few teenagers. The community was shaken, and wanted to put a stop to the violence. Ingram Bell and a few of her team members were the first to launch Gate City Coalition, which is a branch of Cure Violence.

The program’s intent spoke to Bell. She had experienced gun violence living in Greensboro. Back in 2011, she was shot in the head.

Since 2018, she’s been working with Gate City Coalition to interrupt violence in her community. The program works to de-escalate and mediate violence without police intervention. Bell and her team work to connect with people in neighborhoods, sometimes in response to shootings. They emphasize the message of love and unity throughout their target areas of Martin Luther King Jr. Drive and Smith Homes.

“Not everybody that commits crime, or commits violence, wants to continue on that path. They want to be a change agent,” Bell said.

Bell is no stranger to helping people. Her mother was a foster parent for more than thirty years. Helping others was their family’s way of life.

“My mother was a foster parent for thirty plus years. On paper, she had over 100 kids in and out of our house, so I’ve been doing this type of work for years,” Bell said.

Gate City Coalition also connects people with the resources they need, such as housing and employment. The organization works with more than 30 staffing agencies in the Triad to match people with job opportunities, according to Starmecca Parham. The team spends a lot of time with community outreach, offering safe community events and providing food for the community.

Gate City Coalition has seen success in their approach. In 2018, there were more than 40 shootings in their target area on Martin Luther King Dr. A year after the group’s arrival, that number dropped to zero according to Bell. Bell says Gate City Coalition is seeking more funding to continue their work in creating a safer community.