RALEIGH, N.C. (AP) — Two longtime Democratic congressmen with a combined six decades of experience announced Monday that they plan to retire at the end of their terms, another worrying sign for the party’s uphill climb to keep control of the House in next year’s midterm elections.

The news comes just days after Rep. John Yarmuth of Kentucky, the influential chair of the House Budget Committee, announced his own decision to retire, bringing to a dozen the total number of House Democrats who have revealed plans to retire or seek other office.

While all three men cited various motivations — the realities of redistricting and a desire to spend more time with their families among them — the decisions underscore the challenges Democrats face as they try to hang on to their razor-thin majorities in both chambers of Congress. The party that wins the White House typically loses congressional seats in the following midterm elections, and more members are expected to depart as they contend with the reality that they could find themselves in the minority.

But that didn’t seem to be the case with Monday’s departures. 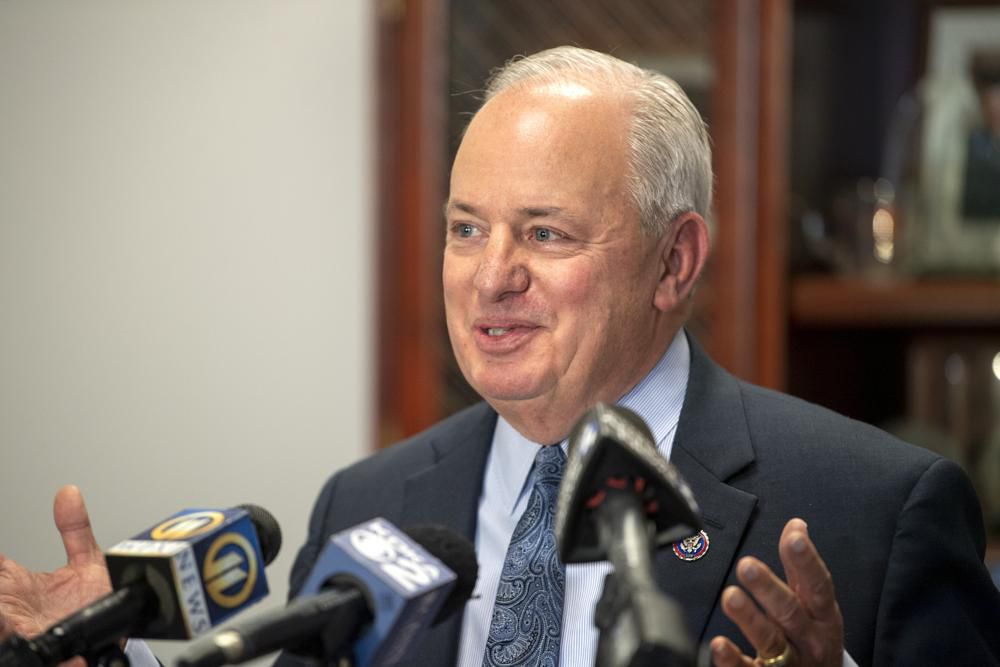 Democratic U.S. Rep. Mike Doyle speaks during a news conference to announce that he will not be running to re-election and plans to retire after his current term, Monday, Oct. 18, 2021, in his office in Pittsburgh. (Alexandra Wimley/Pittsburgh Post-Gazette via AP)

“I believe the time has come to pass the torch to the next generation,” Doyle said at a news conference at his Pittsburgh office.

In addition to passing the torch, he said the COVID-19 pandemic had accelerated his thinking about retiring with his wife. And he noted that redistricting will likely bring substantial change to his district’s boundaries, most likely pushing it outside Allegheny County in the southwestern part of the state.

“You know, this is going to be a brand-new district, new people, new counties maybe, and a good starting point for a new member of Congress to get acclimated in that district and go from there,” he said.

Doyle was first elected in 1994 in a district that currently includes all of Pittsburgh and some of its increasingly liberal-leaning suburbs. He has easily fended off primary challenges from the left while handily winning re-election against token Republican opposition, and he wasn’t seen as vulnerable.

“I just think he felt it was time,” Doyle’s former campaign strategist, Mike Mikus, said of the decision.

In North Carolina, Price has represented the 4th Congressional District in the Raleigh-Durham area for all but one term since joining the House in 1987. As the state’s only member of the powerful House Appropriations Committee, he has steered money to state projects and chairs the panel’s transportation, housing and urban development subcommittee.

Price’s announcement comes as state lawmakers are starting to redraw North Carolina’s House district boundaries based on 2020 census figures. Even with Republicans in control of the General Assembly, almost any reconfigured district drawn in the heavily Democratic region of the state would have made Price a heavy favorite to win next year. He has won re-election with at least two-thirds of the vote during every general election since 2012.

“So while it is time for me to retire, it is no time to flag in our efforts to secure a ‘more perfect union’ and to protect and expand our democracy,” Price said in a news release announcing his decision.

Price had been considering retirement for some time, according to his former chief of staff Asher Hildebrand, and might have stepped down earlier if Donald Trump had not been elected president in 2016. Elected officials with experience, such as Price, were able “to see the country through a moment of considerable perils,” Hildebrand said.

Hildebrand also noted that it’s highly likely that any district drawn in Price’s region will remain in Democratic hands, so “this decision will have no bearing on the House majority.”

Both retirements will likely set off intense scrambles for Democrats seeking to succeed them. “These opportunities don’t come around very often,” Mikus said.

Western Pennsylvania is already in line to lose a House seat because of lackluster population growth. Democrats in Pittsburgh hope to keep two Democratic-leaning congressional districts, and Doyle’s departure opens the possibility of splitting Pittsburgh to help make that happen.

“You don’t have somebody fiercely fighting to defend their territory,” said Marty Marks, a Pittsburgh-based Democratic campaign consultant.

Many of the other Democratic members of Congress who have announced their retirement plans hail from hotly contested swing districts that could flip Republican and ultimately decide control of the House. Several are running for the Senate.

The GOP has already announced plans to target many of the seats being vacated, including those held by Conor Lamb of Pennsylvania, who is running for Senate; Filemon Vela of Texas; Cheri Bustos of Illinois; and Ron Kind of Wisconsin.

In recent years, Republicans have seen more retirements than Democrats, including in 2018, when 37 Republicans declined to seek reelection ahead of bruising losses, versus just 18 Democrats, according to the political tracking website Ballotpedia. But members typically wait until later in the cycle — usually in January — to announce their retirements.

So far, 10 House Republicans have either stepped down this year or have said they aren’t seeking reelection in 2022.