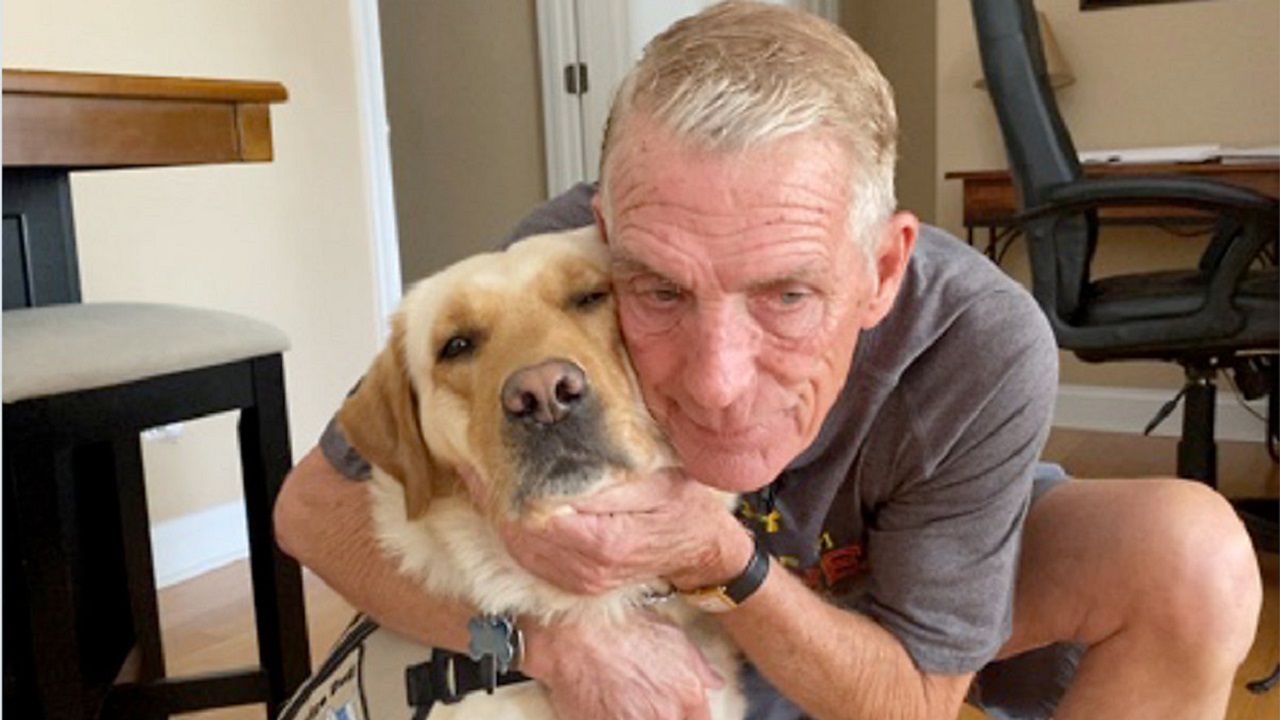 KANNAPOLIS, N.C. — A new bill will make a big difference for veterans suffering from PTSD.

It will help pair service dogs with veterans suffering from PTSD

In August, Congress passed the PAWS Act of 2021, which stands for Puppies Assisting Wounded Servicemembers.

It will allow the Department of Veterans Affairs to grant funding to pair veterans who suffer from PTSD with service dogs.

"The Puppies Assisting Wounded Servicemembers (PAWS) Act of 2021 enables VA to pair eligible Veterans with PTSD — regardless of whether or not they have mobility issues — with service dogs from accredited programs,” said a VA spokesperson in a statement. "The Veterans Health Administration (VHA) will develop a five-year pilot program in support of implementation of the PAWS Act at selected sites across the nation. More information about this effort is forthcoming.”

Ronald Hudgens, a veteran who served as a U.S. Marine in Vietnam, says this bill could be life-changing for veterans like him.

"Until getting him, it was just something that I suffered through,” Hudgens said. "I was real angry. I felt anxious all of the time. If I went anywhere, my back always had to be to a wall, didn’t want anyone behind me. I didn’t feel comfortable being around people. It was just miserable.”

Dr. Katrice Byrd, a licensed social worker and Charlotte mental health counselor, says service dogs can help with things like anxiety, and they can be soothing for someone with PTSD.

“So, it’s an additional support and sometimes that is all the veteran needs is an additional companion to assist them with these PTSD symptoms,” Byrd said.

"He’s wonderful, he is a godsent blessing to me,” Hudgens said. “He has helped me to overcome my anxiety, my fears of going into public. He will get in front of me and block me. If I have nightmares, he senses any anxiety that I have or if I am sad.”

But, funding a service dog is not cheap.

Regina Hickey owns the Charlotte-based All Aspects Service Dogs, which trains and funds service dogs to veterans free of cost. She estimates it costs her $40,000 to $60,000 to train one dog.

“When we start with a puppy, the puppy ranges from $2,500 to $3,500,” Hickey said. "Then we have all of your vet bills. You have your kennel care. You have your training. You take it out in public with your public access and after a few years, it just adds up."

Costs can vary, but either way, it’s something most people can’t afford. Which is why Hudgens says he was elated when he found out the PAWS Act was passed.

“Pure joy. These dogs afford you that luxury that you can go back to work, go into public places. That you can live without boundaries,” he said. "He has helped me in every way. ”