On a different spoke: Fixing bikes and shaping futures

WILMINGTON, N.C – Dusty Casteen of A Bike for Every Child is turning two wheels into conversation starters with the youth of Wilmington. Working side by side with them, he teaches both practical mechanical skills and life skills that will hopefully keep them on the right track.

A Bike for Every Child gives away over 1,000 free bikes a year to kids in need

“We try to use a bicycle as a way to start a relationship with people, so it's pretty much just a vehicle for relationship building,” Casteen said.

Casteen started this operation out of his living room in 2015 after he and his best friend started finding old bikes, putting them back in motion and giving them to people in need.

“I think the first two years we didn't make a dime at all, and then from there it was really neat because the community kind of found out what we were doing and they came alongside of us and did anything from bike drives to donating parts and tools,” Casteen said.

Six years ago he didn't foresee a place where kids would come after school to work on bikes and escape the weight of the world for a bit, but now that it exists, he's doesn't want to do anything to jeopardize the bonds that have been built.

“Sometimes they've got stuff going on that you don't know about,” Casteen said. “It's hard to pick up on that until you just give them enough time to lean on you. I think all kids are really suffering right now, a lot more than they were, and this kind of gives them an opportunity to get away from all that — come to a place where they feel comfortable.” 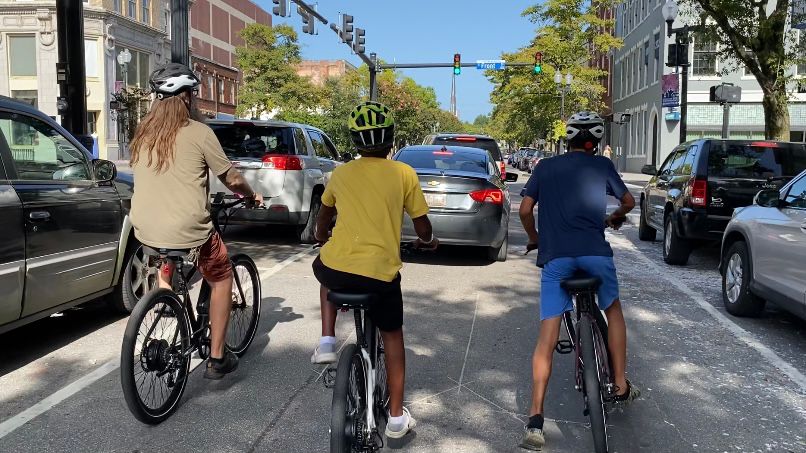 But the pandemic has made getting bike parts more of a challenge, especially for a nonprofit operating on a small budget, and Casteen hated the thought of that limiting the impact the program is having on the community.

“Sometimes it gets kind of discouraging, where you're trying to devote your whole life to doing something really good and you can't find funding or you can't find bikes or you can't find parts,” Casteen said. “The cycle industry is in shambles right now... and it's making it harder and harder for us to get what we need.”

As a way to generate more money, Casteen came up with the idea of offering bike tours of downtown Wilmington that show people some hidden spots they may not be aware of in the city.

“Every purchase price of an e-bike tour puts another kid bike on the road,” Casteen said. “So not only are you coming in and having fun, taking a ride, but you're directly responsible for a kid that can't afford a bike to get a bike in Wilmington.”

For anyone looking to make a donation, A Bike For Every Child is located in the basement of the Harrelson Center in downtown Wilmington, or you can click here to book a tour or find more information.