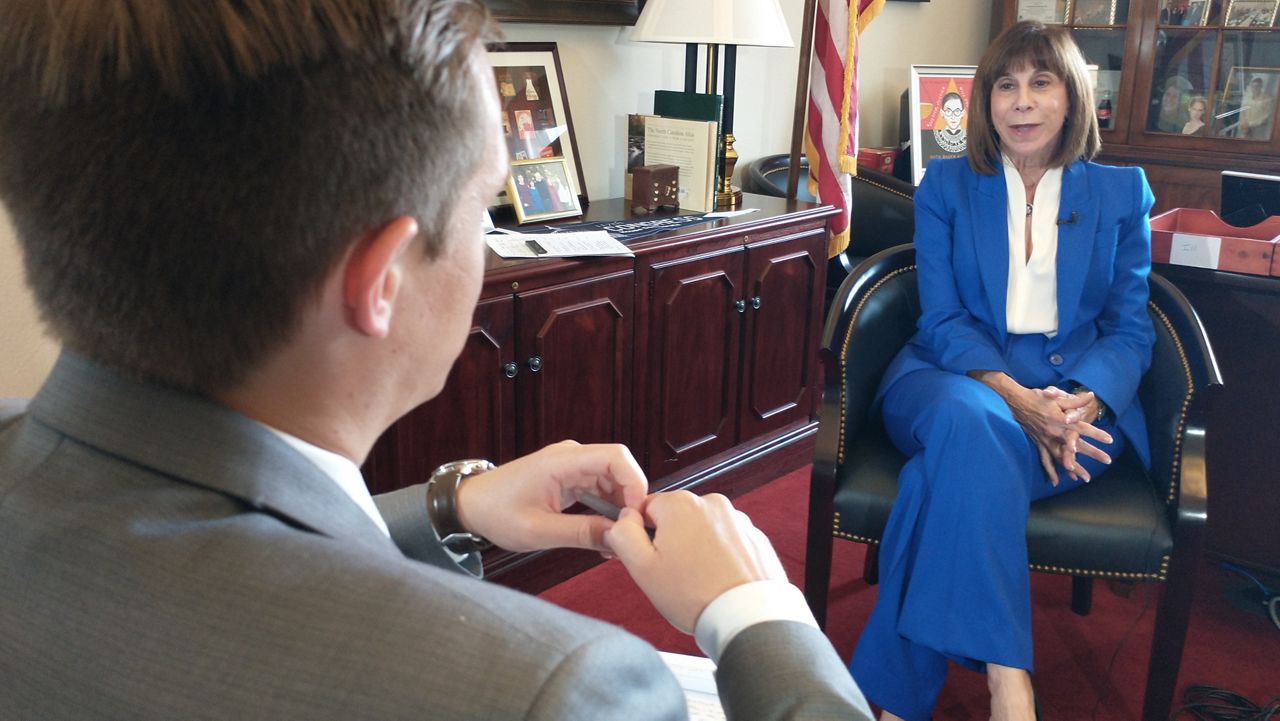 Manning, an attorney, had never held office before being elected to Congress for the 6th District which covers Greensboro.

WASHINGTON — Rep. Kathy Manning began her term in Congress wearing a mask and then facing an attack on her workplace.

“We’re sitting in the House chamber when the police came running in to say that the Capitol had been breached, and that tear gas had been released,” Manning said. “We eventually had to take cover on the floor. It was pretty extraordinary.”

Manning had never held political office before being elected in 2020

Manning, an attorney, had never held office before being elected to Congress for the 6th District, which covers Greensboro.

Her D.C. office is filled with photos of her family and some more well-known faces, including former President Barack Obama and President Joe Biden.

I interviewed two of North Carolina's freshmen lawmakers this past week and learned that (D) Rep. Kathy Manning's (@KathyManningNC) office is located across the hall from (R) @Liz_Cheney. I asked her if she's talked with her... pic.twitter.com/EDiLxv7dCT

A member of the Committee on Foreign Affairs says she is concerned about an insurgence of terrorism in Afghanistan when U.S. troops are pulled out of the country at the end of August.

Recently, Manning, who is Jewish, visited Israel with a bipartisan group of lawmakers to attend the swearing in of Israel’s new president.

Back at home, Manning co-sponsored the Medicaid Saves Lives Act, which would allow eligible people in states like North Carolina, that have not expanded Medicaid, to enroll in a federally funded Medicaid style program.

“There are only 12 states in the country that have refused to take Medicaid expansion, and we have put so many people at risk…we’ve got to get relief to these people,” Manning said.

But passing that bill, and many others, won’t be easy in a Congress splintered with division.

“It’s certainly not what I expected…for several months there were obviously hard feelings toward people who were unable to reconcile themselves with that it was a fair election, and I feel like things are starting to get better now…but it has been very difficult,” Manning said.

Political tensions may increase again as the midterm elections approach next year.

Manning, who replaced outgoing former Republican Rep. Mark Walker, said she’s focused on what has been done so far.

“We’ve done so much in just the last four months, we are continuing to move forward,” Manning said. “There’s so much we’re trying to get done. I just think we have the right people in place to move those things forward.”

'All eyes are on Congress': Rep. Deborah Ross reflects on first six months

'Controversy is his brand': Rep. Madison Cawthorn's first six plus months in office