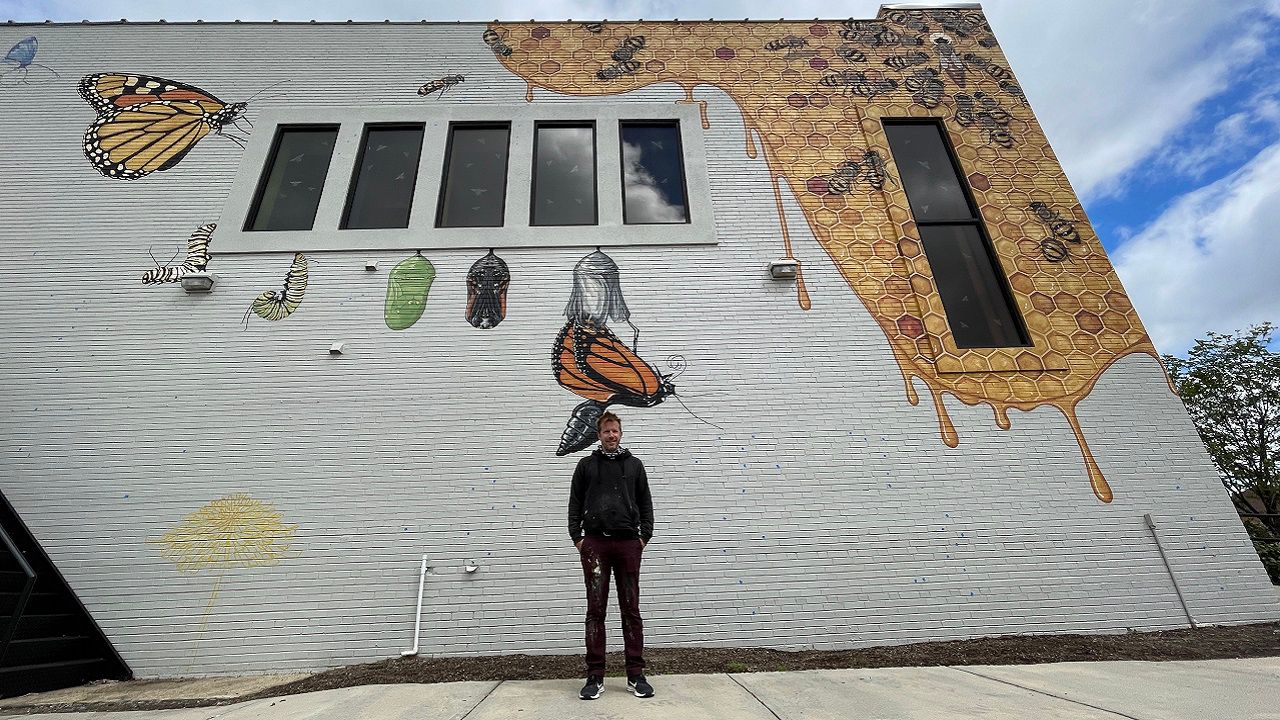 HENDERSONVILLE, N.C. — A world-renowned muralist is working his way through North Carolina, on a very specific mission with each stroke, to raise awareness about honeybees.

For Matt Willey, it’s more than just raising awareness about pollinators and what we can do to save them. It’s also about spreading the message that humans could learn a thing or two from them.

Willey started his art journey at the age of five. He was born and raised in Lexington, Massachusetts. Willey said his mother was a painter and since he was the youngest sibling, he became his mom’s helper. Since then, it never occurred to him to be anything but just that – a painter.

“I decided early on that I wanted to live with a paintbrush in my hand,” Willey said.

Willey had a successful career as an artist – painting for interior designers, being an NBA sports muralist and a portrait painter. He’s lived in Manhattan, D.C., Asheville, and now upstate New York.

It was 2008, in his studio in New York City when he found his true calling. The inspiration was a bee that had landed on his rug.

“For whatever reason, I got down on the floor and hung out with this little bee and I connected with her,” Willey said.

But the bee was dying. He said it crawled about two inches over a span of two hours before it died.

“I noticed that this little bee was more like a miniscule puppy to me, and more in the animal family than what I would think of as a bug,” Willey said.

His connection with the bee made him start researching to learn more about them.

“I came across colony collapse disorder which is this huge mystery back then, millions of bees were dying all over the world and nobody knew really why,” Willey said. “And I thought, ‘That’s fascinating I’m in the middle of New York City and I’ve heard nothing about this.'”

In his search to learn more, Willey came across altruistic self-removal from the hive. He said when a bee feels sick in the hive it will leave, for the good of the hive.

“They do this because they're hardwired to understand that their immune system is collective,” Willey said. “It's based on the health of the hive, not their individual bee body and, you know, this was years before a pandemic would teach us this exact same thing.”

It was then that he set off to share this message — that we as humans are a lot more connected than we thing and could actually learn something if we behaved like the bees.

He painted his first bee mural in LaBelle, Florida. Willey’s friend had sent him a picture of the side of a honey business he thought would make the perfect canvas.

Willey reached out to the business to see if they’d be interested, but at that time murals were illegal in LaBelle and they didn’t have the money to fund it. Willey said he told them if they could change the law, he would come up with the funds.

Within two months, he got the call that the law had been reversed and he could start his mural. Willey started fundraising and got enough to drive down. When the local paper did an article about what he was doing, money started coming in from all across the country.

The dying bee in his studio became the inspiration for his organization, “The Good of the Hive”. The organization is a movement to hand-paint 50,00 honey bees. He said this is the number necessary for a healthy, thriving hive.

Willey said he’s just painting what the bee showed him.

“Yes, I’m raising awareness about the importance of pollinators and bees, but I’m really painting us,” Willey said.

He said the hive represents humanity and other forms of life, and the queen bee represents balance.

“The bees bring in the information and then she balances,” Willey said. “She lays more drone eggs, in balance with worker bees depending on the needs, and that I think is incredibly fascinating because they're a true democracy.”

He’s painted more than 8,000 bees, with 32 projects in two countries and plans to paint in even more countries like Ireland, Italy and India.

“My goal for The Good of the Hive is that it become a lightning rod for change,” Willey said. “That we really can look at activism, we can look at pollinators, we can look at soil trees, water systems, food systems, each other, racial issues, social issues, women's issues, all of it is in the hive. We're all in this hive together.”

Willey has several bee murals across the state with some in Raleigh, Chapel Hill, Durhman, Gastonia, Carrboro, Asheville, and plans in even more cities in the state. His latest landed him in Hendersonville. The city is part of Bee City USA.

There’s a bee mural being painted in downtown Hendersonville with a powerful message about human connectivity. Hear from the artist tonight on @SpecNews1MTN. #SaveTheBees🐝 pic.twitter.com/rwM42gO4SH

The Hendersonville mural project has a few more weeks of work left before completion. It’s painted on the side of Hands On! Children’s Museum in downtown Hendersonville.