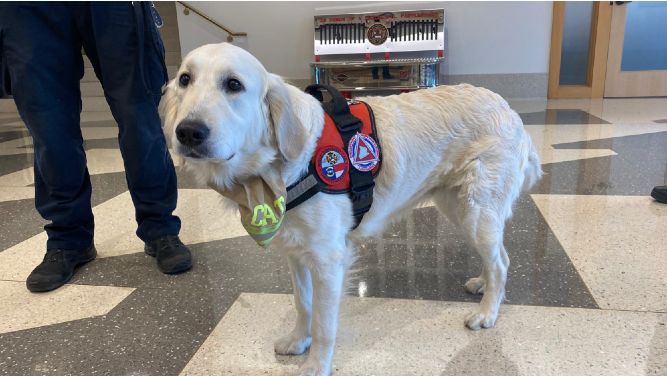 CHARLOTTE, N.C. — The Charlotte Fire Department is often the first at the scene for some scary situations. To help firefighters cope with the stress of the job, CFD added a new member to the team.

Cat is CFD’s newest firefighter. She’s an English cream golden retriever and is the department’s therapy and education dog. Rick Dunton, Cat’s handler, says the pair spend most of their time visiting the different fire stations around Charlotte.

“Our women and our men are out there working in high-stress environments. That cortisol level is up, that stress hormone, and we’re able to use her to actually lower that,” Dunton said.

He says they’ve already been on 115 visits to try and meet every shift and station crew.

“She comes to work like any good firefighter. She’s happy and ready to learn something new,” Dunton said.

Holly Johnson, a firefighter with CFD, says even a ten-minute visit with Cat makes her day better, especially after going out on the tougher calls.

“Some of the folks who don’t like to openly talk about it right away just enjoy being able to sit, and it calms them to be able to play with her and pet her and just spend time with her,” she said. “It just brings that kind of calm nature to that person that might deal with it differently rather than just wanting to chit chat about it.”

The therapy dog program has been so successful, the department is adding a second dog this year. Phoenix, a goldendoodle, will join the team this summer after she completes training.

THE RESULTS ARE IN! Say hello to Phoenix!
Phoenix is in training to join our therapy program to benefit first responders. With a dog named Cat, you know we appreciate irony. With a 2nd dog named after a bird, we know you do too!#cfddogs #cfdpride #firstrespondertherapydogs pic.twitter.com/o6pwGhuyuc