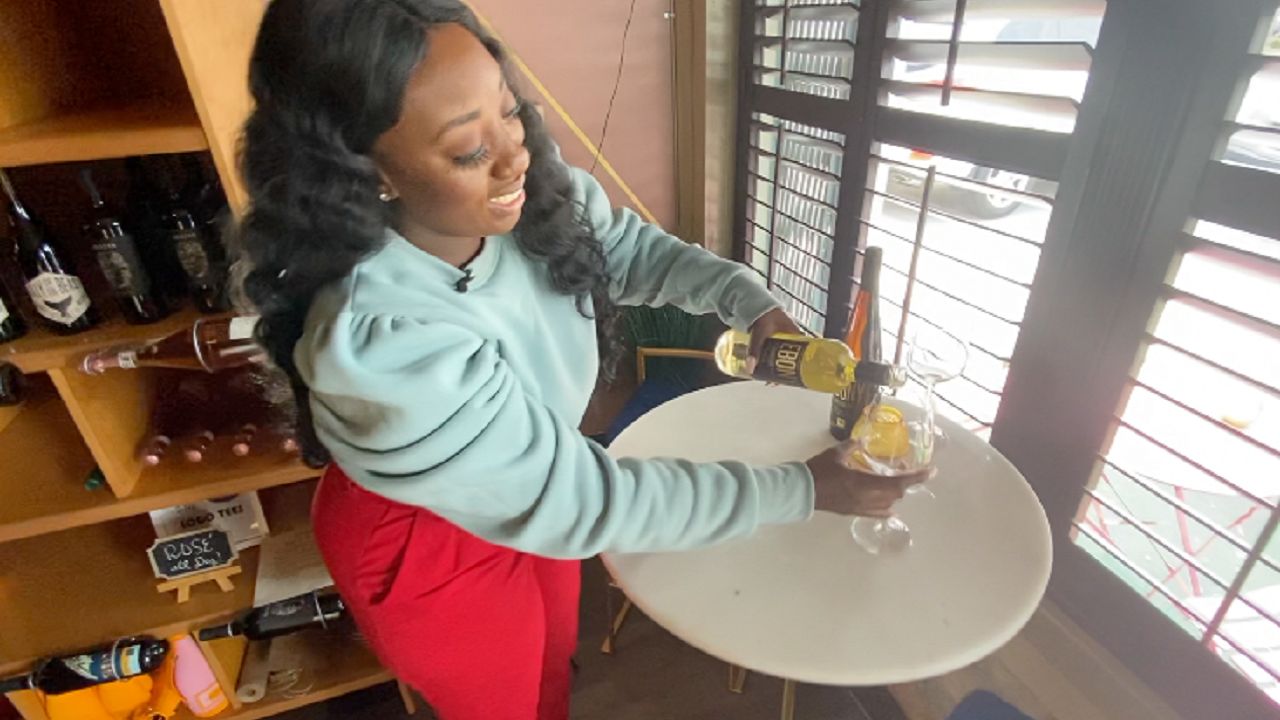 CHARLOTTE, N.C. — State travel and tourism data shows there are about 200 wineries in North Carolina. Fewer than 30 of them are Black-owned. And, the percentage of owners is even smaller when it comes to Black women.

But just in time for Women's History Month, Spectrum News 1 found one gutsy entrepreneur who's hoping to inspire a reversal of that trend, one glass at a time.

With every serve and sip, Camillya Masunda is pouring her dreams, deep-pocketed investments, and drive to be successful in every glass. She launched Ebony Wine & Spirits last September, the only Black-owned wine and spirits company in Charlotte.

Less than 1% of all wineries in the United States are owned by Black women, according to travel guide Travel Noire.

“Just doing my research and understanding that we were the 1%, I felt like it was a call to arms about what you are you going to do about it,” Masunda says.

Meant to intrigue the taste buds of even the most experienced wine conisseur, “or your girls night in wine,” Masunda adds, the brand was developed into four varietals of white and red wines inspired by her family's Congolese roots.

“Just knowing their struggles that they went through, coming here and creating opportunity for us, but also still have family there and being able to share our wine,” Masunda says.

Despite the odds facing any winery, not just one owned by a Black woman, “our grapes are from a private vineyard, small vineyard in Napa,” she says.

Ebony Wine & Spirits is currently sold in stores across the southeast, with future launches coming in New York, Texas, and Florida.

“I don't know if it's unexpected for a certain Black-owned wine to be really good, but I get a lot feedback that they're very shocked and surprised,” Masunda says.

And, from the start, she's crafted this budding business with a goal of building generational wealth. Her daughter, Lanayah, a high-achieving high school senior, is also the wine brand’s creative director.

“We really want to make a staple with the brand so when you here the word Ebony, we want this picture to pop into your mind,” Lanayah Masunda says. “And, that picture is really the Black excellence and Black luxury, and not just in Black-American culture, but in Black culture all over the world 'cause there's people that look just like you and me everywhere.”

While Camillya Masunda, a proud single mother, has figuratively climbed the ladder using her own legs, she's quick to appreciate those who gave her a leg up along the way.

“Women are out here doing things and hopefully for the ones that are not doing it, it's a opportunity for them to see what's going on and step up,” says Kimberly Wilkinson-Goines, who is owner and CEO of the Members Only Tasting Room & Social lounge in Charlotte. Wilkinson-Goines' establishment was one of the first to go sell Masunda's wines.

It's a partnership that is helping to revolutionize the world of small business ownership.

“Ebony Wine & Spirits is the celebration of culture,” Masunda says. “It's culture in a bottle.”