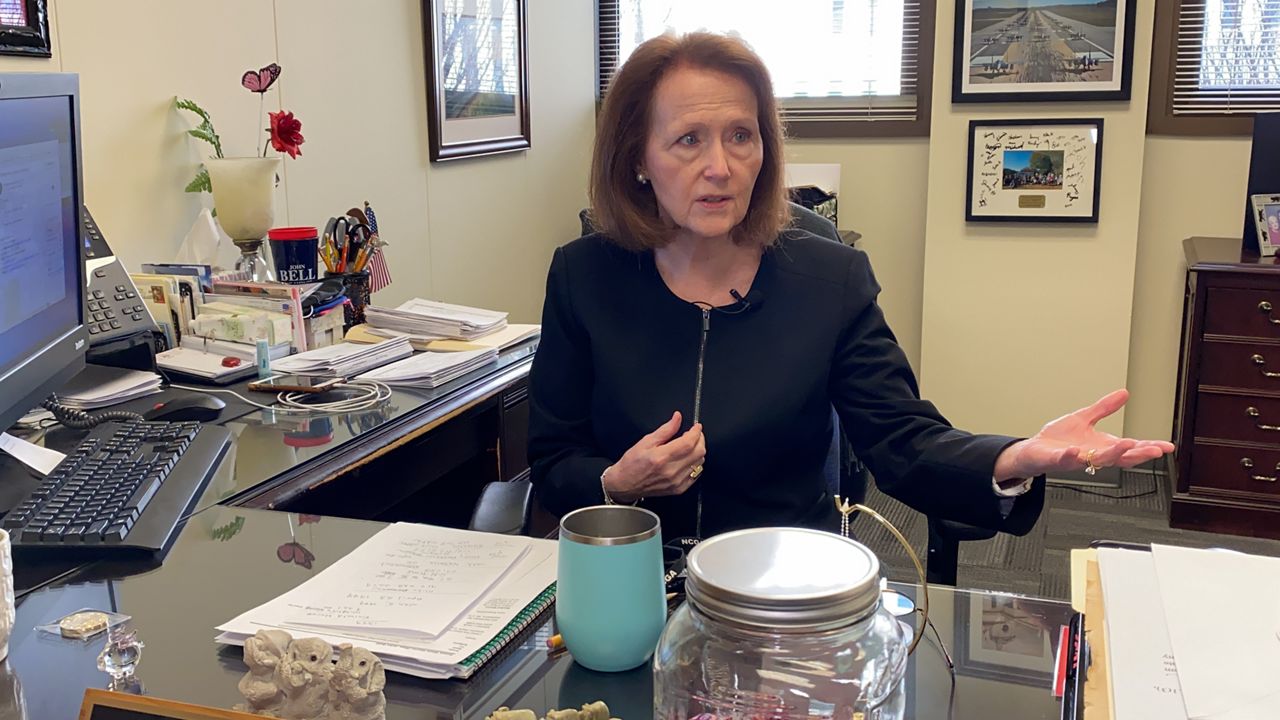 Susan Horne describes her duties in the office of NC House Majority Leader Rep. John Bell. Horne has worked at the NC General Assembly as a legislative assistant to various lawmakers for nearly three decades, a post her mother held for years prior.

A Tradition of Service at the General Assembly

RALEIGH, N.C. — Working for the house majority leader is not for the faint of heart.

Lobbyists are stopping by to push one issue or another. Lawmakers are asking to use the majority leader's conference room for informal negotiations. The majority leader has to check in with other members of leadership or handle disciplinary issues within the caucus. That's in addition to an endless stream of constituent calls and emails.

None of it fazes Susan Horne. More than three decades of work at the North Carolina General Assembly means she has already dealt with just about everything a legislative assistant can face.

“People call just to vent,” she said. “We get everything from a complaint about DMV, we get, 'can you help me with a situation I'm having with Department of Revenue'... We get calls from all over the state, actually. Some people don't know who their legislator is.”

Horne has worked at the legislature since 1987, when she joined the office of then-Senate Sergeant-at-Arms Gerda Pleasants, the first elected female sergeant-at-arms in the country. In 1992, she became a legislative assistant to Rep. Frank Mitchell. She has worked as a legislative assistant ever since to a rotating cast of state representatives. When Rep. John Bell, R-Wayne County, was elected in 2012, he hired Horne and has employed her ever since.

Horne is not the first member of her family to serve as a legislative assistant. Her mother, Helen West, held a similar position during the 1947 and 1949 sessions. At that time, state lawmakers didn't have their own legislative assistants, instead working with a secretarial pool. West returned to the legislature in 1973, spending the next 18 years in the newly-created legislative assistant role. The end of her career on Jones Street overlapped with the beginning of her daughter's.

“I would get out of college in May and I would come up here and have lunch with her,” Horne recalled. “She'd have a group of her friends and we'd all sit down and eat lunch. They'd want to know how my school year had gone. I really enjoyed that time, and it was the time that I started to get to know this building, so once I came to work here in '87, I knew the layout pretty well.”

These days, Horne has become a mentor for legislative assistants. Many of the staff working for lawmakers, some with years of experience themselves, have at one time or another turned to Horne for guidance.

“We've built up friendships over the years, and I will get questions from them if they don't have an answer and are looking for someone with a little more experience or just want to bounce an idea,” she said.

Unlike the lawmakers for whom they work, who are subject to the whims of voters, legislative assistants can theoretically remain on the job as long as they wish. When a lawmaker leaves office, their legislative assistant can apply to work with an incoming legislator, something Horne has already done more than once. Horne said the key is to enjoy your job.

“I don't think I'd be here if I didn't enjoy the people that I work with. That's half the battle in any job that you have, but that's what makes things interesting,” she said. “No two days are ever the same here.”