NORTH CAROLINA -- Protests across the country continued Tuesday, including in North Carolina.

The gatherings were predominantly peaceful. Demonstrators and police were seen all across the state shaking hands and holding respectful conversations. Many officers even took a knee with protesters in solidarity.

In Charlotte, people gathered around 4 p.m. The demonstration was organized by the NAACP and Kidz Fed Up. Despite times of escalated violence between protesters and police, crowds started to dwindle by 11:30 p.m., which was much sooner than nights prior. Charlotte did not have a curfew in place.

Things did shift around midnight when officers began to try to dispurse crowds and video showed tear gas trapping some demonstrators in a city block.

This quickly became the subject of a CMPD investigation to discover whether proper protocols were followed, which is ongoing.

Related: CMPD Investigating After Accusations of Boxing in Protesters with Tear Gas

In Winston-Salem, protesters began to gather around 5 p.m. and were peaceful. Protesters dispersed early in the evening. They remained peaceful and created a positive atmosphere, according to on-scene reporter Ashley Claster.

In Raleigh, protesters gathered in downtown around 4:30 p.m. They remained in downtown past curfew but ultimately dispersed peacefully after sitting outside the governor's mansion for a while.

CMPD announced it is looking into a disturbance that occurred on 4th Street earlier in the evening.

We are internally reviewing the circumstances that developed this evening on 4th Street to ensure policy and protocol were followed.

A few smaller groups of protesters remain in Uptown. They seem to be talking with officers on South Tryon.

Parts of Uptown remain peaceful while in others, you can still hear flash bangs. Protesters have gathered in smaller groups.

Tensions rise as protesters throw water bottle at CMPD. CMPD has deployed riot control agents for the safety of officers and protesters.

Protesters are sitting on the street at 4th and Tryon. CMPD has not broken up the gathering.

Protesters are now sitting in the middle of 4th and Tryon @SpecNewsCLT pic.twitter.com/MosJbxjIo4

CMPD arrest a protester with an AR rifle and 30-round magazines.

A protestor was just arrested with an AR Rifle with two 30-round magazines.

CMPD deploys chemical agents after dispersal orders were given. Protesters were throwing objects at officers.

After being assaulted with bottles, rocks, and chemical agents multiple dispersal orders were given. Officers gave protestors multiple avenues to leave the area. After refusal to leave, chemical agents were deployed to protect officers and the public.

CMPD has made one arrest and riot control agents were deployed.

Officers have made one arrest. Riot control agents have been deployed to disperse the crowd to keep protestors and officers safe.

CMPD says while some are remaining lawful, other protesters have begun throwing bottles of water and fireworks at officers in Uptown. Officials say one protester threw "a chemical agent" on an officer. That officer was reportedly treated on scene.

Heavy police on Brevard Street. Protesters were up the road, lots of flash bangs or explosions being heard up trade @SpecNewsCLT pic.twitter.com/SC9Rhk6RFg

CMPD says they are now giving dispersal orders to the crowds due to the escalation in violence that is putting both the safety of protesters and officers in jeopardy.

Protesters continue to march in Uptown. Throughout the afternoon and evening, leaders have discussed the systematic racism throughout the American government system as well as what needs to change to prevent another death like George Floyd’s.

From 5:30 until now they have been marching the streets of Charlotte sharing their message.

The amount of people out here is truly amazing! It doesn’t look like it’s ending anytime soon @SpecNewsCLT pic.twitter.com/QnVRAbWeb1

The amount of people out here is truly amazing! It doesn’t look like it’s ending anytime soon @SpecNewsCLT pic.twitter.com/QnVRAbWeb1

Protesters are beginning to march down 4th Street again after remaining at CMPD for 30 minutes.

Thousands of protesters gather in front of CMPD. They are chanting "take a knee", and it looks as though some officers have. There is no end in sight to the seas of people in downtown Charlotte.

You can’t see the end of the sea of protesters on either side of Trade Street kneeling right now in front of @CMPD Headquarters. Don’t know an accurate count, but definitely over 2,000 protesters and people are still joining the group @SpecNewsCLT pic.twitter.com/AJW1yurrhc 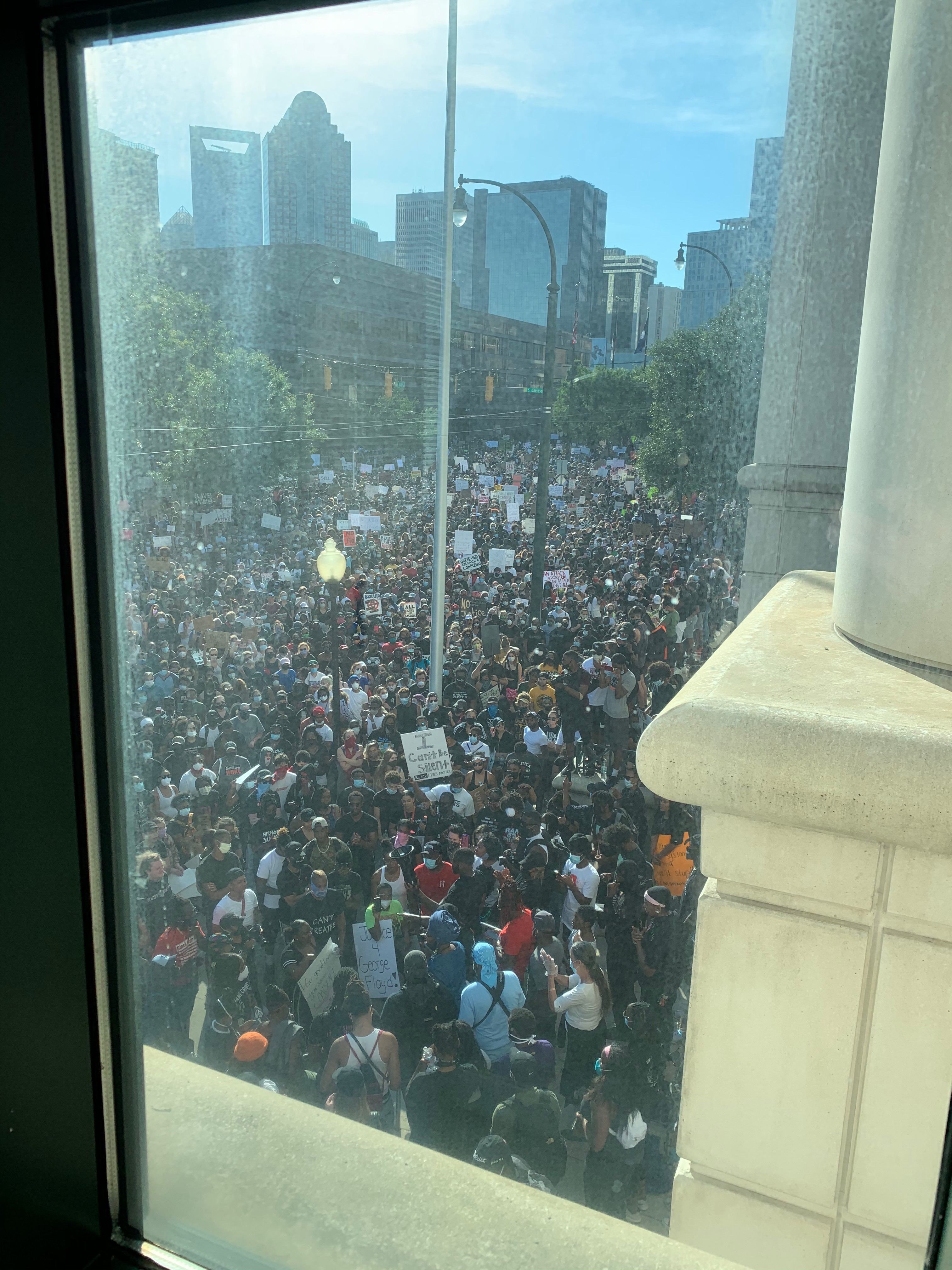 Protesters are making their way past the Spectrum Center towards the Charlotte-Mecklenburg Police Department. The crowd is spanning at least five blocks, if not more.

Around 1,000 protesters gathered by the government center. The crowd is marching down 4th Street.

And the group is now marching on 4th street @SpecNewsCLT pic.twitter.com/LhYH13LFZG

At least 400 people are gathered outside the government center. Speakers are talking about the need for police reform and for this movement to continue. Additionally they are encouraging people to keep pushing forward for change.

The entire group was kind-hearted, in good spirits and promoting positivity while denouncing police brutality.

The protest remained peaceful and positive— something opposite of what I have seen covering the protests in days past.

(2/3) Also at every intersection: a group of allies collecting trash and handing out water bottles. This is the end of the line, with @cityofwspolice following to keep them safe from traffic. THIS is the way to work together, y’all!! What an example! @SpecNewsTriad pic.twitter.com/rDnVenu4Us

Protesters are gathering in the streets. Many hold signs and people of all ages and races are joining the march.

Peaceful protest in Downtown Winston-Salem. There are a lot of allies out here today. @SpecNewsTriad pic.twitter.com/OV8UMAEB81

Protesters are still out despite the city's curfew going into effect at 8 p.m. Many have marched to and held an 8-minute moment of silence outside of the governor's mansion.

Protesters are making their way to the Raleigh Municipal Building to watch the city council meeting. Raleigh police take a knee with hundreds of protesters.

Hundreds of people remain in the downtown streets of Raleigh. Curfew begins at 8 p.m.

Community groups gather in Raleigh to speak out against racism and state a list of demands to city leaders to improve race relations. @SpecNewsRDU pic.twitter.com/r0i5GlkezI