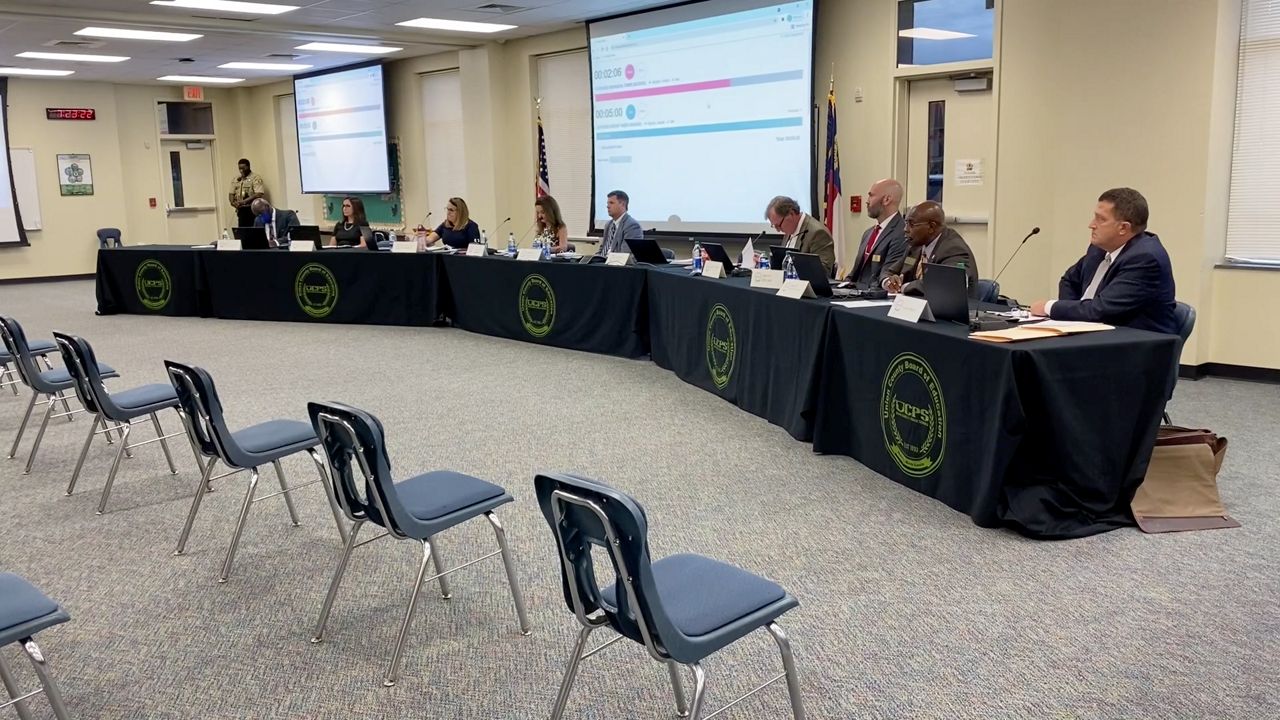 UNION COUNTY, N.C. — A Union County mom and other parents are calling for the resignations of three Union County Board of Education members.

The group, named SOS Union County, started a petition, which calls for Chairperson Melissa Merrell and board members Jimmy Bention and Gary Sides to resign.

What You Need To Know:

After the weeks-long back and forth between the UCPS’ Board of Education, NCDHHS and the county public health director over contact tracing and quarantine responsibilities, parents wrote they had enough.

“I mean these are my children, and if the board of education isn’t going to protect them and do what’s in the best interest, then we as parents have to be more vocal about it and let them know what our thoughts are and work to make changes to make the schools safe for our kids,” Erika Ayotte said.

Ayotte, who is a moderator on the SOS Union County Facebook page, said the group is focused on Merrell, Sides and Bention because of their explanations for votes and other decisions.

“They seem to be the ones that are not really looking at the data and the science. The examples of other schools that have gone without mask mandates, any time it is brought up they kind of push it aside,” Ayotte said.

Since the school year began, the board has voted repeatedly against mask mandates for students and staff. More recently, the board voted to stop UCPS employees, mostly school administrators and nurses, from contact tracing and ordering quarantines for close contacts of COVID-19 positive students and teachers.

The decision created controversy, as the NCDHHS secretary and local public health director threatened to intervene with legal action if the board did not do more to facilitate county staff in their effort to contact trace and quarantine.

However, near the end of September the county and UCPS signed a memorandum outlining responsibilities for both parties.

“Union County Public Health and Union County Public Schools have agreed on a process for identifying and excluding students and staff who are identified as being a positive case or a close contact of someone who tested positive for COVID-19,” a UCPS and county statement stated last week.

But Ayotte said the decision, and fallout over who was responsible for contact tracing, caused her family more confusion.

Her son was a close contact of a positive classmate, but the county did not reach out to the family until last Saturday. Ayotte said she is not sure when her son was exposed to the positive case and said she was the one who informed the school he needed to quarantine.

Her 10-year-old son and his 8-year-old brother attend Kensington Elementary. Besides two virtual classes, emailed quizzes and other assignments, his day is spent playing video games while mom and dad work.

“He’s not getting any actual instruction. So, that’s hard, it’s also — he’s not socializing at school,” Ayotte explained.

It’s why she wants the board to implement a mask mandate. Under a mask mandate, her 10-year-old would not have needed to quarantine if both students had been wearing a mask at the time of exposure. Ayotte said she knows her kids do better in a physical school setting and wanted them back in the classroom this year.

“My kids didn’t really thrive doing virtual, and my youngest is in the Mandarin immersion program. So, it was hard for me to be able to help him with schoolwork,” Ayotte joked.

Her desire for a mask mandate led her to join like-minded parents in a Facebook group called SOS Union County. Due to Facebook’s technical issues on Monday, a link to the group was not available.

“With a mask mandate, they can go to school, unlike my son who’s now been home twice. So that to me has been not the best situation,” Ayotte said.

Some of the same board members the group is urging to resign have been supporters of optional mask policies, voting repeatedly through this summer and fall to keep them optional. Bention said he has no plans to change his vote.

“Oh no, there will be no vote changing on my side unless something comes up that is so astronomical — that blows me away,” Bention said.

Bention, who’s been on the board since 2020, said he remains against masking children for the entire school day and quarantine policies, which he said send healthy kids home.

“Sending kids home who are not sick, that’s not good. It’s not good,” Bention emphasized.

When asked to respond to Ayotte’s criticism he was not following the science, Bention said it is his view the science has been inconclusive.

“When people talk to me about the science, and they want to express things like, ‘The scientific community universally agrees,’ that is not a correct statement,” Bention said.

He also has no plans to resign.

However, he said he respects the petitioners, and specifically Ayotte, for taking part in democracy and vocalizing their beliefs.

“I encourage them to do what they feel, what they believe. They just need to know that I’m going to do what I believe,” Bention said. “I respect them because they are stating how they feel. Too many times you deal with people who don’t state how they feel.”

Bention, a veteran and two-time member on the UCPS Board of Education, said he respects the parents and students for participating in the democratic process. He said he had hundreds of emails expressing support for how the board was conducting itself in regard to COVID-19 policies.

“The majority of those emails support us, the majority. Way majority, I don’t even want to make it seem like it’s 50-50, it’s way more than the majority,” Bention added.

As of Monday afternoon, Merrell and Sides had not responded to requests for comment.

In a Union County commission meeting on Sept. 20, Merrell defended the board’s actions, highlighting how in her view the decision to return to in-person instruction last year led to the district’s high test scores compared with the rest of the state.

“Our school district is No. 1 in the state,” Merrell told the commissioners, “With all the naysayers last year criticizing us when we chose to open our doors, and put our tax dollars to use, and provide an in-person learning option to the 82% of parents that wanted that option. They wanted their children in the schools, with our phenomenal teachers, and their administrators. It came out last week, Education NC, we were the No. 1 ranked school district for the first time in the history that I can remember.”

“No, I wasn’t in favor of masking, I don’t believe in masks. But what I was not in favor is throwing caution to the wind and doing no contact tracing, no quarantine, no nothing. It’s kind of like playing Russian roulette with our children, and that I am totally against,” Helms said during the Sept. 20 meeting, before he and other commissioners voted 3-2 against a show of confidence in the board.

The Union County Board of Education’s next meeting is Tuesday, Oct. 5 at 7 p.m.