KERNERSVILLE, N.C. — If you grew up in North Carolina, lunch wasn’t a complete meal unless you had a sandwich smothered with a slightly spicy, tangy cheese mixture known mostly just to those who live south of the Mason-Dixon Line.

Some call it Carolina Caviar, others Southern Pate, but most of us know it as Pimento Cheese.

"I think it's because it's so simple, you know for us we only use three ingredients, which is cheese, mayo and pimento, that's it, nothing else, no spices, no extra other stuff," John Crutchfield, owner of Musten and Crutchfield Food Market said.

Crutchfield's great-grandmother created the original recipe back in 1938, and it’s been passed down through generations.

"The timeframe she was living and the economic hardships that they had, it was something that they had on the farm that they could make something out of, and it was quick and easy for her to make sandwiches to feed her family with," Crutchfield said.

Crutchfield says the simplicity makes it so special, and that’s what keeps fans of the creamy spread coming back for more. 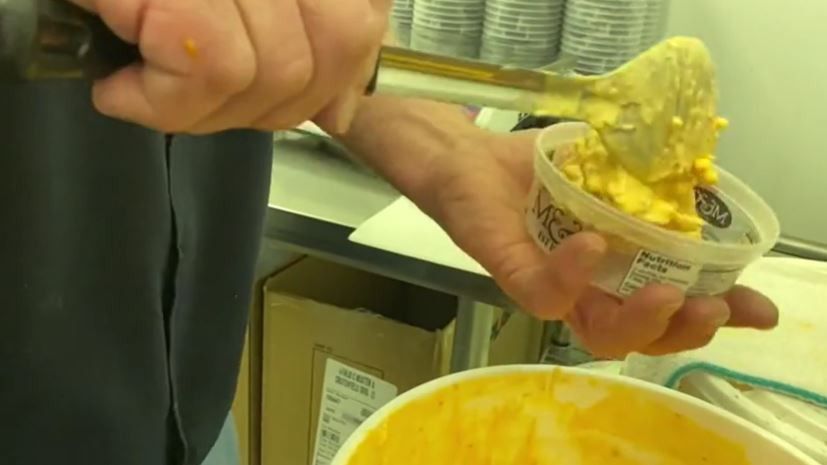 "Some people say it's their favorite because it's what they grew up with. Some have moved to the area from you name the place, and have never tried it before, and they just fall in love with it," Crutchfield said.

It’s sold inside Musten and Cutchfield in downtown Kernersville, N.C. and in major grocery stores, like Walmart, Food Lion and Lowes Foods.

"Things that are made here in North Carolina, we wanted to have as many of those products as we could, and that's one of the things that helped bring us into the specialty food market we are in now," Crutchfield said.

But pimento cheese is what kept the store going for many years, and Musten and Crutchfield is working to keep the business in the family.

"We started out as a grocery store. Pimento cheese was an offering, but then the pimento cheese became a focal point. It's obviously what we're known for, but that's also what was keeping the doors open for a long time,” Crutchfield said.