An attendee appreciates one of the pieces in the Continuum of Change.

WILMINGTON, N.C. — Many people are familiar with the Wilmington Massacre of 1898, which was a mass riot and insurrection led by white supremacists. While that event is and always will be important to understanding Wilmington’s history, one group is focusing on the events leading up to the massacre and the push for change since.

The hope is that this art can promote change, and difficult, yet important conversations

When thinking about history, we often think about the main events, such as the Wilmington Massacre of 1898 where white supremacists overthrew the lawfully elected and mostly Black government in Wilmington. It was the only successful insurrection on United States soil and a very dark chapter in our history. 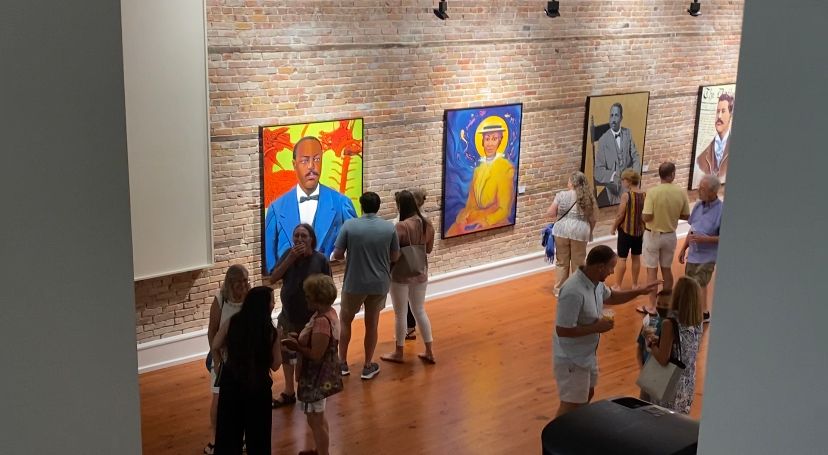 The art gallery is busy with attendees.

But what sort of hardships, inequalities and prejudices plagued the years leading up to the massacre? That’s the thought behind a new art show in Downtown Wilmington called Continuum of Change, part of a larger project called Initiative 1897.

The show highlights historical figures who helped initiate change in the Port City.

“Eighteen ninety-seven does not mean that Wilmington was a perfect place by any stretch of the imagination,” said Michael Williams, an independent curator and consultant. “But do we have a stretch of individuals who persevered in spite of, and that’s what I really want people to think about, you persevere in spite of what’s going on around you, cause we can do it.”

“I think it’s beautiful,” said Meredith Pickney, an attendee from Wilmington. “And I think it’s so interesting to see the different mediums used and just to learn about these people's stories that we hadn’t learned about before.”

More than learning about those individuals, the art show is a way to promote conservation around difficult topics and promote change.

“Art is just a way for us all to unpack complex issues and understand each other better,” Williams said. “And that’s what we’re here to do, so no matter what community I work in, it’s always important to use art as the medium for change.”

Although 1897 was over a century ago, the issues are still very much relevant today. 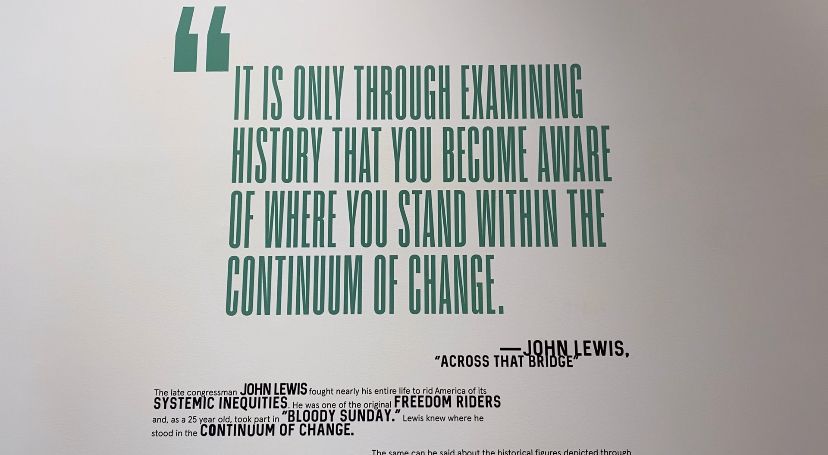 The John Lewis quote on display in the gallery.

“None of this stuff is new, we’ve seen it before,” Williams said. “So let’s look to the past and then move towards the future. That’s why the John Lewis quote is so important, what will our legacies be, where will we be within the continuum of change.”

If there’s one thing that can be taken from visiting the gallery, it’s the hope for a brighter future built from facing a difficult past.

“We want people to come in the gallery, continue to have these meaningful dialogues, learn from one another, learn from these historical figures, listen to these Black people telling you about experiences and let’s move forward together,” Williams said. “Let’s try to really make some tangible things happen, and that’s gonna make us uncomfortable, but I think uncomfortable is good, and I think if we can all stand to be a little uncomfortable, we’ll be better off.”

Initiate 1897’s Continuum of Change will be on display in Downtown Wilmington until August 27 and is free and open to the public.  If you would like to learn more about the show, you can read about it here.