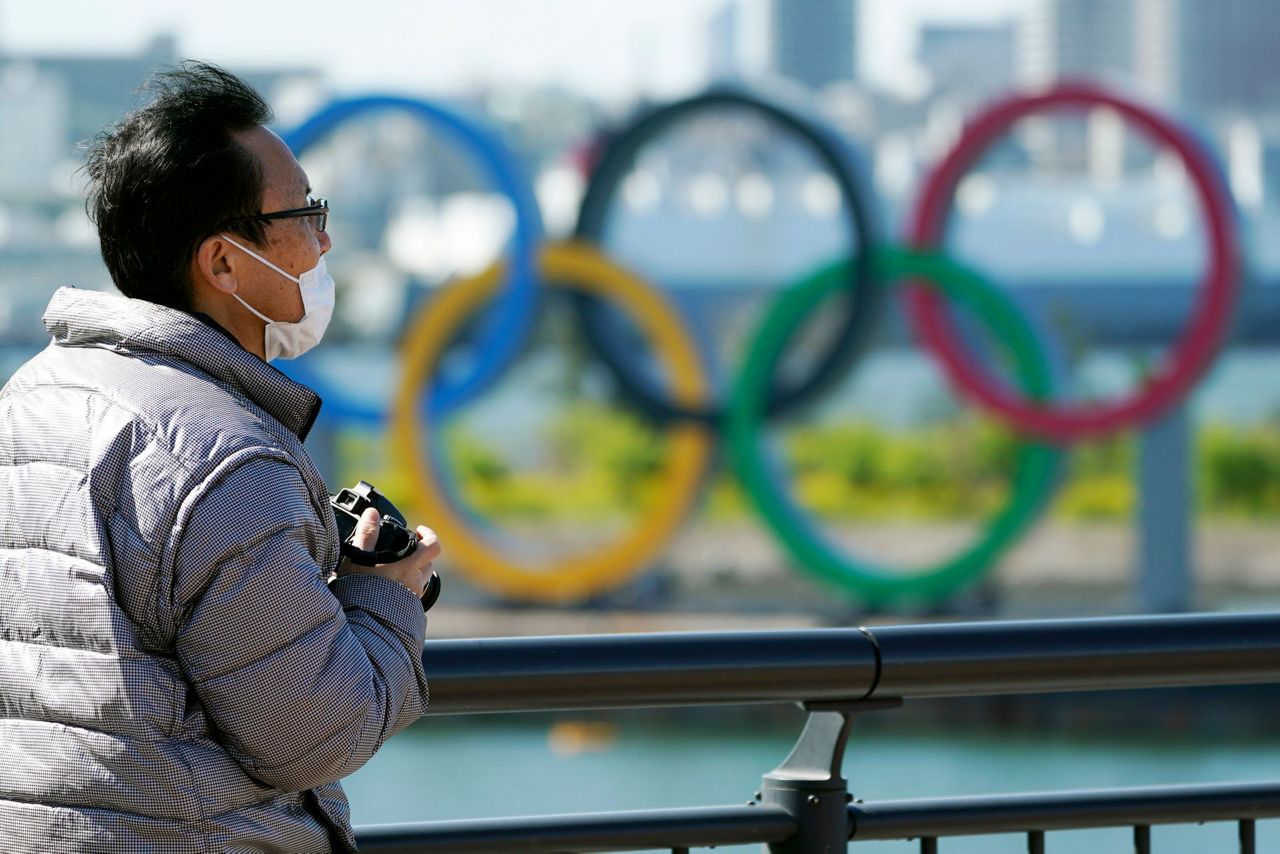 A visitor wearing a face mask stands near the Olympic rings at Tokyo's Odaiba district Tuesday, March 24, 2020. The Tokyo Olympics are probably going to happen, but almost surely in 2021 rather than in four months as planned. (AP Photo/Eugene Hoshiko)

The Latest: European club rugby finals in May suspended

The Latest on the effects of the coronavirus outbreak on sports around the world:

The track world championships in Eugene, Oregon, could be moved from 2021 to 2022 after the Olympics were postponed.

World Athletics says it is talking with organizers about “alternative dates, including dates in 2022.”

The championships in Eugene are due to run from Aug. 6-15, 2021. That would conflict with the Olympics if the same July-August slot as originally planned for 2020 is used next year.

World Athletics adds that it is looking at a new qualification system to account for the postponement and for the havoc wreaked on the 2020 schedule by the coronavirus outbreak.

The president of the International Paralympic Committee says postponing the Olympics and Paralympics to 2021 was “the only logical option.”

The Paralympics are governed by the same contract as the Tokyo Olympics.

IPC president Andrew Parsons says “by taking this decision now, everyone involved in the Paralympic Movement, including all Para athletes, can fully focus on their own health and well-being and staying safe during this unprecedented and difficult time.”

USA Cycling chief executive Rob DeMartini tells The Associated Press that athletes were surveyed over the weekend by the U.S. Olympic and Paralympic Committee and that the consensus was that postponing the Tokyo Games was the correct call.

DeMartini says “training disruption and qualification challenges are too big to overcome even if the environment returns to a degree of normal by late summer."

DeMartini says that he is a fan of a “soonest possible” reschedule but not until the situation is a bit more predictable. That could mean early in 2021 or an Olympics that is pushed into the fall of next year.

DeMartini says “we just need to be sure everything is being done to protect their safety."

IOC president Thomas Bach says he did not discuss new dates for the 2020 Tokyo Olympics in talks with Japanese Prime Minister Shinzo Abe.

One option would be July 23-Aug. 8. That is exactly one year from the now-postponed July 24-Aug. 9 dates.

Bach says the exact dates is a question for the Tokyo organizing committee and an International Olympic Committee panel overseeing the preparations.

Swimming and track have their biennial world championships scheduled to start in July or August 2021.

IOC president Thomas Bach says “alarming figures” in the past few days about the coronavirus were key to deciding the Tokyo Olympics must be postponed.

Bach cites the World Health Organization “saying in the last couple of hours that Africa has to prepare for the worst.”

The IOC has been advised by the WHO, which said Monday the pandemic is accelerating.

Bach says the original health issue for hosting the Tokyo Olympics was “could Japan offer a safe welcome" and the IOC was confident it could.

The Tokyo Olympics have been officially postponed until 2021.

The International Olympic Committee along with Japanese Prime Minister Shinzo Abe and local organizers have decided that the Tokyo Games cannot go ahead as scheduled this year because of the coronavirus outbreak.

The IOC says the games will be held “not later than summer 2021” but they will still be called the 2020 Tokyo Olympics.

Japanese Prime Minister Shinzo Abe says IOC President Thomas Bach has agreed “100%” to his proposal of postponing the Tokyo Olympics for about one year until 2021 because of the coronavirus outbreak.

Bach had previously said the IOC would make an announcement about postponing the 2020 Olympics in the next four weeks.

The start of the Taiwan-based Chinese Professional Baseball League's season has been delayed twice this month because of the coronavirus pandemic.

The CPBL's website says the opening game would go ahead in a closed stadium but there could be up to 150 season ticket holders allowed entry under strict social distancing guidelines if the government approves.

Sports leagues across Asia have been postponed or suspended because of the virus outbreak. The professional baseball and soccer leagues in Japan are aiming to start or resume their seasons in late April.

Abe says a postponement is unavoidable if the 2020 Games cannot be held in a complete manner amid the coronavirus pandemic.

Abe held telephone talks with Bach after IOC said it would make a decision on the Tokyo Games over the next four weeks.

The European club rugby finals in May have been suspended because of the coronavirus outbreak.

Governing body European Professional Club Rugby announced the decision a day after a conference call by the board.

The Champions Cup and second-tier Challenge Cup had already suspended the quarterfinals scheduled for next month. Now the semifinals on May 1-3 and the finals in Marseille set for May 22-23 are off.

The Tokyo Olympic torch relay will start Thursday as planned in northeastern Fukushima prefecture but with no torch, no torchbearers and no public because of the coronavirus outbreak.

There will be an Olympic flame carried in a lantern and transported by a vehicle along what organizers hope will be empty roadsides.

The Tokyo Games and the relay have been caught in limbo since International Olympic Committee President Thomas Bach said four weeks were needed to decide on an inevitable postponement of the planned opening on July 24. He has ruled out a cancellation.

Australian soccer's A-League has suspended its season indefinitely because of the coronavirus outbreak.

That brings an end to all professional football competitions in Australia and New Zealand.

Football Federation Australia chief executive James Johnson says the latest measures imposed by the federal government made it impossible for the A-League to continue. The league had only a few regular-season games remaining before the playoffs. Johnson said the postponement will be reviewed on April 22.

Johnson says “as a national competition played in all parts of Australia, as well as New Zealand, mission complicated became mission impossible.”

Newcastle's 2-1 win over Melbourne City at an empty stadium on Monday was the last game completed. Sydney FC leads the standings with 48 points after 20 games.